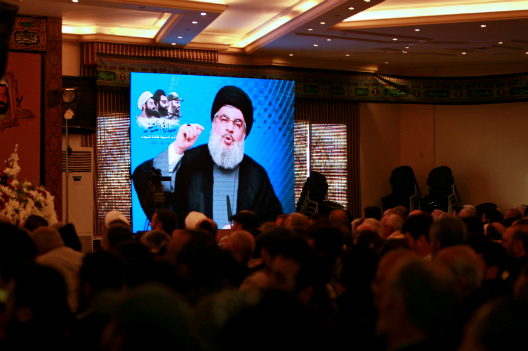 The past several weeks have been good for Hezbollah—both in their domestic stronghold in Lebanon and their Syrian areas of operation. In Lebanon for example, President Michel Aoun recently went out of his way to uncharacteristically praise the group’s militia. Though many other Lebanese politicians attempted to walk back his phrasing, the President’s words illustrated a changing relationship between the Lebanese government and Hezbollah.

There have also been a series of reports confirming ongoing negotiations between Hezbollah and rebel factions to return Syrian refugees from the northern Lebanese town of Arsal to the Qalamoun region. This, coupled with Secretary General Hassan Nasrallah’s recent announcement that a war with Israel in 2017 is unlikely, represents a new and increasingly entrenched phase of Hezbollah’s involvement in Syria

Having in large part won Aleppo for the regime while successfully maintaining security along Lebanon’s southern border, the party now appears to be in the process of solidifying its gains, while simultaneously acting more like an independent sovereign actor.

Though the exact details of the deal are murky, the basic outlines were laid out by several media reports. Hezbollah’s media spokesperson confirmed that, “through mediators and under specific conditions, a certain amount of refugees will be returning to certain villages in the western Qalamoun.” These conditions included amnesty for rebel fighters, with security in the resettled villages provided by the rebel group Saraya Ahl al-Sham, whose ranks would be exempt from mandatory military service.

Saraya Ahl al-Sham would also be responsible for appointing local administrative committees in towns included in the deal and establishing local police forces. A group of Hezbollah leaders would oversee the process, but play no direct military role in the resettlement areas. However, Hezbollah would provide a general security umbrella for the region: some areas would remain “military zones,” subject to direct Hezbollah control, and the party is identified as the “guarantor” of the agreement.

Notably, several sources also confirmed that neither the Lebanese nor Syrian governments had direct involvement in the negotiations. Though this is obviously not the first time that Hezbollah has acted independently in the Syrian conflict, it is one of the first times that the group has taken over the tasks normally ceded to the state—including security provision, resettlement, and diplomatic negotiation.

With this move, Hezbollah looks to be transitioning from a purely military force in the Syrian conflict to an enduring domestic actor—capable not only of clearing territory for the Assad regime, but also guaranteeing and facilitating long-term security policy, local policing, and population movements.

Though the group has long had an interest in securing Qalamoun as an essential overland supply route from Damascus to strongholds in Lebanon’s Bekaa valley, this time the means may be more symbolic than the ends. While most analyses of Hezbollah’s role in Syria focus primarily on its improved military capabilities after years embedded with Iranian and Russian forces, its role as a guarantor of security will only become more important going forward.

Similar to the group’s role in southern Lebanon, where it solidified its presence and political clout via a combination of security guarantees, infrastructure spending, and social services provision, it seems to be solidifying its presence in Qalamoun. Lebanese even report that, as part of the required service when joining Hezbollah, they might be sent to Syria instead of southern Lebanon. It would be unsurprising to see the group engaging in similar activities throughout its area of operation in the future. Most importantly, it sends a clear message to both the Lebanese and Syrian governments that the group is capable of acting independently to accomplish its strategic objectives.

Unlike southern Lebanon however, Qalamoun is outside the Lebanese government’s jurisdiction, and the Syrian government is too weak to independently control the area, allowing Hezbollah to potentially establish its own independent statelet. Doing so would give it more leverage when dealing with the Syrian, Lebanese, and Iranian governments, especially as violence winds down in other parts of the country. While Iran has acted as the group’s patron for decades, Hezbollah is still capable of acting independently on its strategic prerogatives. Though the group treads a fine line between distancing its Iranian funders and pursuing its own aims, both Iran and Syria currently rely too heavily on the group for actions like this to alienate it from its funding sources.

Moreover, Hezbollah’s increased autonomy does not necessarily clash with Iran’s strategic objectives. In reality, it is likely that these moves strengthen Iran’s future bargaining position in Syria by giving it loose yet de-facto control over strategically important territory, even while accounting for Hezbollah’s independence. Therefore, unless the group suddenly decides to start actively compromising Iran’s influence—a highly unlikely scenario—the risks posed by a move like this are relatively minor.

Nevertheless, several factors are still unknown: first, the deal is not yet complete, and numerous details still need to be worked out—importantly the role that Hezbollah might play in reconstructing the area. Second, if refugees begin to return to Qalamoun, it remains to be seen what soft-power role Hezbollah will play. If, as they did in the south, they begin to take on an explicitly administrative function beyond simply providing security guarantees, this would represent a unique turning point.

Third, there is talk of resistance to the proposed moves on the part of several Lebanese political parties. Though there is little chance that the Lebanese government would be able to step in to prevent the group from pressuring refugees to return to the Qalamoun region, the agreement could generate a deeper rift between it and other groups in the country.

In short, moves to act as an independent negotiator in the parts of Syria that Hezbollah deems strategically important—combined with cautious rhetoric surrounding Israel—represent a new stage of Hezbollah’s engagement in Syria. With military successes throughout the country and a calm Lebanese border, the group is finally in a position to secure its military gains through the kind of soft power coordination that allowed it to thrive for decades in south Lebanon.

Rhys Dubin is a Beirut-based journalist for The Daily Star newspaper. His work focuses on Lebanese politics and regional security. Twitter: @Rhys_Dubin