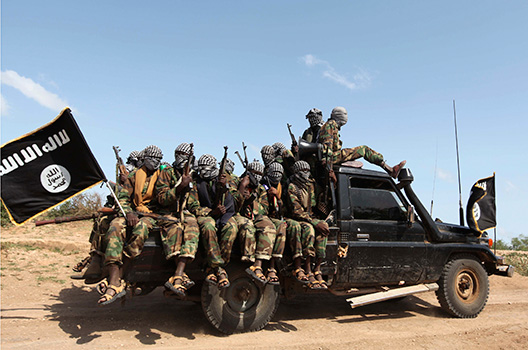 Ahmed Abdi Godane, leader of al-Shabaab, the Somali terrorist group and al-Qaeda affiliate, may have been killed in a US airstrike on Monday. The Pentagon said on Tuesday that the military was gunning for Godane in the strike and that it was confident it hit the target, though there is no confirmation Godane is dead.

If he is, al-Shabaab will be dramatically altered. The group has been divided since its inception between leaders such as Godane with a global, al-Qaeda-like agenda, and those with a nationalist agenda interested in controlling Somalia and Somali-populated areas outside its borders. Godane definitively won the argument just over a year ago when he purged all of his serious rivals to power. Only two wriggled away; Sheikh Mukhtar Robow, who fled to his Rahanweyn clansmen, and Hassan Dahir Aweys, currently languishing under government house arrest.

The purge, and Godane’s earlier dissolution of the group’s Shura Council, a consultative body of senior leaders, left him solely in charge and his organization vulnerable to a decapitating strike. If Godane is dead, al-Shabaab for the moment is rudderless with no groomed successor or institutions to stabilize the organization.

One possible Godane successor is Mohamed Abdikadir Mohamed—also known as “Ikrima”—the man US Navy Seals unsuccessfully targeted in 2013. Ikrima is a strong candidate as he is already an established al-Shabaab leader and has strong connections with at least one other al-Qaeda group and with al-Hijra, the Kenya-based al-Shabaab affiliate.

But Godane’s death would also likely embolden the nationalists who fell from grace last year. Aweys is out of the picture as the government is not going to release him from house arrest. Robow, however, is a former leader of al-Shabaab and has a powerful clan constituency; the Rahanweyn once constituted the majority of al-Shabaab’s foot soldiers. He could make a compelling claim to the Emirship.

There is likely to be intra-Shabaab violence before the succession issue is settled, and the real possibility the group could splinter. There is also another complication. The Amniyat is al-Shabaab’s feared intelligence and assassination unit whose members are highly-trained and loyal to Godane. They are considered ideologically committed to global jihad and could be a powerful advantage for a global jihadist leader during a succession struggle.

Any of the possible scenarios are of concern to the international community. Ardent nationalists in Somalia are often irredentists claiming the Somali-populated regions within Ethiopia and Kenya and all of Djibouti, so even a nationalist al-Shabaab is likely to be a destabilizing regional threat.

And a nationalist movement inside Somalia could still be hijacked by global jihadists as al-Shabaab was by Godane. In remarks here at the Atlantic Council on Tuesday, Senior Somali Counterterrorism Adviser Hussein Mahmoud Sheikh-Ali described Somali society as “radicalized.” Extremist strains of Islam, including the Salafi-Jihadism of the Islamic State, al-Qaeda, and Godane, are gaining ground inside Somalia and creating a growing constituency for any global jihadists trying to build a following.

Perversely, a Godane-less al-Shabaab might be more dangerous to the Somali government than the current iteration of the group. Al-Shabaab reached its zenith as a nationalist movement fighting a 2006 Ethiopian invasion, but its popularity ultimately withered due to its callousness and outright brutality. An al-Shabaab that can convincingly cast itself as resisting foreign occupation—Ethiopia is back inside Somalia, along with five other national armies under the African Union Mission in Somalia umbrella—and a corrupt, foreign-imposed government, would win back support from many Somalis, making it an even more formidable opponent.

A nationalist al-Shabaab is also a conundrum for the international community. Such a group would not be a direct threat to the West, though it would remain a menace to allies in the region. Western strikes against nationalists, and support for a central government losing the legitimacy battle to al-Shabaab, would be counterproductive—both would only stir anger and boost support for the nationalists. In such a scenario, the international community would have to fundamentally rethink its strategy in Somalia.

But Monday’s airstrike has given the government an opportunity to make further progress against al-Shabaab. Godane ruled with an iron fist, and his absence may encourage non-ideological al-Shabaab members to risk defecting. The government’s just-announced amnesty for al-Shabaab fighters is a good start, though its success will depend on an effective disarmament, demobilization, and reintegration strategy. Unfortunately, the government’s spotty record suggests it is unequal to the task.

In the midst of the debate over Godane’s fate it is worth remembering that Somalia was a failed state before al-Shabaab appeared. It is cheering that he may no longer be with us, but even eradicating his group would not solve the many other problems blighting Somalia. Al-Shabaab is a symptom of a badly fractured society and a collapsed state. Until a reasonably honest, competent, and legitimate government exists, extremist groups like al-Shabaab, and men like Godane, will continue to harry Somalia and the region.

Meservey is the Africa Center’s assistant director. You can find him on Twitter at @JMeservey.