Hours after Russia launched its invasion of Ukraine on February 24, Russian President Vladimir Putin called his Iranian counterpart Ebrahim Raisi to inform him about Russia’s “special military operation.” During the call, Raisi expressed Iran’s understanding of Russia’s security concerns and affirmed the country’s contention that “NATO expansion is a serious threat to the security and stability of independent nations.”

To an extent, Iran’s support for Russian actions reflects the improvement in bilateral ties, which have grown considerably at the political and military levels over the past decade. Russian and Iranian cooperation in the Syrian Civil War—though not without problems—when combined with their mutual antipathy towards the West, has led to greater coordination on overlapping goals and interests. Iran’s response to the Russian invasion of a sovereign state stands out in its particularly pronounced pro-Russian stance—a contrast to Moscow’s traditional allies, such as Kazakhstan.

Official statements from the Iranian Foreign Ministry have indicated Tehran’s preference for a peaceful resolution of the conflict, while directly or indirectly blaming the United States for provoking or exacerbating the fighting. Iran’s foreign ministry spokesman Saeed Khatibzadeh called for a ceasefire and “immediate negotiations for a political resolution of the crisis” consistent with “respect for international law and human rights.” Iran’s Foreign Minister Hossein Amir-Abdollahian attributed the current crisis to “NATO’s provocative actions,” adding that Iran doesn’t see “resorting to war as a solution” and underlined the necessity of establishing a ceasefire for a diplomatic solution.

Tehran will likely remain hesitant to support Moscow’s direct challenge to Ukrainian territorial integrity by recognizing the Russian-backed separatist republics in the East. Iran’s abstention during the United Nations General Assembly (UNGA) vote on March 2 illustrates this balance between Tehran’s relations with Moscow and its hesitancy to endorse separatist claims. Still, the intervention holds considerable implications for the trajectory of the Russia-Iran relationship, as both face similar challenges from the West and economic sanctions.

Iran’s willingness to extend solidarity to Russia over its opposition to an enlarging NATO hasn’t entailed a recognition of the Donetsk People’s Republic or the Luhansk People’s Republic. Consistent with Iran’s positions on Georgia in 2008 and Crimea in 2014, Tehran has neglected to support Moscow’s challenges to Ukraine’s territorial integrity—an outgrowth of Iran’s concerns about separatism and irredentism with its Kurdish, Baloch, and Ahvaz Arab minorities.

Following the 2008 Russo-Georgian War and Russia’s recognition of the breakaway republics of South Ossetia and Abkhazia, Tehran eschewed endorsing Russia’s support for separatism yet adopted a notably accommodating position in other ways. This balance reflected Iran’s reliance on Moscow to block or water down United Nations sanctions and then-President Mahmoud Ahmadinejad’s tendency to exploit anti-Western sentiments. Ahmadinejad went so far as to try to justify Russian actions by suggesting that the conflict arose due to Georgia’s acquiescence to foreign interference and Western pressure to join NATO. Iranian non-recognition of the independence of South Ossetia and Abkhazia wasn’t an isolated phenomenon. In fact, it paralleled its opposition to Kosovo’s independence in 2008, when Tehran joined Russia in affirming Serbia’s territorial integrity.

Iran followed a similar logic to that of Georgia during the 2014 Ukraine crisis. Iran didn’t recognize Russian territorial claims to Crimea, while still parroting Moscow’s narrative about foreign interference in Ukraine. Iran’s then-Ambassador to Moscow Mehdi Sanaei clarified that Iran is “against the interference by foreign countries” in the conflict in Ukraine and that “issues that arise in a region should be resolved within a region.” Iran’s notable absence during the 2014 UNGA vote on Ukraine’s territorial integrity underscored Tehran’s balancing between its relationship with Moscow and its nervousness about self-determination by minority groups.

Even though Iran initially refrained from supporting initiatives that directly undermined the international legal basis of Ukraine’s territorial integrity, Tehran shifted towards greater accommodation of Russian positions around mid-2018, following the US withdrawal from the Joint Comprehensive Plan of Action (JCPOA) and the inception of the Donald Trump administration’s “maximum pressure” campaign. Since then, Iran has proposed amendments to resolutions in the General Assembly that favor Russia’s positions on the 2018 Kerch Strait Crisis between the Russian coast guard and Ukrainian navy, and the now-defunct Minsk process which was established to solve the problem in Eastern Ukraine. Moreover, Iran has joined states such as Bolivia and Syria in voting against resolutions condemning Russian aggression and misconduct in Ukraine. According to Iran’s ambassador to Ukraine, the rationale behind the shift was the country’s voting record on human rights issues in Iran. This, combined with Tehran’s strained relations with Kyiv following the 2020 shoot down of a Ukrainian passenger airliner that killed all 176 on board and the US assassination of Quds Force Commander Qassem Soleimani, appears to have factored into Tehran’s pro-Russian shift.

Following the Russian annexation of Crimea in 2014, Moscow managed to compartmentalize the schisms with the West with its commitment to achieving an agreement on Iran’s nuclear program. Russia’s current military intervention in Ukraine has yet to derail ongoing talks in Vienna, although it could be a potential complicating factor. Due to Russia’s involvement in Iran’s civilian energy sector and technical expertise, Moscow is expected to once again play a crucial role in the technical side of the JCPOA, such as assisting with the removal of excess uranium and with civilian nuclear energy projects.

There have been indications that Russia sought to leverage its support for the JCPOA with Ukraine. On March 5, Russian Foreign Minister Sergei Lavrov demanded the US provide guarantees that Western sanctions imposed on Russia over Ukraine wouldn’t damage its cooperation with Iran. The comments from Lavrov suggest that Moscow has identified cooperation on the JCPOA as a potential area to elicit concessions from the West in relation to Ukraine.

Iran has embraced Russia’s anti-Western narrative over Ukraine, portraying the intervention as a harbinger for the West’s decline. Tehran’s proclivity to capitalize on Moscow’s discontent with the West was apparent in Raisi’s speech to the Russian Duma in January, which devoted significant attention to condemning NATO “aggression.” Official statements and state-linked media outlets have been largely sympathetic to the Russian side, a notable shift from internal divisions within Iran surrounding Georgia in 2008 and Ukraine in 2014.

Iranian state-led news outlets have also adopted a pro-Russia tone in their coverage of Russia’s military campaign in Ukraine. An Iranian government spokesman tweeted on February 25 that “security concerns over the intensifying and provocative expansion of NATO to the east is understandable to all independent nations that are opposed to US hegemony.” During a sermon on March 1, Iran’s Supreme Leader Ayatollah Ali Khamenei described Ukraine as “a victim of the crises concocted by the United States,” which shows that “states which depend on the support of the US and Western powers need to know they cannot trust such countries.”

Like Khamenei, many Iranian observers have viewed the crisis through the lens of Iran’s foreign policy, drawing lessons from the Ukraine crisis in terms of the limits of cooperation with the West and the threat of NATO expansion. The IRGC-linked Fars NewsAgency claimed that Putin responded to Ukraine’s aggression, while articles in Hamshahri and Kayhan have portrayed the intervention as an indication of the West’s decline. Etemad, stressing Russian interests in its sphere of influence, suggested that Iran could elicit concessions in Vienna talks on reviving the JCPOA and benefit from rising oil prices due to the war.

Some reformist publications have been more sympathetic to Ukraine, comparing Putin to a Tsar and invoking Iran’s historical experience with Russian imperialism when Moscow engaged in wars of territorial conquest in the Caucasus and imposed a series of capitulations under Iran’s Qajar dynasty.

The Iranian official narrative has diverged from the reactions to intervention by Iranians on social media and on the streets. Following Russia’s military campaign into Ukraine, protestors in Tehran mobilized in front of the Ukrainian Embassy chanting, “Death to Putin.” For its part, Moscow has aimed to also influence the Iranian portrayal of Ukraine with the Russian Embassy in Iran, tweeting—and then deleting—a correction to a Tasnim article on “fake” reports about Russian fighter jets in Ukraine.

The imposition of sanctions on Russia provides an additional bonding area for Moscow and Tehran. US and EU sanctions that target Russia’s Central Bank and certain Russian banks using SWIFT draw striking comparisons to Iran’s experience under sanctions. Even prior to the current round of sanctions, Russia and Iran sought to explore ways of decreasing their dependence on the US dollar and US-dominated financial systems by trading in their national currencies and using alternative financial messaging services. Still, progress has been modest due to incompatible import-export structures, bureaucratic delays, and limited ties between their business communities. The recent sanctioning of Russia may provide the impetus for Moscow and Tehran to pursue more cooperation on their de-dollarization ambitions.

Russia’s international isolation and acrimonious relations with the West offer Tehran and Moscow further incentives to strengthen relations as both face strategic loneliness in the international arena. Short of full recognition of Russia’s territorial claims in Ukraine, Iran will likely remain one of the few states willing to outwardly support Moscow’s narrative and political justifications for invading its neighbor.

Nicole Grajewski is a research fellow with the International Security Program at Harvard’s Belfer Center for Science and International Affairs and a doctoral candidate the University of Oxford. Her research specializes in Russian and Iranian approaches to international order. Follow her on Twitter: @NicoleGrajewski. 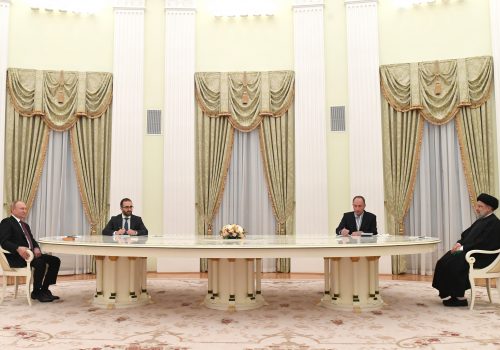 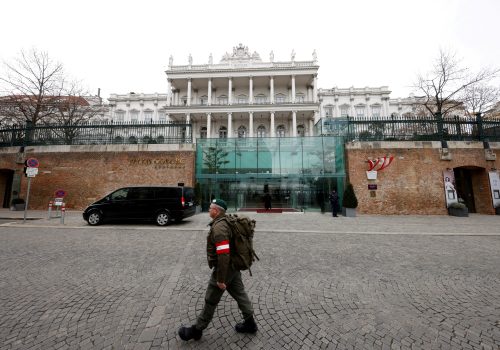