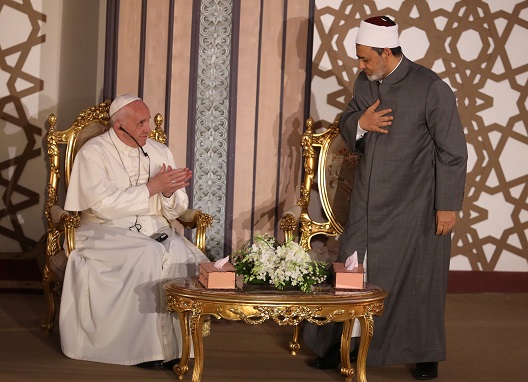 Last month, the Sheikh of al-Azhar, Dr Ahmed al-Tayeb, visited the German capital Berlin to attend the Protestant Church’s celebration marking five centuries since the start of the reformation. During his visit he met Germany’s president and a number of other ministers. This came after the visit of Pope Francis II to Egypt, on the invitation of the country’s top Imam, to attend a global conference on peace held at al-Azhar from April 27-28. These high-level political meetings have once again sparked debate over demands for al-Azhar to play a greater role on the world stage to counter the growth of global terrorism. This in turn raises questions about al-Azhar’s growing role and how effective and successful it can be.

With the rise of the Islamic State (ISIS, ISL, or Daesh) and growing waves of refugees and irregular migrants towards Europe, intensifying conflict between Sunnis and Shias and ever more frequent terrorist attacks in the West, many are banking on al-Azhar to play a role as a religious partner of the West to help the political, social, security and cultural crises facing Muslim peoples and minorities and to tackle terrorism. This is especially true as al-Azhar is not affiliated with a controversial expansionist political program. Rather, it represents the world’s top Islamic reference point which can, from the West’s perspective, be relied on to support moderation and overcome sectarian divisions.

Europe’s view of al-Azhar has been reflected on several occasions, with senior European political and diplomatic figures hosting the institution’s top cleric. Al-Tayeb has been invited to give speeches in Britain’s House of Lords and Germany’s Bundestag, received at the Elysee Palace by the French president, welcomed by a media campaign and even described on the cover of one French magazine as “the man with the keys to true Islam.” German Chancellor Angela Merkel also visited al-Tayeb at his headquarters in al-Azhar and announced that she would cooperate with him to fight terrorism. Al-Tayeb also hosted the president of France’s Senate. These visits were seen as deepening cooperation in these areas, showing that al-Azhar has started winning new influence at the expense of other Islamic institutions.

This is also true on the global stage. When the United Nations Security Council held a session to discuss efforts to tackle terrorism, al-Azhar was the only Islamic institution invited to take part, represented by Dr Muhieddin Afifi, the head of the High Council on Islamic Affairs. It has also cooperated increasingly with UNESCO and UNICEF to promote tolerance, tackle violence and terrorism, fight Islamophobia and work on women’s and children’s issues. Al-Azhar has also for the first time inaugurated cooperation with the Vatican. The rapprochement between the two has been clear in al-Tayeb’s visit to the Holy See and Pope Francis’s reciprocal visit to Egypt on the invitation of al-Azhar to take part in the International Conference on Global Peace.

This western bet on a bigger role for al-Azhar fits with the institution’s vision of itself as the top Islamic authority in the world. A 2010 statement by al-Tayeb when he hosted a joint delegation of Sunni and Shiite leaders from Iraq gives a good idea of the way al-Azhar’s leadership sees the institution’s global position. When he received these invitations, he responded: “I will visit you as I am the father of both Sunnis and Shias” —something he repeated when he received Ammar al-Hakim. However, he did not carry through, despite repeated invitations by Iraqi officials and calls for al-Azhar to play a greater role in Iraq.

The university nevertheless enjoys major influence in many societies that are experiencing sectarian strife, through relations with Sunni, Shia, and Christian actors. This is reflected in the visits of top Lebanese and Iraqi officials to Egypt, including presidents, heads of government and parliament, and Iraq’s foreign minister, as well as top religious leaders from various sects. Visits to the Sheikh’s headquarters and talks with the university’s top cleric have been a key part of each visit.

In this context, al-Azhar is working to increase its role in war-torn Libya, in light of the spread of extremist groups there which contrasts with the traditionally strong role of the country’s Sufi orders. The university launched a project to promote moderation in Libya. It also places importance on increasing its role in Africa, particularly in regions of the continent’s east and west that are experiencing growing jihadist movements. Most prominently, al-Azhar’s Sheikh used Nigeria as a platform to address Muslims across the continent and around the world.

The university’s most notable political achievement was in the Central African Republic during its civil war that pitted Muslims against Christians. Al-Azhar played a political role, mediating between the warring parties, as well as distributing aid to both Christians and Muslims. Several Christian and Muslim religious leaders responded by nominating al-Tayeb for the Nobel Peace Prize in recognition of his role promoting national reconciliation.

Al-Azhar’s growing role abroad faces many factors that undermine it and could prevent it succeeding. First and foremost are difficulties posed by complex regional conflicts and support they breed for extremism, terrorism, and sectarianism. But there are also difficulties related to the actions of other players, domestically, regionally and internationally.

Domestically, uneasy relations between al-Azhar and the Egyptian regime are among the most prominent such factors. The regime is trying to weaken the institution’s independence and bring it under its control. Key moves of late include a recent suggestion by MP Mohammad Abu Hamid to change laws on the university’s organization and attempts by the media to promote the idea that al-Azhar is responsible for spreading extremist thought and causing a rise in terrorist attacks.

Externally, there are potential challenges by certain actors, not least from states that have competing Islamic institutions, particularly Saudi Arabia which follows the Salafist-Wahhabist school of thought which according to al-Azhar diverges doctrinally from Sunni Islam. This was the focal point of a dispute between al-Azhar and Saudi Arabia after al-Tayeb’s statement to a Chechnya conference of Sunni scholars in August 2016.

The policies of US President Donald Trump could also be a driver of conflict between Saudi Arabia and al-Azhar. Unlike the Obama administration, European actors, and international organizations, Trump’s discourse shows little concern for policies that support moderate trends in Muslim societies. On the contrary, he sees Islam generally as an extremist religion. On top of that, his first overseas visit was to Saudi Arabia, home to the most closed-minded version of Islam, possibly giving Saudi Arabia greater clout as the representative of Sunni Muslims. This trend is particularly dangerous in light of Trump’s perceived efforts to build a Sunni-Israeli coalition against Iran, which could stir up further sectarian conflict and undermine al-Azhar’s role as an authority able to rein in sectarian strife.

There is also the role of the United Arab Emirates (UAE), which shares much with the Egyptian regime in its view of al-Azhar. While the university holds onto its independence, it has worked to support and promote an Azhar-affiliated Sufi school that backs the Sisi regime, led by prominent clerics Ali Jumaa and Usama al-Azhari, among others. It has also set up “Sawab” centers to respond to extremist thinking, an extension of “Marsad al-Azhar,” an electronic publication in nine languages which monitors content published by extremists and provides responses. However, there is only so much the UAE can do in this regard, given that it is also trying to use al-Azhar’s influence in several ways both by setting up “the Council of Wise Muslims” headed by the university’s top cleric in order to promote peace in Muslim societies, and by establishing a branch of the university in the UAE. Furthermore, the UAE is traditionally opposed to the closed form of Islam promoted by Saudi Arabia.

In summary, given the waves of terrorism that have struck many areas of the world, it appears that the West is betting on al-Azhar playing a moderate role and challenging the extremist ideology adopted by terrorist groups such as Daesh and undermining their religious legitimacy to prevent them attracting more recruits. But this demand for al-Azhar to play a bigger role faces challenges linked to the complexity of the issues it is called to deal with, along with the fact that many actors’ reject the idea of al-Azhar playing such a role.