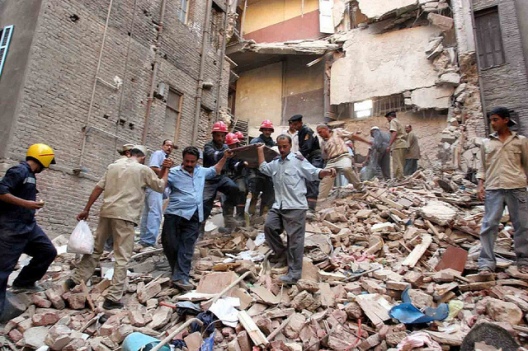 Photo: At least five people were killed when a Cairo building collapsed in August 2006 (Nasser Nouri)

As Egypt’s political failure continues to permeate various sectors—the economy, health system and security—decades of poor management and little accountability have led to the failing of a key sector: Egypt’s real estate market. The recent spate of collapsing buildings reveals an infrastructure that is literally shaking at its core.

The collapse of buildings across Egypt is a problematic phenomenon on several fronts. Most obviously, it endangers the lives, properties and homes, and well-being of the Egyptian public. The devastation of losing one’s home, not to mention the loss of human life alone, should translate into the implementation of building regulations and a more strict and urgent move towards construction reform. As laid out in Article 46 of the country’s new constitution, all Egyptians have a right to “live in a healthy, sound and balanced environment,” with protection of this right being a “national duty.” The overarching failure to enforce building laws and regulations, and to enforce maintenance ordinances directly endangers civilians lives and property, two fundamental rights set forth in Articles 2 and 3 of the Universal Declaration of Human Rights that state: “everyone has the right to life, liberty and security of person.”

While regulations and laws may exist, the collapse of these buildings is clear indication that regulations are not being enforced. When asked by television host, Youssef al-Husseiny on private satellite channel ONTV, about the collapse of the building in Nasr City, the municipality’s head Ali Salem explained that a restoration order was sent to the owner of the building, calling for immediate action. When asked why the municipality did nothing over a period of four and a half months to follow up on the order, Salem stumbled over his words, initially stating that he was unaware of whose responsibility it was to monitor the status of buildings, consequently attempting to place the blame on the police for not enforcing the order, and later becoming defensive and suggesting that he would stop working in the face of criticism. He ended the conversation abruptly, refusing to engage on his office’s responsibility for the collapse.


(Scroll to 2:22 for the beginning of the conversation)

This phenomenon also represents an economic and financial loss for individuals, the municipality, city, and country. Litigation, rebuilding, compensation, and wealth distribution all significantly add up, creating burdens that at least one party, whether the federal government, municipality, contractor, or displaced family, will have to endure; in most cases, it is the poorer families that walk away, homeless and unprotected.

On March 30, Mada Masrquoted state media as saying that the collapse of a Cairo building occurred because “it was old and not constructed on concrete columns.” Before the revolution, and even more so in its wake, buildings across Egypt have sprouted without proper licenses in order to avoid state bureaucracy, cut costs affiliated with implementing regulations, and gain as much profit as possible from each construction project. In January 2013, engineers reported that approximately twenty buildings were collapsing on a yearly basis in Alexandria alone.

Correcting the housing problem would be costly and time consuming, explaining why few have attempted to tackle this endeavor, particularly at a time when successive governments have been able to do little on key fronts involving Egypt’s failing economy. On February 3, 2011, the Wall Street Journal wrote that “ more than 90 percent of Egyptians hold their property without legal title,” while a blog for the Property and Environment Research Center estimates that the value of “extralegal businesses and property, rural and urban” adds up to $248 billion. Necessary reform would entail the standardization of building regulations and their unified codification, as well as regular inspections of currently existing buildings and those yet to be built. Police and regulating officials, instead of taking bribes, would have to be willing to report illegal construction to the appropriate authorities; court dockets would be full of injunction and compensation requests which judges would need to be open to hearing; and families that live in faulty or old buildings would need to be evacuated and given temporary residences until construction is completed. The task is gargantuan and requires the collaboration and cooperation of actors across a number of sectors, as well as a willingness by the country’s leadership to challenge what has become institutionalized bureaucracy and corruption. Until this cadre of leadership appears however, we will continue to witness building collapses on a regular basis across Egypt.