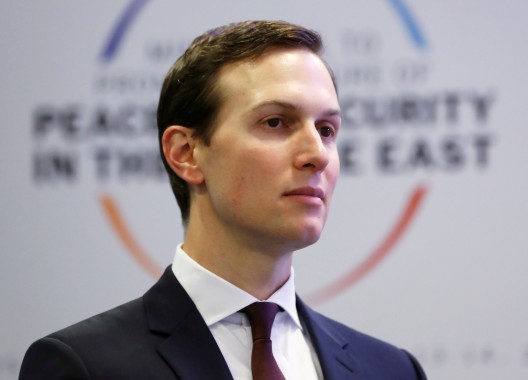 Jared Kushner, senior adviser to the US President Donald Trump, is on his way to six countries in the Gulf states to discuss and present part of his long awaited Israel-Palestine peace process plan in private meetings with foreign diplomats. He is expected to visit Oman, Bahrain, Saudi Arabia, Qatar, United Arab Emirates, and Turkey over the next few days. While the plan is still held tightly secret, experts are speculating on the selection of countries Kushner is to visit and what that implies for the plan. Below are Atlantic Council’s Middle East experts analysis on the implications of this visit and what it means for the later unveiling in April this year.

Shalom Lipner is a nonresident senior fellow in the Atlantic Council’s Middle East Program. Follow him on Twitter: @ShalomLipner.

The rollout of the White House’s long-anticipated plan for Middle East peace continues this weekend with Jared Kushner’s return to the region. Prevailing conditions are not overly conducive to a breakthrough though.

Kushner, if Trump administration sources are to be believed, intends to limit his discussions with Gulf leaders to the economic dimensions of the proposed deal. His hosts can be expected to demonstrate little interest in contributing to the initiative until Kushner reveals his political cards as well.

In fact, the horizon for progress toward an “ultimate deal” continues to grow ever more distant. Not only will the Sunni monarchies be withholding judgment on Kushner’s ideas, but the central protagonists—Israelis and Palestinians—couldn’t appear less focused on reconciliation than they do today.

Israelis are invested fully in the spirited campaign leading up to their national elections on April 9. Peace with Israel’s Palestinian neighbors has proven to be a virtual non-issue for voters, with the candidates engaged in a debate more about personalities than issues.

Chaos continues to reign on the Palestinian side. Representatives of various Palestinian factions who attended a meeting earlier this month in Moscow, where they had hoped to iron out their differences, could not even achieve consensus on a final communique. This only reinforces Israeli claims of lacking a credible Palestinian partner for dialogue.

Under these circumstances, the status quo is most likely to remain in force. The Israeli government will seek to “humor” US President Donald Trump, publicly embracing his efforts to achieve peace without rushing to offer tangible concessions. Israel will bank on the Palestinians to reject US overtures in its stead. And the Palestinians—whose angry contacts with US officials are confined these days mostly, and remarkably, to social media—will almost certainly do just that.

At the same time, shared interests have generated new heights of convergence between Israel and the Gulf nations, as was on evidence at the recent international conference in Warsaw. Regional cooperation that the US has struggled to engineer through diplomacy is now taking shape, ironically, in response to fears over the demise of Pax Americana.

The genesis of the Israeli-Palestinian conflict is not economic. It is about the internationally recognized right of the Palestinians to have a sovereign state and solving the dispute according to the relevant UN resolutions. The economic crisis of the Palestinians did not cause the conflict, but one of its byproducts. By merely dangling economic incentives for the Palestinians, Mr. Kushner is placing the cart before the horse. Furthermore, deal-making among external parties to determine what is good for an occupied population is a colonialist method that proved its failure in the 20th century. The US is not a colonial power and does not know how to act like one. Therefore, any credible peace effort must put the Palestinians and the Israelis at the negotiating table and apply equal pressure on both sides, not to work with third party states who are mainly included for their potential role to pay the financial bill of yet another still-born deal.

Dr. Nabeel Khoury is a nonresident senior fellow at the Atlantic Council’s Rafik Hariri Center for the Middle East. A retired foreign service officer, Dr. Khoury has served as a spokesman for the Department of State in Iraq in 2003 and as Deputy Chief of Mission in Yemen, 2004-2007. Between 2008-2012, he was the director of the Near East South Asia office of the Bureau of Intelligence and Research (INR).

Lack of transparency in Kushner’s planning leaves one to speculate and theorize that an economic element is the dominant feature of Kushner’s peace plan. The focus on Gulf states in Kushner’s upcoming visit lends credence to this thesis. It is not hard to imagine that Gulf states, which have already indicated willingness to normalize relations with Israel, might be willing to provide the funds to oil a deal via some joint Arab-Israeli projects which accelerate the normalization and incidentally offer some material benefits to Palestinians. Accusations that the Trump administration has been rife with conflict of interest deals, it is also not difficult to imagine that many will suspect that the Trump family businesses might also benefit from any proposed projects.

Palestinian aloofness from Jared’s plan—they were after all not invited to the Warsaw conference and have refused to negotiate with Kushner—and Jared’s own lack of experience in the complex history of the Middle East peace process, it is hard to find any serious analyst who thinks this plan, which has been dubbed the deal of the century—has any chance of resolving the Israeli-Palestinian conflict. Reportedly, even PM Netanyahu joked that Jared was bold to present at Warsaw the crazy idea of a peace plan.

Too many words have already been wasted on the supposed Middle East peace plan touted by Donald Trump’s 38-year-old son-in-law Jared Kushner. The plan is probably doomed to failure not just because Kushner and his ilk are hopelessly bound to the Israeli right-wing’s narrative of the conflict, and have been excluded as effective interlocutors by the Palestinians; not just because the Likud Party government of Benjamin Netanyahu has correctly read the Trump White House as one it can easily manipulate to extract maximum advantages while giving minimal if any concessions; and not just because the Trump administration has so alienated Iran and its many regional allies that they would have a great incentive to pull the rug out from any settlement. More fundamentally, any peace plan will likely fail for the same reason Trump’s border wall scheme and his plan to bring Iran to its knees have failed: because Kushner and the Trump White House utterly lack the diplomatic and institutional skillset to guide the many instruments of US government toward backing a settlement while garnering the tacit or explicit approval of the regional and global stakeholders.