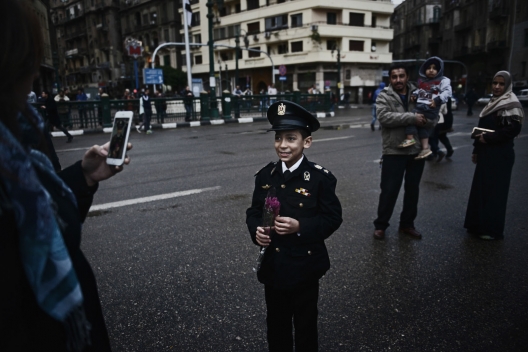 Five years ago, thousands of Egyptians took to the streets in mass protest. Their chants of “Bread, freedom, and social justice” filled Tahrir Square. The date they chose was no coincidence. January 25 marked national police day, and a key demand of the protests was an end to police brutality in Egypt. Eighteen days later, protests in Cairo’s Tahrir Square, and across the country, brought an end to the 30-year autocratic rule of Hosni Mubarak.

As the years have passed, in that same spot in downtown Cairo, the anniversary of the January 25 uprising has been a bustling world of protest and celebration. This year, it was shockingly different. In the lead up to the fifth anniversary, authorities had arrested activists, shut down cultural spaces, and conducted mass searches of flats in the downtown area. The message from the government was that any form of protest would not be tolerated.

In the late afternoon of January 25 of this year, Tahrir Square—the heart of January 25—was the scene of sporadic, minor celebration under cloudy skies and drizzle. Those who celebrated handed out flowers to the policemen—in plainclothes and in uniform—who filled the square.

They took selfies with the security forces and chanted in support of the government, amid requests by the police for them to leave. I was asked by police several times to stop taking pictures so I would not “mobilize people in front of the camera.”

One woman, undeterred by their requests, chanted against the uprising and the activists behind it.

The significance of January 25 in Egypt has continued to evolve—from national police day, to the day a revolution began. In 2016, the question remains – what does January 25 represent for Egyptians?

January 25 to some remains a day of revolution, and to others, it has reverted to a day on which to celebrate Egypt’s police force.

To the woman chanting, and others like her, who made their way to Tahrir, it is the latter.

Those who see it as a revolution were nowhere to be seen in the square.