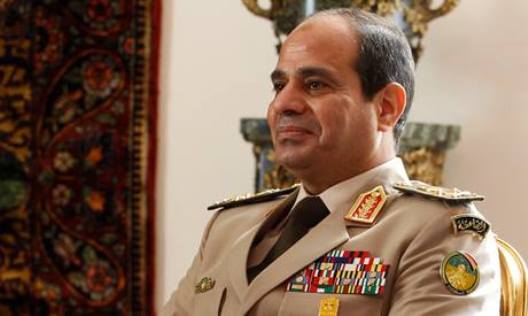 The popularity of Field Marshal Abdel Fattah al-Sisi rests more on hope that he will lead Egypt away from the brink and less on knowledge of the man himself. While many journalists and scholars have been quick to caricature him, few have tried to understand the historical forces likely to shape his role. If Sisi sees the presidency as much as a national obligation as a personal ambition, then his behavior in office will depend largely on the problems he faces. Egypt possesses an array of difficult, but not insurmountable, problems. The odds of success for the next leader are small, but not non-existent.

The Egyptian republic is in tatters, so its leader will face the stark choices common to distressed regimes. He can choose to be a reactionary and attempt to reconstruct the old regime. Alternately, he can face reality and attempt to fix problems as best he can and in the process become a transitional leader, however reluctantly. Historically, transitional leaders are a product from the very system they end up changing radically. Most transitional leaders set out to make modest reforms and minor fixes before reality and the logic of a failing system force them onto other paths.

Recent history offers many examples. Mikhail Gorbachev, a loyal Soviet man, presided over the peaceful dissolution of the Soviet Union. Deng Xiaoping was Mao Tse-tung’s faithful companion who reoriented China 180 degrees away from Maoism. F. W. de Klerk was both the mature scion of apartheid and the man who dismantled it in less than two years. Closer to home, Sa’ad Zaghlul, father of the Egyptian independence movement, started out as a protégé of the imperial Lord Cromer.

Sisi, born in 1954, is of the generation that Gamal Abdel Nasser called “Abna’ al Thawra,” or “Sons of the Revolution,” and who made him beam with delight when they addressed him as “Baba.” Sisi may quickly find that maintaining the order instituted in 1954 will mean certain failure, and that success for Egypt will demand a turning away from the regime that nourished him. The contours of failure are so clear that they warrant no further discussion, but should success not evade Sisi, it will be important to understand the potential nature of this transitional figure. Some patterns have emerged already, but other, perhaps more critical, are still a mystery.

Stylistically, Sisi is not Nasser. Egyptians are in the habit of elevating leaders to heroic status, especially in times of trouble, but Sisi retains a diffident public persona in the face of the hoopla. He has made it clear he intends to be the hard driving manager of a capable outfit, rather than a heroic leader in the manner of Saladin, the Kurdish conqueror appropriated by the Arabs. Sisi’s speech announcing the July 3 removal of Mohamed Morsi was closer to a Power Point presentation than the sonorous eloquence of Anwar al Sadat on July 23, 1952.

Sisi has fostered, or at the least, tolerated Egyptian hyper-nationalism with a marked turning away from the Arab world. Where Nasser expended Egyptian treasure to export revolution to the Arab countries, Sisi has garnered significant assistance to Egypt in order not to export the revolution to them. While there seems to be no return to Nasser’s opposition to the West’s role in the Arab world, Egyptian cooperation with the United States on regional affairs, especially the Arab-Israeli conflict, is more muted, either by choice or necessity. He speaks of “Misr, Um Al Dunya” (“Egypt, Mother of the World”) rather than promise to recreate the mythical great Arab nation. Egypt’s needs will likely accentuate that trend.

Turning hard against the Muslim Brotherhood is yet another indication of a move away from Mubarak’s policy. The Brotherhood was, in many ways, a component of the pre-2011 order. Although officially banned as a political party, it was given great latitude in social matters and its candidates tolerated, as long as they did not threaten to become a significant parliamentary force. Although the current policy superficially resembles Nasser’s attempt to suppress the Brotherhood, it is actually far harsher and seems more determined to eliminate the group as a political force. The Brotherhood has been tolerated for more than 40 of the past 60 years, but today its very existence seems at stake. Permanent suppression of the Brotherhood would be a historic event and will deeply color Sisi’s legacy.

There are other significant areas where there are hints but no clear idea of what Sisi’s policies will be. On the economic front it is difficult to believe that he can replicate Nasser’s statist policy. Egypt can no longer afford that, nor can the government nationalize resources for its use without upsetting the equity holders of these assets from the Gulf and the West. The government has already indicated it might want to alter the ruinous fuel subsidies, and leaked recordings allegedly indicate he may approve of such measures. Any major economic reform to further liberalize the economy will collide with one of Sisi’s other major quandaries; the role of the army.

From 1952 to 2011, the Egyptian army did not intervene directly in governing, although it was always the backbone of the regime. Since 1973 in particular, much of this has been accomplished by granting the army a major role in the “commanding heights of the economy.” Economic reform may alter this and as a consequence force Sisi to face the issue of what role the army will play in politics. Confronting this issue is as painful as ignoring it. How he handles it will determine the features and the stability of the upcoming regime.

Transitional figures sometimes lack a clear idea of where their journey will take them, and often others have a major say in the destination. De Klerk’s actions would have had different results without a Nelson Mandela.  Deng’s reforms would have been for naught if George H. W. Bush had not encouraged investment in China even after Tiananmen Square. Gorbachev’s path was accelerated by the restive Eastern European countries, and even some states in the Soviet Union. Similarly, the actions of Egyptians and outsiders could significantly affect the nature of a Sisi transition. These actions will determine if he is the last of his kind, or the precursor to something far more problematic.

Maged Atiya is an Egyptian-American physicist and businessman.  He blogs at   http://www.salamamoussa.com and at twitter @salamamoussa