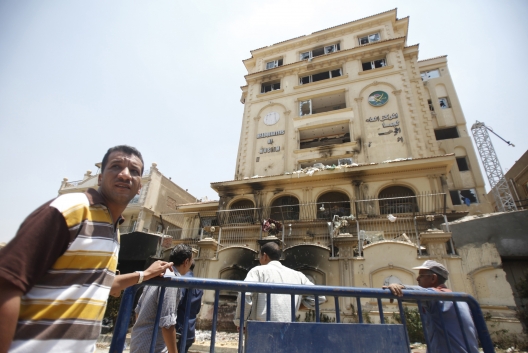 Reports on growing differences within Egypt’s largest political Islamic group have been rife since the army’s removal of former President, and Muslim Brotherhood leader, Mohamed Morsi in 2013. Divisions over the Brotherhood’s strategy in fighting what they call a “military coup,” and the level of violence that should be involved, have become increasingly public. This split has been spurred by struggles between members in Egypt and those abroad, as well as by what appears to be a generational gap in approaches.

Immediately after Morsi’s ouster, much of the Brotherhood’s higher echelons were in prison, including the group’s top leader, Supreme Guide, Mohamed Badie, and his deputy Khairat al-Shater. Other high ranking members had fled the country to Qatar or Turkey. Badie’s deputy, Mahmoud Ezzat, who is also no longer in Egypt, was named the de-facto leader of the group in August 2013. Together with Mahmoud Hussein, the group’s Secretary-General based in Turkey, and two deputies in London and Turkey, they have attempted to lead the organization from afar.

Under local pressure to elect leaders on the ground, the Muslim Brotherhood announced in February 2014 the results of an internal election for interim leadership to manage its daily affairs in Egypt. This ‘Supreme Administrative Committee,’ as it’s called, is reportedly led by Mohamed Kamal, a member of the Brotherhood’s Guidance Bureau, the group’s highest decision-making body. Since its formation, the committee has pushed to become the Brotherhood’s actual decision-making body. They argue that members in Egypt confronted security forces, facing either death or arrest, and that the ‘old guard,’ is responsible for the group’s failures.

In January 2015, the Egypt-based Administrative Committee announced the appointment of a new spokesman, Mohamed Monstasser. He quickly revealed this was not his real name, a measure taken to avoid arrest. In a recent interview with Al Jazeera, he revealed that the Brotherhood’s Secretary-General, coincidentally named Abdel Fattah al-Sisi, who appointed in February 2014, was among several members killed in a police raid on an October 6 apartment in July 2015. The leadership in Egypt, he said, elected a new Secretary General, whom he refused to name, also for security reasons.

Hussein himself continued to keep a relatively low profile, until he appeared on the Qatari-owned satellite channel, Al-Jazeera, on December 12 insisting that he remained the elected Secretary General of the group. He said that holding elections in the existing climate was impossible, entitling the current leadership to remain in place. On the same day, an official Brotherhood statement was issued from London announcing the appointment of a new spokesman, Talaat Fahmy, and the dismissal of Montasser. The statement claimed that Montasser violated internal regulations and delivered statements to the media without authorization from the leadership. Two days later, Montasser took part in the telephone interview on Al Jazeera, alongside Fahmy. In it, he said elections for a new Guidance Bureau and Shura Council should have taken place at least a year ago. Based on the Brotherhood’s internal bylaws, elections should take place every four years, with the current leadership elected in 2009.

The struggle for authority has also played out on the Brotherhood’s online presence. The London-based Brotherhood office said that a new website, IkhwanSite, would be launched, on which the group’s official statements would be released. The original website, IkhwanOnline, founded in 2003, however, declared loyalty to the Administrative Committee, refusing to publish the statement announcing Montasser’s removal. The Administrative Committee also released a separate statement on December 15, insisting that Montasser remained the spokesman, and that the leaders abroad—whether the acting Supreme Guide or Secretary General—did not have the authority to make any decisions without referring to the leadership in Egypt. By December 27, however, IkhwanOnline was no longer operational. According to independent news site Al Masreyoon, the younger ranks within the Brotherhood blamed Ezzat and the old guard for taking it down.

Following the statement announcing Montasser’s dismissal, Amr Farag, a young Brotherhood activist and Rassd co-founder, wrote a bitter Facebook post accusing the old leadership of betraying the many sacrifices offered by the group’s youth in Egypt since Morsi’s removal. “Mahmoud Ezzat’s group fired today some of the Brotherhood’s best youth who offered their lives for the cause, only because they differed with Ezzat and Mahmoud Hussein,” he wrote. They were fired, he said because, “They insisted that the group should be run in an institutional manner based on elections, because they refused to allow those responsible for the downfall of Morsi, and the massacres of Raba’a, and the Presidential Guard to control their destiny, and because they recognized that whatever was taken by force, cannot be restored except by force.”

Separate statements were also issued by at least 11 branches in different governorates, including Cairo, Alexandria, and Beni Suef, rejecting these decisions, and declaring their loyalty to the Administrative Committee in Egypt. A statement by the Beni Suef branch echoed sentiments expressed by the group’s younger members on social media. “The Muslim Brotherhood in Beni Suef, renew their allegiance to God and to the Brotherhood’s Supreme Administrative Committee inside Egypt, and confirm that we remain committed to Jihad and resistance until the January 25 Revolution fulfills all its goals,” it read. However, the remaining 17 branches in the rest of Egypt’s 27 governorates either issued counter statements confirming loyalty to the acting Supreme Guide, Ezzat, or remained silent.

The Dangers of Disintegration

In its eight-decade history, dating back to 1928, the Brotherhood has faced many bloody confrontations with the Egyptian authorities. The group, however, never collapsed, and in fact, made a strong comeback in the mid-1970s when the late President Anwar Sadat released their top leaders from prison.

Hassan Nafaa, a political science professor at Cairo University, warned of the consequences of allowing the Brotherhood to disintegrate. He believes that the bloody confrontation between security agencies and Brotherhood members since Morsi’s removal had led to the radicalization of more young members, and the justification of violence against the regime. “The alternative to the Brotherhood members who are angry at the old, conservative leadership of the group is the Islamic State (ISIS or ISIL) in Syria and Iraq,” he told EgyptSource. A report published by daily Al-Shorouk in late December claimed that more Brotherhood members are traveling to Syria to join the war against Syrian President Bashar al-Assad under the banner of ISIS. The report could not be independently verified.

Ahmed Ban, a former Brotherhood member and an expert on political Islamic groups, believes the current exchange of accusations between different wings within the Brotherhood is linked to the upcoming anniversary of the January 25 Revolution. “Many youths in the group believe they need to escalate the confrontation with the regime and find it legitimate to use violence,” Ban told EgyptSource. “The old guard is, of course, more cautious, and are worried about the consequences of increasing the use of violence against the state,” he added. Some experts, among them Hisham al-Naggar, a researcher on Islamist movements, expect this split will bring about the eventual collapse of the group.

However, Azzam al-Tamimi, a London-based Islamist known for his close contacts with the Brotherhood, downplayed the obvious rift. He noted that the Brotherhood was a huge organization with many branches all over the world and that even if a few hundred or more of its members decided to resign, it would not weaken the larger group. “The Brotherhood is there to stay, and has gone through worse times throughout its history,” he wrote in an article published on several websites close to the group.

Meanwhile, 44 former parliament members who belonged to the Brotherhood’s Freedom and Justice Party released a statement on December 22 announcing a mediation initiative aimed at restoring the group’s unity. Led by Gamal Heshmat, the MPs said new elections should be held soon to choose a new Guidance Bureau and Shura Council, and that all sides should cease discussing the group’s affairs in public. However, it is unlikely that this initiative will bring an end to the existing differences within the group. Instead, all sides await the upcoming anniversary of the January 25 Revolution to assess the credibility of threats by young Brotherhood members to escalate their confrontations against the regime.