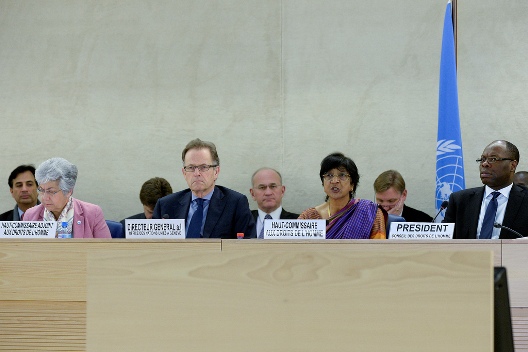 In a setback to Egypt’s efforts to convince the international community that it is moving toward democracy, twenty-seven countries delivered an unprecedented joint statement on Egypt at the United Nations Human Rights Council (HRC) in Geneva on March 7.  This is the first time that so many countries—the United States, the European Union “big three” member states of France, Germany, and the United Kingdom, twenty-one other European nations, Japan, and Turkey—banded together to criticize Egypt in a HRC debate.

Considering how bad the human rights situation in Egypt has become, the rebuke is gently phrased indeed.  Like many such statements made in the HRC, it has no binding authority.  But when viewed in the context of the struggle over Egypt’s global reputation, and on the eve of Defense Minister Abdel Fattah al-Sisi’s anticipated presidential run, the statement stands out as a high-profile, multilateral registering of concern about Egypt’s political trajectory.

The statement touches on many of the major human rights problems in Egypt today.  As would be expected in a consensus document forged by many governments with various economic and security interests in Egypt, however, it does so in a relatively mild and indirect manner.

The statement briefly expresses concern about the escalating violence by “all sides” and “strongly condemns the reprehensible terrorist attacks in Sinai and elsewhere.”  (Notably, the document carefully avoids such strong language when describing human rights abuses by the Egyptian government.)  It goes on to express “concerns” about restrictions on fundamental human rights and the security forces’ disproportionate use of lethal force against demonstrators, reminding the authorities to operate in accordance with Egypt’s international human rights obligations, even when faced with persistent security challenges.  The statement calls for accountability for those killed since last July, estimated by human rights groups to exceed 1,400 citizens.  It points to the “important and legitimate role” of human rights defenders and civil society, and calls for an end to harassment and arrests of those “exercising their rights,” including journalists.  It commends the new constitution for enshrining fundamental freedoms, but calls for the implementing legislation to adhere to Egypt’s international commitments and to “ensure full civilian control over all branches of government.” The signatories assert that “a prosperous and stable Egypt can only be secured based on an inclusive political dialogue and a democratic solution.”

The statement does not mention the repressive new protest law and other restrictions on rights during the recent constitutional referendum.  Nor does it refer openly to the arrest since last July of as many as 20,000 Egyptians (most of whom, according to human rights groups, are still being held in overcrowded conditions, subject to torture and other abuse, and without due process), or to the trials of Muslim Brotherhood members, non-Islamist activists, and journalists. Most important, it does not point directly to the main cause of the deteriorating rights situation:  a state dominated by military and security institutions with vast, unchecked powers.

Even so, the joint statement must have stung the Egyptian Foreign Ministry, known for strenuous,  often effective diplomacy (described by one observer as “fighting tooth and nail”) to deflect criticism of its human rights record at the UN.  At the Council session, Egypt lambasted the “false-driven message” and rejected “any sort of international intervention” in Egypt’s internal affairs.  It admonished the signatories to “consider the credibility of their own positions when they claim to be promoting rights.”  It complained that the statement failed to take into account the full threat of terrorism faced by Egypt or to credit “the magnitude of the transformation process… in a big country like Egypt which is on its way towards building a democratic system.”  The Egyptian delegation cannot help but have noticed that on March 5, a special panel was held on the sidelines of the HRC session to applaud the democratic progress of its small Arab uprising neighbor, Tunisia.

The negative spotlight on Egypt in Geneva comes on the heels of recent criticism by the US Department of State and by the EU’s Foreign Affairs Council.  It contrasts sharply with the silence on Egypt at the last UN HRC session, in September.  At that time, no country was willing to push for a joint statement condemning the military’s removal of an elected president or the deaths of hundreds of Egyptians during the violent dispersal of pro-Mohamed Morsi sit-ins.

Primarily this was because the Syria chemical weapons issue dominated the agenda.  But many countries also seemed paralyzed about how to refer publicly to the July coup or how to speak up on behalf of the rights of Islamists when so many Egyptians were cheering on the repression; many seemed willing to accept Egypt’s promises to restore democracy quickly.

This time, several European countries including the Netherlands, Sweden, Switzerland, and Germany took the lead on a draft document.  The United States quickly agreed to sign on and worked hard in Geneva to attract more signatories. To underscore Washington’s support for the statement, the State Department spokesperson, Jen Psaki, took the unusual step of highlighting it at the top of her daily press briefing on March 7.

The recent greater willingness of many Western countries to criticize Egypt publicly for its democratic backsliding reflects frustration at the intensifying repression that now targets not only the Muslim Brotherhood but also non-Islamist activists critical of the government, journalists covering the unrest, foreigners caught up in the dragnet, and ordinary Egyptians.  As one European recently remarked, “Europe is not that comfortable defending Islamists and frankly is relieved to see Morsi gone; we are more comfortable defending non-Islamist activists.”

Yet, the fact that more countries did not join even a fairly soft statement reflects Egypt’s continuing geopolitical significance and its influence within the UN system.  Australia and Canada, two of whose citizens are imprisoned and on trial for terrorism charges for working for Al Jazeera, were not signatories. Southern European states such as Italy, Spain, and Greece, which tend to prioritize illegal migration control and economics ahead of human rights in nearby Arab countries, were absent.  No Latin American, African or Asian countries (other than Japan) signed on, as many tend to side with Egypt, still viewed as a leader of the non-aligned nations; it would be unimaginable for Arab governments to criticize Egypt in the HRC.

Nor should the joint statement be read as a signal that the United States and important EU member countries are planning to distance themselves from Egypt.  Conversations during a recent trip to Europe indicated that, although the EU and important member states are, to varying degrees, disturbed by the human rights situation, they are willing to work with (though not quite embrace) the new security-dominated political order for now.  They don’t see another policy option because they view Egypt as too important to treat more harshly and because they doubt the extent of their leverage were they to take more material punitive steps.  Instead, they seem to be hoping that, as one European official put it, taking a stance of “criticism, yes, but while keeping the door open” might prod the Egyptian authorities to change course.

In Washington, there is a complicated mixture of genuine frustration about the human rights situation, doubts about whether US pressure matters, congressional and defense community pressure to resume business-as-usual with military aid, cynicism about the near term possibility of democratization in Egypt, and exhausted resignation to the current political situation. In this morass, the US administration may take the path of least resistance and try to reduce tensions with Cairo (and with Israel and Gulf states unhappy with President Barack Obama’s Egypt policy) and to demonstrate support for Egypt’s counterinsurgency campaign in the Sinai.  It may seek to release some of the military aid suspended last fall and to engage constructively (though not necessarily enthusiastically) with Egypt’s new leadership.

Hinting at such an approach, Obama broke his four-month long public silence on Egypt at a March 3 press conference with Israeli Prime Minister Benjamin Netanyahu, stating that he sees an “opportunity” to “move beyond recent events over the last several years to a point in which once again there is a legitimate path towards political transition” (one assumes he means the new constitution and al-Sisi’s anticipated election as president).  Echoing this apparent desire to move forward, Benjamin Rhodes, one of Obama’s closest foreign policy aides, said at the Carnegie Endowment on March 5, “In terms of where we are with this government… Do we need to remain engaged to a certain extent such that we can keep making the argument, keep pressing the case? … We believe it was better to remain invested in a relationship with the government and people of Egypt, than to essentially say, that relationship is going to come to an end because of events that transpired.”

Thus the March 7 joint HRC statement, groundbreaking as it was in the context of UN diplomacy, appears to reflect an emerging US and European approach of “constructive engagement” with a newly authoritarian Egypt.  They will raise some human rights issues, with the hope of nudging Egypt toward better behavior, but will not fundamentally question the new political order.

Amy Hawthorne is a resident senior fellow with the Atlantic Council’s Rafik Hariri Center for the Middle East.