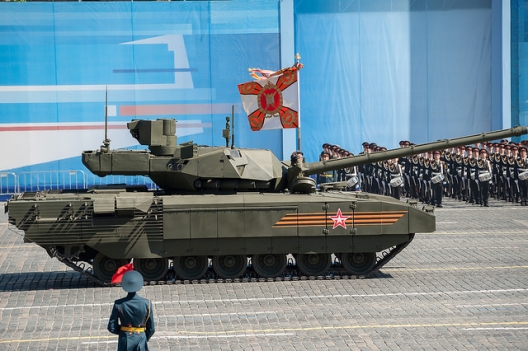 With Moscow’s Victory Day parade quickly approaching, there has been significant coverage on the newest addition to the Russian family tree of armored vehicles, the T-14 Armata. Purported by media to be a super tank, the credibility of the T-14 is now being seriously questioned due to the Armata that broke down during the rehearsal for the parade. The West should not be distracted by the Armata’s recent public relations disaster. Instead, it is important to examine how this new tank reveals key changes in Russian military doctrine. The Armata represents Russia’s dedication to developing a professional army capable of fighting in large scale and low-intensity regional conflicts.

The Armata is a direct product of an effort by the Russian Federation to professionalize its armed forces. This shift in doctrine developed after Russia’s wars in Chechnya revealed dramatic deficiencies in its military’s ability to fight low-intensity wars. The Russian army was pushed back by a stateless enemy, weak in numbers, weapons, and supplies. From December 1994 to August 1996, the Russian army took just over 60,000 casualties: 5,500 killed, 52,000 wounded, and 3,000 missing. Russia’s ill-trained conscript army, conventional Cold War tactics, and poor equipment produced catastrophes: in the battle of Grozny 1994, nearly 70% of the 200 Russian tanks involved were destroyed. After their poor showing, Russia has sought to revamp its armed forces with a new doctrine emphasizing professionalism and incorporating modern equipment.

The design of a new tank is crucial to the efficacy of a Russian professional army, which is increasingly prioritizing the survivability of its personnel. Survivability for a professional army means assuring more trained soldiers are able to fight another day. Russia’s newest iterations of its aging tank designs, the T-90 and T-72B3, employ upgraded survivability capabilities, notably explosive reactive armor. However, at their core, they retain characteristics that make them more suitable for a conscript army and mass armored warfare. The older tanks are less suitable for a professional army, particularly in low-intensity conflicts.

Unlike the T-90 and T-72B3, the Armata’s design and capabilities mirror the threats it is intended to face. The Armata incorporates modern principles of survivability, such as being built around a fully automated turret, sealed away from the crew, which reduces the danger posed by the detonation of ammunition. Like its Western counterparts, the Armata is a high-profile tank, relying on heavy layers of composite and reactive armor. This is unlike the T-90 and T72B3, which relied on a low profile for slower hit probability. Anti-missile countermeasures, are also integral to the Armata’s design.

Western tank designs, built upon similar principles, have demonstrated significant crew survivability against insurgency tactics in low-intensity conflicts. The Israeli Merkava, the Armata’s direct inspiration, is particularly exemplary of Western tank design and has boasted exceptional performance against asymmetric threats. It features a high profile and composite armor, built from the ground up prioritizing crew survivability, much like the M1 Abrams, Leopard 2, and other modern Western designs. The Merkava also incorporates unique features into its doctrinal interpretation: a forward-located engine provides additional crew protection, and anti-missile countermeasures similar to those the Armata design features prominently. Lebanon 2006 would prove the value of this Western doctrine and Israel’s own design against insurgency threats. The Israeli Defense force experienced many setbacks, exemplified by the Russian military in the First Chechen War: armor was deployed conventionally and crews were primarily conscripts. However, casualties were significantly mitigated, due in large part to the Merkava’s design emphasis on crew survivability. The 401st Armored Corps Brigade, the IDF’s spearhead force in the operation, reported only eighteen tanks severely damaged, two completely destroyed by heavy IEDs, and twelve soldiers killed.

Production of the Armata also reveals Russia’s regional foreign policy objectives. While many are terrified of Russian allusions to the use of nuclear weapons, Russia’s most recent military doctrine implies the developed use of conventional forces. Russia’s nuclear strategic forces may ensure its territorial sovereignty, but their usefulness for regional power projection is limited. Russia is most interested in reasserting control in its historic borderlands, what they call the Near Abroad. As such, the Russian military appears to be preparing for multiple hybrid war scenarios. Toward this purpose, there is the need for soldiers trained in irregular warfare and for mobile armor capable of addressing a variety of threats. Whether a hybrid invasion like in Ukraine, open warfare with a neighbor, or low-level terrorism threats in the Caucasus, the Armata would be extremely useful for the Russian military. To date, the T-90 is already more than enough to deal with most armor threats in the conflict in Ukraine. The Armata would be even more formidable. It would not be unheard of for the Kremlin to use its now-experienced forces in other regions, such as the Baltic States or Transnistria in Moldova. The threat of experienced and robust Russian conventional forces is a worrying prospect for Russia’s neighbors.

Many specifics on the Armata remain unknown. While on paper the Armata is a wonder tank, its actual capabilities are still untested. Due to the Kremlin’s systematic disinformation and misdirection campaign, the Russian government’s true intentions are difficult to discern from its official announcements and policies. The focus on innovative weapons systems like the Armata, which emphasize quality over quantity, show that Russia is serious about modernizing its military and projecting into the Near Abroad.