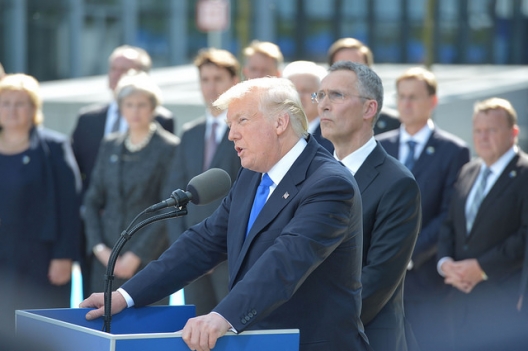 It was a simple sentence. Just 27 words.

“We face many threats, but I stand here before you with a clear message: the U.S. commitment to the NATO alliance and to Article 5 is unwavering.”

This was what President Donald Trump was supposed to say in his May 25 address to NATO leaders in Brussels as a way of reassuring them about his evolving views toward the European collective-security pact that he once dismissed as “obsolete.” A senior administration source today provided me the language from the deleted sentence, which was part of the final version of the speech signed off on by the Pentagon on May 23; the National Security Council and State Department approved similar language.

But Trump, as I reported Monday, did not say it.

Instead, the sentence regarding the United States and its “unwavering” dedication to Article 5, the one-for-all, all-for-one mutual defense provision that is at the heart of the NATO alliance, was deleted at the last minute from his speech—to the surprise and consternation of his own blindsided national security team.

“This was unambiguous,” the source said, “and it was taken out.”

Had Trump said the missing sentence—or any reference at all to Article 5 and the American commitment to it—he would have avoided a major headache with Western allies and hours of what aides are openly calling “cleanup duty” on the part of top advisers including Vice President Mike Pence, national security adviser H.R. McMaster and Defense Secretary James Mattis….

The White House has not denied that the speech was in fact changed, but has continued to insist—as recently as at Tuesday’s press briefing by White House spokesman Sean Spicer—that it does not matter….

And in fact, the source now tells me, even the preliminary draft of Trump’s speech from the White House sent to his national security officials included an explicit reference to Article 5—although the national security officials still pushed for the stronger version, with its mention of a “clear message” and “unwavering” support. There was such concern about how the NATO meeting would go—and making sure in particular that allies were sufficiently reassured by a president who seemed more intent on lecturing them about their insufficient financial contributions—that Mattis even rearranged his schedule to attend the session in person, “squeezing it in to be there….”