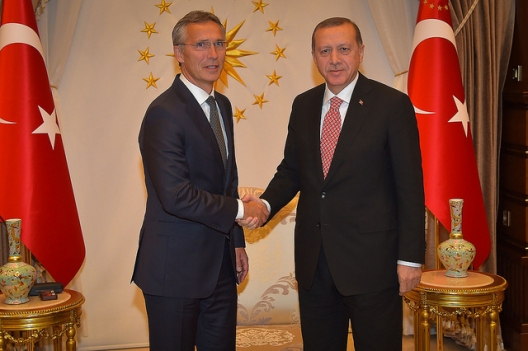 Turkey has fired hundreds of senior military staff serving at NATO in Europe and the United States following July’s coup attempt, documents show, broadening a purge to include some of the armed forces’ best-trained officials.

In a classified military dispatch seen by Reuters, 149 military envoys posted to the alliance’s headquarters and command centers in Germany, Belgium, the Netherlands and Britain were ordered on Sept. 27 to return to Turkey within three days.

Most were dismissed from service on their arrival, arrested and imprisoned, according to a Turkish military official at NATO and two farewell letters sent by departing Turkish officials emailed to colleagues at NATO and seen by Reuters….

In total, about 400 military envoys have been fired so far, the Turkish military official said. Two non-Turkish NATO staff familiar with the situation confirmed that Turkish personnel are being recalled but did not have more details….

Of the 50 military staff posted to the Turkish delegation at NATO’s headquarters in Brussels, only nine remain, according to the Turkish official who spoke to Reuters. Turkish military representatives were not present in recent meetings. “Turkey is not at the table,” the official said.

Turkey’s ambassador to NATO, who runs a 30-strong diplomatic team at the alliance HQ, declined to comment.

A NATO official said that Turkey has notified the alliance about military personnel changes at NATO commands in Europe and in the United States, adding that the issue has been discussed at a senior level between NATO and Turkish officials….

Some of those fired have not returned to Turkey for fear of prison sentences. They have had their passports revoked, bank accounts blocked and pension rights canceled. Spouses and relatives who are still in Turkey are banned by police from leaving the country and some are imprisoned, according to the two farewell letters seen by Reuters.

“They took everything from me, even my family,” said a U.S.-educated Turkish fighter pilot instructor, who was sent to NATO in Brussels for a three-year posting and was fired in August. The person has now requested asylum in Belgium….

One dismissed staff member, Colonel Aziz Erdogan, wrote: “The common denominator of these victims is that all of them have a … Western educational background and secular mindset.” Erdogan, who is no relation of the president, made the comment in a letter entitled “Unfortunate Farewell” to colleagues at NATO headquarters in Brussels.