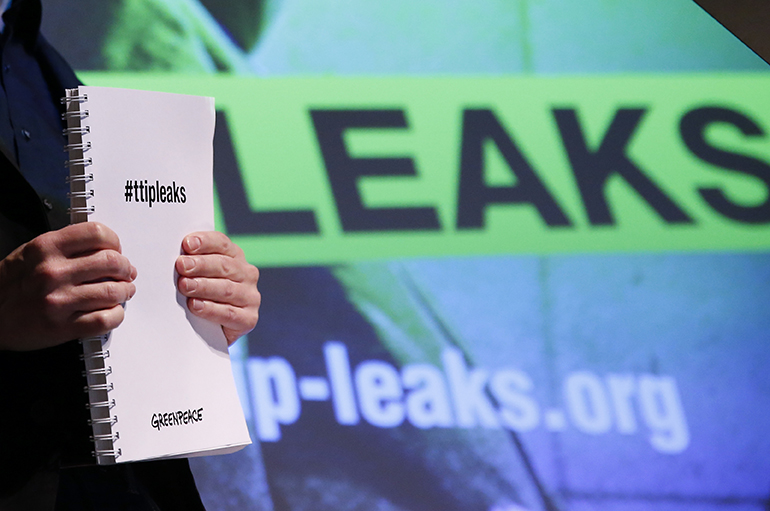 Volker Gassner of the environmental campaign group Greenpeace holds a copy of leaked classified documents from the Transatlantic Trade and Investment Partnership (TTIP) negotiations at a news conference in Berlin on May 2. (Reuters/Fabrizio Bensch)

Greenpeace’s decision to leak 248 classified documents related to the Transatlantic Trade and Investment Partnership (TTIP) negotiations only creates more confusion rather than contributing to an understanding of the complex process, according to the Atlantic Council’s Andrea Montanino.

By leaking the documents, Greenpeace intended to show that EU standards on environmental and public health will be lowered as part of compromises made during TTIP negotiations. Montanino, who is Director of the Atlantic Council’s Global Business and Economics program, cautioned against reading too much into the leaked documents noting that in such negotiations there are “tons of documents and proposals which are not part of the conclusion.”

Montanino, who along with Marie Kasperek, Assistant Director of the Global Business and Economics program, is an author of an Atlantic Council issue brief—Last Call for TTIP: The Views of European Diplomats in Washington—that will be published next week. The brief emphasizes the need for a transatlantic trade partnership as envisaged by TTIP.

“I think that there is a need for better communication, not more transparency,” said Montanino.

Additionally, at the Hanover Messe industrial trade fair in Hanover, Germany, on April 25, US President Barack Obama and German Chancellor Angela Merkel pushed for the conclusion of TTIP negotiations. Advocates of the deal say it can create more jobs and promote economic growth on both sides of the Atlantic.

On May 3, however, French President François Hollande said France could not accept TTIP as it currently stands because of opposition to unregulated free trade.

Andrea Montanino and Marie Kasperek discussed the significance of Hollande’s comments, the Greenpeace leaks, and the outlook for TTIP in an interview with the New Atlanticist’s Danielle Leopold. Here are excerpts of the interview.

Q: Greenpeace has leaked 248 pages of classified documents from the TTIP negotiations, which it maintains prove that EU standards on the environment and public health risk being lowered as a consequence of European compromises in negotiations with the United States. What are the implications for the TTIP negotiations?

Montanino: Clearly the leak of the preparatory documents creates more confusion than helping understanding because in this type of negotiation you have tons of documents and proposals, which are not part of the conclusion. The key point people in the United States should understand is that everything around food security, NGOs, GMOs, all these things are extremely important in France and Europe in general, mainly from a cultural point of view, not just from an economic point of view. So it’s important that all these are preserved in a way. I think one should not mix the meaning of opening up the market with protecting a certain product. You cannot open the market for parmesan because parmesan is something produced just in two tiny provinces in Italy, there is no market in a way. It’s a product that exists only there and not anywhere else. It’s not creating barriers or being protectionist, it’s simply recognizing that there are products in agriculture where there is not really a possibility to make a market because they are too narrowly linked to a specific territory.

Kasperek: I think the leak of the papers shows that there is just not the understanding in the public of what is actually true and what is not. For the elite, the leaks don’t change anything because it’s nothing new. That’s why both the White House as well as the European Commission have already come out saying [the information in the leaks is] nothing new and this is basically all available. In the end, what the leaks do is first of all confuse the general public who think “Oh my God, this is something completely new, there are leaks and this is what the actual agreement will look like.” No, these are negotiating positions and nothing more. The only thing the leaks do, in my view, is weaken the European negotiating position. It is not an outcome, TTIP is not written, and everything is still up for negotiation. These papers are just the ideas of negotiating positions and obviously they are going to aim for their highest wishes in those position papers and not for a compromise, that’s why it sounds harsh in some paragraphs.

Q: French President Hollande called for a halt in TTIP negotiations. What do his comments mean for the agreement’s prospects?

Kasperek: That President Hollande came out very critically of a conclusion of the negotiations did not come as a surprise to me. We shouldn’t forget that the US is not the only partner in the negotiations to have upcoming elections. France and Germany also have elections coming up. Looking at the ratings of Hollande, he is losing. So he is using a topic that sparks a lot of controversy to win voters back, especially from the left who are outright against TTIP. Exactly like his US counterparts, he is using TTIP and trade in general as the scapegoat, the bogeyman, but it will help him, or at least he hopes, to get more popular.

Montanino: One should understand whether the decision of the French government to come out publicly with such statements is due to internal politics or something else. My feeling is it is more due to internal politics. There is an issue of support of the current French leadership and clearly after these leaks it is very easy to jump on it and say we will protect our farmers, who, in a way, have always been a key constituency in France. The whole agricultural policy in Europe is designed around the French farmers and it’s very difficult to change because of their role.

Q: Your survey found that respondents think the level of transparency in TTIP negotiations is sufficient, so why then is transparency still cited as a major critique of the negotiation process?

Montanino: I think that there is a need for better communication, not more transparency. The European Commission published a lot of information probably not in a way that people read. I think they should make an effort to explain key messages to the public, which is difficult because it’s difficult to comment and explain something that is still under negotiation. Every time you have technical issues, it’s very difficult to explain. The information is there but it’s a matter of how you channel it to the people.

Kasperek: TTIP is not sexy. There just isn’t as much coverage. Yes, the European Commission is doing a really good job. However, nobody knows about it unless you follow Cecilia Malmström [European Commissioner for trade] on Twitter. But what is the opposition doing? They’re publishing everywhere about everything, creating myths. If you just do a Google search on TTIP, the first two pages are always negative. If you look at the sources, it’s personal blogs and Twitter, it’s not good media outlets or trustworthy sources. Everybody can publish a personal blog, but the general public doesn’t distinguish between the kinds of sources they see. They only see an interesting, catchy headline and they go for that and take it as the truth. I think what we have to do as a concerted effort between the public sector and the private sector is to make TTIP more interesting and relatable to the public on the regional level. It should be more accessible and interesting to the average consumer.

Q: The survey also found that there is a large gap between the opinions of diplomats and public opinion of TTIP within the member states of the European Union. To what extent is anti-Americanism a factor in the public’s perception of TTIP?

Montanino: I don’t think it is a key issue. Maybe it depends a little bit on the country. Of course, there are some radical groups that are anti-American. I think it’s more than anti-Americanism, it’s a matter of perception. The general perception is that standards are lower in America than in Europe. It’s difficult to say whether this is true or not, but our position is that the agreement should increase the standards and set standards that bring other countries, like China to also increase their standards.

Q: How does the thirteenth round of negotiations that took place last week change TTIP’s outlook?

Kasperek: I think, as both sides of the negotiating table have said, they have reached a lot of common ground, but we will have to wait until the summer to actually be able to say whether there will be an agreement. Both sides agree substance will drive timing and not the other way around because neither side wants a “TTIP Light,” so they will only agree on something that has substance. They are aiming to have consolidated texts on all areas they want covered in TTIP by the summer otherwise it will become very difficult to reach an agreement before Obama leaves office.

Q: Former US Defense Secretary Leon Panetta said last week that if the Trans-Pacific Partnership (TPP) is not passed into law by the end of this year, it is not likely to ever pass in the United States. Why is it important to TTIP to get a TPP and what would be the consequences if we don’t get a deal?

Kasperek: [If a TPP is concluded] they will have the capacity to focus on TTIP only because here in the United States the focus has been on the TPP and that is reflected in the Obama administration’s trade agenda for this year. With TPP being concluded, the attention naturally shifts to TTIP. [The Obama administration] had to focus on TPP because it was so much further along and they had negotiated on that for so many years, so it was natural that they had to conclude that before moving on.

Danielle Leopold is an intern at the Atlantic Council.