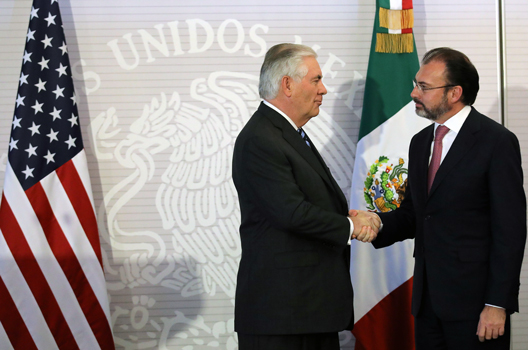 If the current tension in the US-Mexico relationship gets out of hand it could disrupt crucial cooperation between the two countries on checking the flow of unauthorized migrants into the United States, said an Atlantic Council analyst.

“The great danger here is that, in all of this tension, something is going to boil over,” said Peter Schechter, director of the Atlantic Council’s Adrienne Arsht Latin America Center.

Mexico provides essential security assistance in deterring migrants from Central America crossing into the United States. “That, too, is in danger if things boil over,” said Schechter. “I imagine all cooperation will stop and, therefore, all of these people will start flowing upward.”

Schechter participated in a Facebook Live discussion with Thomas Corrigan, a senior research assistant in the Latin America Center, on February 24. Both agreed that China will fill the void if the United States and Mexico are unable to repair relations that have frayed as a result of US President Donald J. Trump’s demand that Mexico pay for a border wall that he wants to build.

“This is an opportunity to make China great again,” said Schechter. Trump has campaigned on the promise to “make America great again.”

Corrigan suggested that ongoing cooperation between US and Mexican officials provides hope for the future of the relationship. “There’s opportunity in the day-to-day issues that the secretaries work on to continue the trade and national security cooperation that makes the US-Mexico alliance so important,” he said.

Schechter was hopeful that “the talks with Mexico will progress to a point where we can take a lot of the tension out, and over the coming months return to a relationship with Mexico… that is stable and positive.”

US Secretary of State Rex Tillerson and Secretary of Homeland Security John Kelly visited Mexico on February 22-23 and sought to offer reassurances regarding Trump’s immigration policy. Trump’s description of his plan to deport undocumented immigrants as a “military operation” dominated his cabinet officials’ meetings in Mexico. Kelly sought to assure his Mexican interlocutors that there would be “no mass deportations.”

This disconnect between the statements from Trump and the secretaries creates “additional confusion” in the relationship, said Corrigan.

Over the past twenty-five years, there has been growing cooperation between the United States and Mexico—particularly in the realms of trade and security—resulting in “a real integration between the two countries,” said Schechter.

In particular, the North American Free Trade Agreement (NAFTA) has resulted in a great deal of prosperity for both nations. However, the tangible benefits of the agreement are not immediately recognized. Trump has described NAFTA—a trade deal between the United States, Canada, and Mexico—as the “worst deal ever.”

According to Corrigan, “in a lot of the states that President Trump won in the election, there’s not a full appreciation of what NAFTA did.” He described the large amount of agricultural exports coming from the US heartland and going south to Mexico. If relations between the two countries grow more strained, Mexico could buy those goods elsewhere.