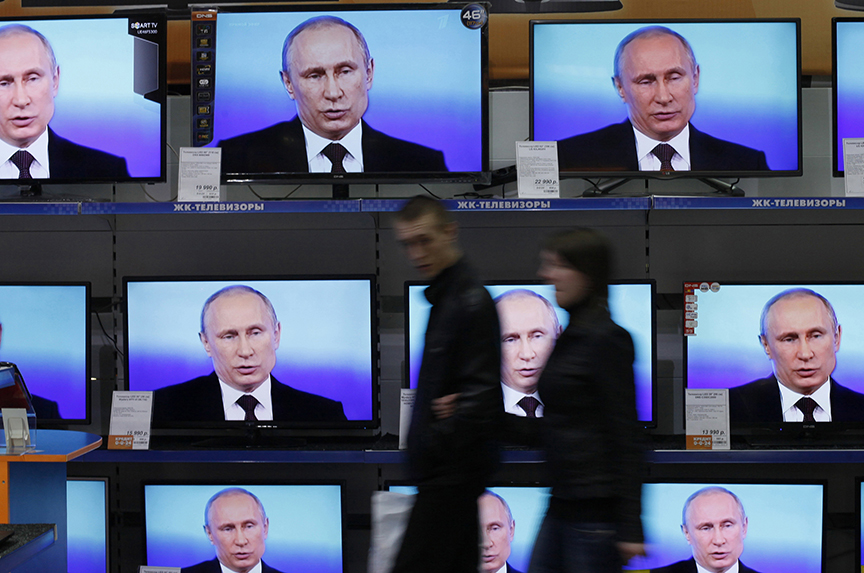 “Fake news” is the term du jour in the current discussion on the new media landscape. We knew long ago, however, about the prevalence and proliferation of fabricated stories produced by so-called media entrepreneurs looking to make a profit with flashy headlines or fly-by-night “news sites” churning out outrageous click-bait stories. The Russians (and the Soviets before that) had a different word for it: dezinfomatsiya, literally translated as disinformation. In the United States, we called it propaganda.

In the Cold War years, the Soviet disinformation machine produced and spread lies that aimed to damage the United States’ reputation as a value-driven and principled nation. The most famous example was an early 1980s KGB campaign that spread disinformation that blamed the CIA for inventing the AIDS virus as part of a biological weapons program. While the Soviets eventually dropped this story under US pressure and as part of the opening of relationship under Mikhail Gorbachev’s Glasnost initiative, this case demonstrated how the USSR waged information war at the time: as a binary battle between good and evil, in which each opponent sought to show that the other was evil.

In today’s media environment, binary narratives no longer work because the media landscape has changed profoundly since the Cold War in three important ways. First, how we consume information has changed: individuals no longer tune into the same nightly news broadcasts. Rather, we go online, to social media platforms, or to opinion shows instead of news shows. Only one in five Americans reads newspapers for news. This number has been falling over the years, according to recent surveys. The Pew Research Center found that while most people still get their news from television (57 percent), that number breaks down unevenly across age groups: half of all young people (18-29 years old) rely on social media and online sources, compared to 85 percent of the older generation (65 years and above) who still tune into television, which is increasingly dominated by partisan politics and talking heads rather than serious newscasters.

Second, there are many more sources for news (or fake news) online and on television, and because media literacy is no longer a common part of the average school curriculum, few Americans have the critical skills to discern propaganda from real news. RT, the Russian state-sponsored television network, has masterfully used this to its advantage. Before 2009, RT was Russia Today. Back then, its allegiances were clear. Reinvented as RT, the network rebranded itself as a subversive news organization that prompted its audience to “question more” and get a different point of view than that offered by the established media. This was a smart move. While few Americans watch RT—the network has been accused of greatly exaggerating its viewership numbers, which are likely no higher than 30,000 in the United States. Those who do watch RT or tune into its YouTube feed likely don’t know that the network is fully funded and directed by the Russian government. Unlike the BBC, which receives its funding from a household tax levied by the British government, RT’s funding and governance structure are opaque.  RT is also not an explicitly independent network, a fact that becomes obvious very quickly as one struggles to find any critique of the Russian government in its reporting. And there’s no shortage of developments that deserve harsh criticism: from the economic stagnation and the grim situation of Russian towns to the Kremlin’s aggressive foreign policy in Ukraine and Syria. RT’s slogan to “question more” does not apply to the Kremlin.

RT is just part of the story. New “news” sites with legitimate sounding names but no editorial boards or journalistic credentials pop up like mushrooms after a storm to skew the message on any geopolitical event by “reporting” an alternative point of view. They mix facts with fiction to obfuscate reality and undermine the very notion of truth. On social media, Russian trolls and bots attack critics, confuse the objective narrative, and drown out reason with noise. New think tanks and research organizations with vague names but without a transparent funding structure or recognizable expertise appear with “analysis” ready in support of a pro-Kremlin view. And once a seed—be that a meme, a lie, or some mix of truth and fiction—is planted, it travels across media platforms at astounding speeds. This is the third difference between now and then: disinformation spreads at lightning speeds thanks to our highly-connected societies. What used to take months or years of constant hammering at the same topic in newspapers and television broadcasts, now takes minutes or seconds to find its way across the globe.

Add to that the fact that more and more people rely on their social connections on social media to get their news, effectively producing closed echo chambers. Once a seed is planted in such a network, it’s shared and posted many times over. These closed networks function as “disinformation amplifiers”— spreading, reconfirming, and citing a story until its origins are lost. And once a story goes viral online, it’s only a matter of time before it’s picked up by a mainstream news network, now completely devoid of its original source, and reported as fact by journalists and editors forced to work on increasingly impossible deadlines to keep up with the news cycle and doesn’t wait for fact checking.

This is why disinformation is so much more dangerous today than it was during the Cold War: a successful disinformation campaign is no longer defined by whether or not someone believes the Soviet or the Western version; rather, a successful campaign is one that leaves no trace of its origins, dissolving into the mainstream like an ink drop in water.

Alina Polyakova is director of research for Europe and Eurasia at the Atlantic Council. She tweets at @alinasphere.