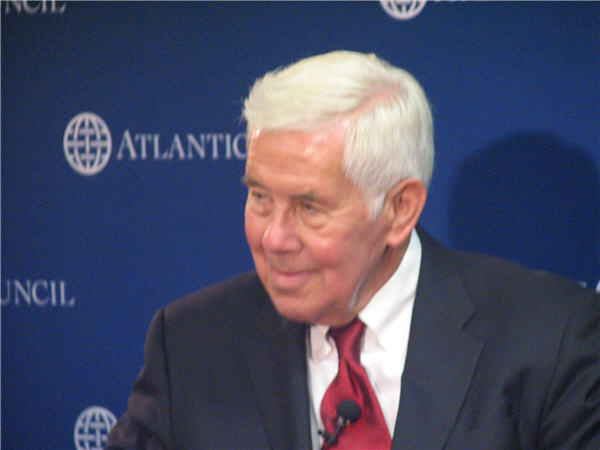 Senator Richard Lugar, speaking at the Atlantic Council, made a passionate plea for a stronger NATO commitment to East and Central Europe, including “boots on the ground.”

The Ranking Member of the Foreign Relations Committee lamented President Obama’s decision to abandon the Poland and Czech missile defense system in favor of a sea based alternative. While conceding the possibility that the new approach was more technically sound, the old one was seen in the region as “a reaffirmation of the U.S. commitment” in the aftermath of Russia’s invasion of Georgia and the sense that NATO’s Article V might be weaker than advertised.  Consequentally, “The risk is that whatever strategic benefit the Alliance might realize from the new version of missile defense will be outweighed by the intra-Alliance costs to cohesion of this decision.”

To assuage the fears that this has changed, Lugar suggested that there be NATO “boots on the ground” throughout the region along the lines of the Patriot missile batteries that the United States will have in Poland. Along those lines, “A re-invigoration of military exercises in Eastern Europe and joint planning for Eastern European contingencies would be a first step.”

More fundamentally, Lugar argued that it’s vital that the Alliance “hold out the prospect of membership to qualified aspirant countries, including Ukraine, Georgia, and the entire Balkan region.”  He asserted that, “We must not repeat the folly of the early days of the Cold War, when the appearance of a rigid U.S.-drawn defense perimeter in the Far East invited the perception that we would abide any geopolitical upheaval behind that line.”

Asked in the Q&A session by Ambassador Richard Burt about Russian pressures on Ukraine leading up to this fall’s elections, Lugar stated that it was “an ominous potential crisis” and that it was vital was to start paying attention now rather than to wait until for disaster to strike.

These are bold statements from a man of Lugar’s prestige and stature.  I remain skeptical that there is political will in the United States to make this level of commitment to the emerging states of Eastern Europe, especially at the risk of setting back relations with Russia.  And I’m beyond skeptical that there exists consensus among NATO’s 28 states to do much beyond issuing proclamations.