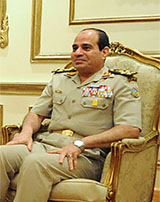 There was never any doubt about the outcome of Egypt’s presidential elections: with the full power of the state behind him and no real competition, Field Marshal Abdel Fatah el-Sissi has won more than 90 percent of the vote.

But desperate efforts by the government to boost the turnout by extending voting to three days have punctured the myth of Sissi’s overwhelming popularity and the notion that he can rule Egypt successfully without regard to the views of millions who showed their ambivalence or disapproval by staying home.

The government insists Sissi’s toll far exceeded the 12 million votes Mohamed Morsi took in Egypt’s first – and so far only — competitive presidential elections in 2012. However, the 40 million people Sissi exhorted to turn out did not do so even by the government’s own claims. With no independent monitoring, it is hard to know how many votes Sissi actually received.

The lack of enthusiasm for Sissi is not surprising. Despite their many disappointments since the overthrow of Hosni Mubarak three years ago, Egyptians have become used to a certain amount of political freedom and saw little reason to participate in an election whose results were seen as predetermined. Also, the support for Sissi that developed during Morsi’s misrule has faded since last summer’s coup. Egypt’s economy continues to languish with high unemployment and sparse investment and is only able to dole out subsidized necessities because of cash handouts from Saudi Arabia and the United Arab Emirates (UAE). Egyptian Foreign Minister Nabil Fahmy, visiting Washington earlier this month, said the Egyptian economy needs “to grow 8-10% a year just to make ends meet.”

A recent poll by the Pew Research Center showed that 72 percent of Egyptians are unhappy with the direction of the country. Barely half of those polled — 54 percent — supported last year’s coup against Morsi, the same percentage that said they approved of Sissi. According to the poll, 43 percent opposed the ouster of Morsi, 45 percent viewed Sissi unfavorably and 42 percent expressed a favorable opinion of Morsi, who languishes in jail along with thousands of other supporters of the outlawed Muslim Brotherhood and members of the liberal opposition. A government crackdown has killed some 2,000 people in just the last year and Sisi has equated political dissent with terrorism.

The elections thus were hardly a ringing endorsement of the new president. Egyptian commentators say that Sissi relied too much on state dominance of the media and are worried about what his failure to stage more successful elections says about his ability to govern effectively. As a military man, he appears unaccustomed to dealing with a society that refuses to obey orders.

Michele Dunne, an expert on Egypt at the Carnegie Endowment for International Peace, told VOA that Sissi might need to rethink his initial decision not to form a political party given the difficulties in mobilizing voters this week. “He thought he could do it without a machine,” she said. Dunne also called official claims of a 47 percent turnout “not credible.”

With his halo cracked, Sissi would do well to show some humility and reach out to his opponents but that may be too much to expect in a region where politics has reverted to zero sum. Dunne noted that Sissi is obliged to continue his crackdown on the Muslim Brotherhood by his Saudi and UAE backers, who have also outlawed the organization. Sissi will also be hard-pressed to institute needed economic reforms, she said, out of fear that he will antagonize a lukewarm base. “Sisi has support but it’s soft and it’s falling,” Dunne said.

At some point, a way must be found to reintegrate supporters of the Muslim Brotherhood and liberal groups back into the political process. The former are too numerous and influential to isolate or expunge, while the latter was responsible for sparking the 2011 revolution and is the source of innovation and intellectual heft. Both groups are likely to be emboldened by the low turnout for Sissi and to continue protests both inside and outside Egypt that will scare away tourists and potential investors.

Clearly, elections without political pluralism are not the solution.While millions of Egyptians were sitting out this week’s vote, tens of thousands of Syrian refugees were lining up in Lebanon and elsewhere to approve a third seven-year term for their embattled president, Bashar al-Assad. Many feared retribution if they did not vote but the chances they can return to Syria in the near future look dim. Assad will of course “win” these elections; the only question is whether he claims a bigger percentage of the vote than Sissi.

Such hollow democracy disappoints those who saw genuine promise in the uprisings of 2010-2011 and feeds Islamic extremism. In his speech at West Point on Wednesday, President Barack Obama underlined the importance of true democracy and respect for human rights as “an antidote to instability and the grievances that fuel violence and terror.” In advance of the Egyptian election results, he promised to continue security cooperation with the new government but also to “persistently press for reforms that the Egyptian people have demanded.”

The United States has little choice but to hold its nose and work with Sissi against real terrorists who threaten Egypt and the interests of the US and its other allies. But counterterrorism partnerships of the sort Obama described at West Point are not sufficient to help the region achieve stability and prosperity.

Obama, who has repeatedly quoted Martin Luther King in saying that “the arc of history bends toward justice,” expressed optimism that democratic change will eventually come to countries that have suffered authoritarian rule. Social media has brought new sources of information to once isolated peoples and there is less tolerance everywhere for corruption, incompetence, hypocrisy and lies.

One thing is certain: Sissi’s path will be bumpy and he will not be another Nasser, Sadat or even Mubarak. Egyptians are done with presidents for life.