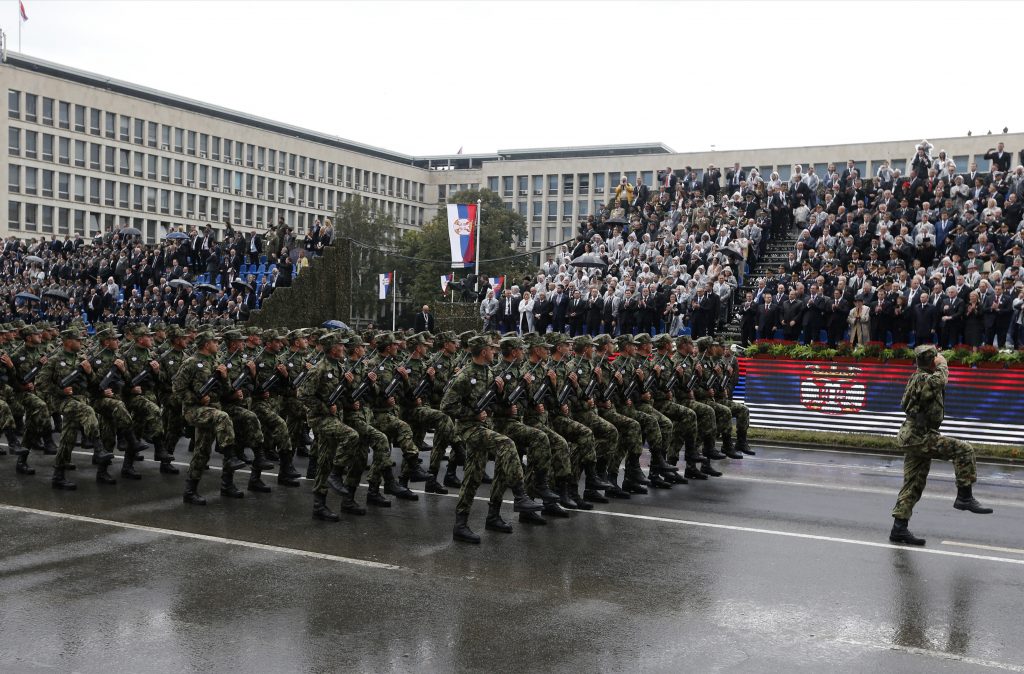 Serbian troops in Belgrade high-step past Serbian officials and visiting Russian President Vladimir Putin on October 16, in Serbia’s first military parade in many years. Serbia is trying to balance its application to join the European Union with its historic and cultural ties to Russia. (Reuters/Marko Djurica) 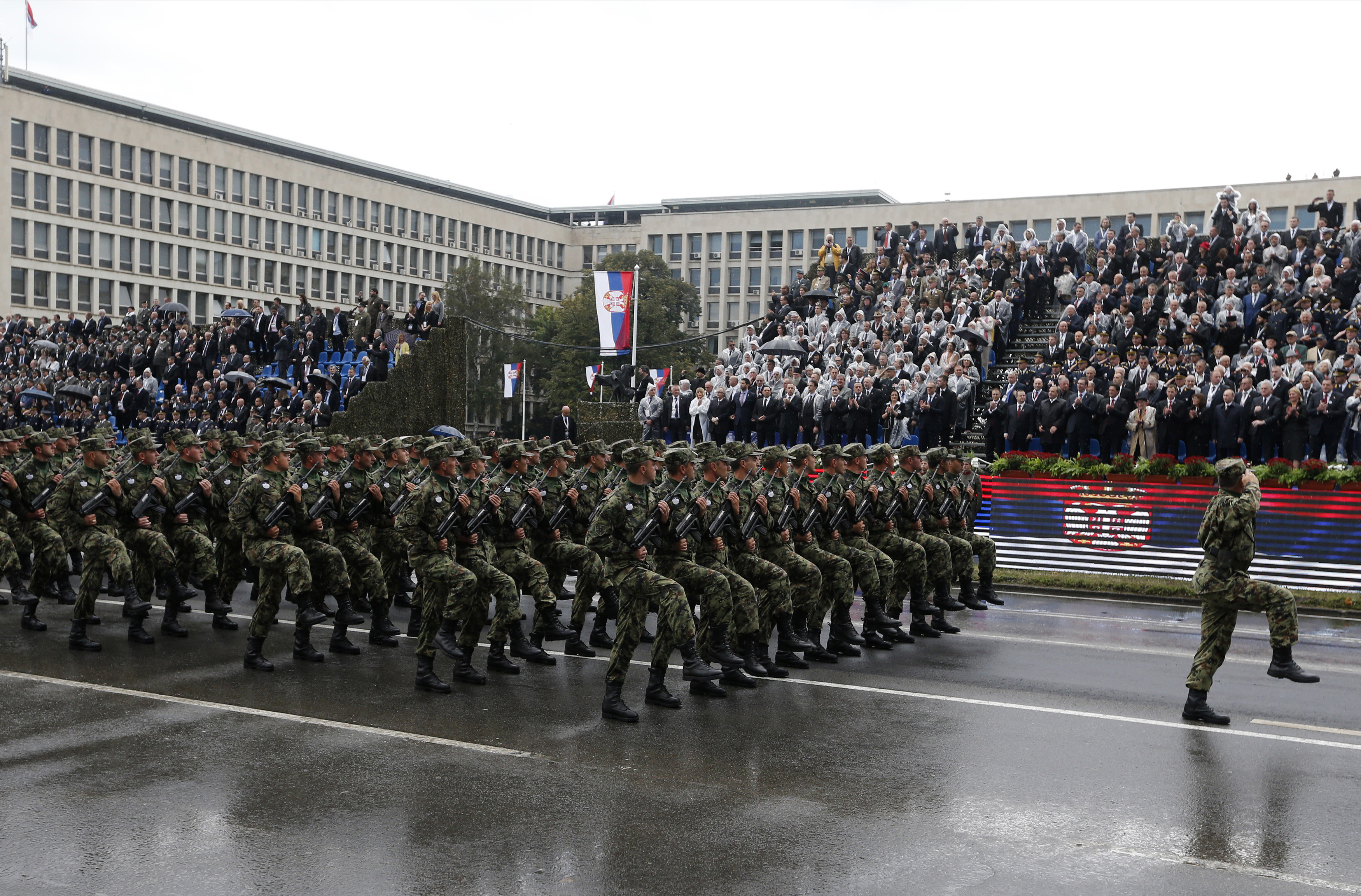 Europe’s peace is at risk from the wars in Ukraine, Syria and Iraq—and nowhere more than in the Balkans, where several states of the former Yugoslavia form the weakest spot in Europe’s security structures.

Two anti-Western campaigns—one by violent Islamist militants and the other by Russia’s battle for influence—are growing in the western Balkans, where nationalist, ethnic and religious conflicts remain volatile two decades after the wars that demolished Yugoslavia. Albania’s defense minister underscored this danger in a visit to Washington last week, urging the European Union and NATO to step up their help for efforts by western Balkan states to democratize and join European institutions.

For Europe’s security, “the weakest point is right in our [Albania’s] back yard,” amid five non-NATO and non-EU states—Serbia, Kosovo, Macedonia, Montenegro, and Bosnia-Herzegovina, Defense Minister Mimi Kodheli said. Those countries contain a knot of historic conflicts in the middle of a NATO-ordered Europe, she noted in a strategy session convened by the Atlantic Council’s Brent Scowcroft Center on International Security. 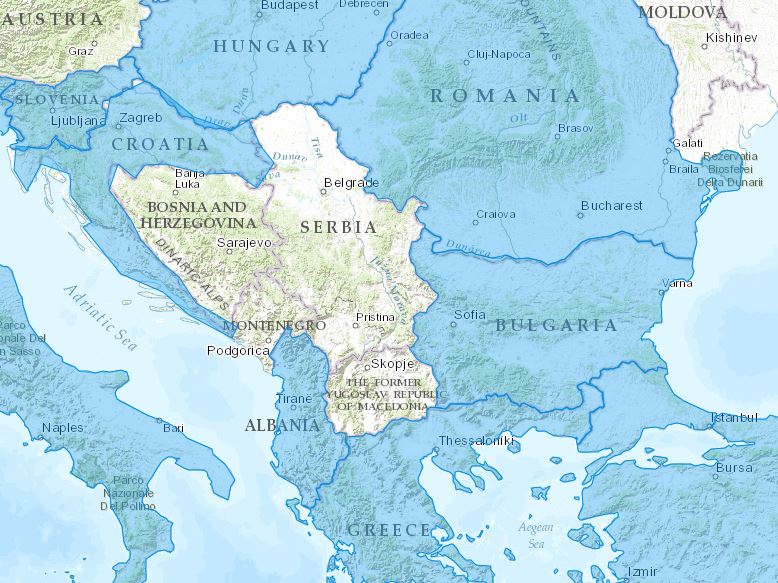 “Since the rise of nationalism in Europe, Russia has had a clear and concrete project on the Balkans,” Kodheli said. It has sought to dominate the region via the Slavic identity and Orthodox Christianity that it shares with millions of Balkan residents, especially the Serbs. “For two centuries, no matter the regimes leading Russia or the new Balkan states, the policy has always been the same,” Kodheli said. “The region I come from has always been seen as an appendix of Russia’s expansionism towards the Mediterranean basin. And dreams of westernization of the Balkans, [have] never been accepted by Moscow.”

In the two decades since Yugoslavia’s disintegration, western economic investment in the region has remained relatively low. By contrast, Kodheli notes, “nowadays, banks, enterprises, tourist infrastructures, oil and gas companies in the western Balkans, are being targeted by Russian money.” As President Vladimir Putin has refocused Russia on the Balkans as its desired ally in Europe, “political forces in many countries of my region [now] … look to the Russian way of thinking as the best alternative for the future of their countries.”

The Russian appeal has reenergized Slavic militants. “The number of those people from the Balkans participating in the Russian hybrid warfare is visible and worrying,” Kodheli said. Some dozens of Serbian nationalist fighters from the 1990s wars in the former Yugoslavia formed units and have fought this year in support of the Russian-sponsored takeover of Ukraine’s Donbas region.

At the same time, Islamic militant “jihadists are looking for fertile soil in Europe,” Kodheli said, recruiting fighters among the Muslim communities prominent in Bosnia, Albania, and Kosovo. “The number of people participating from [the] western Balkans is increasingly worrying. They have families, friends and neighbors left behind. Is there enough hope for them given by the West?”

To hear Kodheli, what the western Balkans region mainly needs from the West is focused, consistent attention. A model, she said, was provided by German Chancellor Angela Merkel in her initiative August 28 of hosting all eight western Balkan leaders in Berlin. With Merkel and European Commission President Jose Manuel Barroso, the eight leaders agreed to keep working on essential steps to stabilize the region and move its countries toward EU membership. These included:

Such engagement must be stepped up, Kodheli said at the Atlantic Council, because the EU too often seems uninterested in working actively with the western Balkan states. “If the EU wants our countries to one day be prosperous member states,” it must reach out more energetically and regularly, she said, rather than “placing all responsibility for achieving this on these countries themselves.” (Kodheli’s own country, Albania, joined NATO in 2009 and formally applied that same year for EU membership.)

The same goes for NATO, Kodheli said. The alliance offers countries a clearer path than the EU’s for eventual membership, she said. “But, taking into account the gravity of the security environment nowadays, we need to move quicker.” Stability for the Balkans will come only “by integrating this gray area of Europe into the Euro-Atlantic community,” she said.