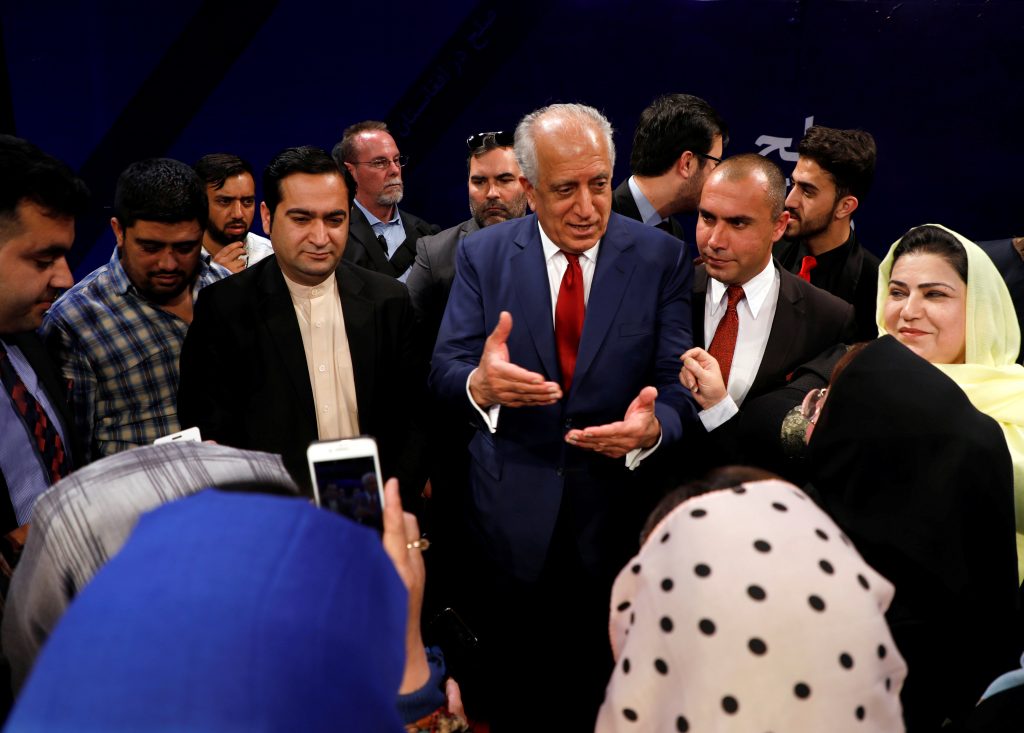 This is a collaborative product of former US diplomatic officials who have worked on Afghanistan.

We strongly support a negotiated peace in Afghanistan, a limited force drawdown as part of getting peace negotiations going, and the substantial force drawdown later that peace would allow.

Equally strongly, we believe that US security and values, including support for women, require that a full troop withdrawal come only after a real peace. How our troop presence is managed will have a critical influence on the chances for successful peace negotiations, the future of the fight against the Islamic State, and the chance for Afghans to pursue representative government.

A few critical guard rails stand out in order to avoid the risk of Afghanistan becoming a new center of terrorism harboring groups dedicated to attacking the United States and to avoid betraying our own values by depriving Afghans of the chance to determine their own future.

Much of the current debate has focused on the substance of US-Taliban negotiations, which will become clearer as more details of the agreement announced September 2 are revealed, and the effects of a substantial US troop withdrawal as part of a peace settlement. The devil is in the details, however.  Understanding which details matter requires considering a few points.

First, it is not clear whether peace is possible. The Taliban have made no clear statements about the conditions they would accept for a peaceful settlement with their fellow Afghans, nor do they have a track record of working with other political forces.

Secondly, there is an outcome far worse than the status quo, namely a return to the total civil war that consumed Afghanistan as badly as the war with the Russians and something that could follow a breakdown in negotiations if we remove too much support from the Afghan state. If the State totters, those with nasty memories of life under the Taliban will fight on. That disaffected group would include Afghanistan’s minorities, which together comprise a majority of the Afghan population.

In a civil war, there would be large areas of the country in which the Islamic State (IS) presence could expand its already strong foothold. Regional and other players such as Iran, Pakistan, and Russia would all support Afghan allies, likely fueling the fighting. Under these circumstances it is likely that the Taliban would maintain their alliance with al-Qaeda. All of this could prove catastrophic for US national security as it relates to our fight against both al-Qaeda and IS, and it would underscore to potential enemies that the United States and its allies are not reliable.

This gives rise to the first essential point: a major troop withdrawal must be contingent on a final peace. The initial US drawdown should not go so far or so fast that the Taliban believe that they can achieve military victory. In that case, they will not make compromises for peace with other Afghan political forces.

The second point goes to core US values. Whether or not the United States wants or is willing to keep some forces engaged, we should not undercut the legitimate government in Afghanistan by keeping them out of negotiations. Giving way to the Taliban’s refusal to negotiate with Afghan government would let the Taliban determine with whom it will negotiate. Afghans deserve to determine their government and who will represent them in peace negotiations.

For this to happen, there is a strong argument that presidential elections planned for September should go forward. Millions of Afghans have risked, and again are prepared to risk, death to vote. It is not up to the United States to deprive them of this opportunity to determine who speaks for the Afghan state.

One widely debated alternative to elections now calls for creating an interim government instead. The argument is based on two main ideas. One is that elections may require a runoff (required by the Afghan constitution if the winner of the first round has less than a 50 percent margin). This could take months, be disputed, and delay peace negotiations. The second is that a newly elected government will not be willing to negotiate new arrangements necessary for peace with the Taliban.

However, it is vital to recall that there is no consensus among non-Taliban Afghans now on who would form such an interim government. The internal division and the record of the last forty years suggest that the struggle to decide who would be in such an interim government and what positions they would have would be long, quite possibly as long as the delay over holding an election. As for the issue of a newly elected president’s willingness to negotiate needed institutional changes, all candidates could be pressed to make a clear statement that they are open to constitution changes that might be required by a peace accord.

The Taliban have spoken vaguely of a reduction of violence but have made it clear that the war will go on against the Afghan government. And, whatever the Taliban might agree, there will still be a war with IS. Hence, while we agree strongly that negotiations are essential, it is equally essential that the Afghan state have a government able to govern and fight while negotiations take place, as well as a chance to sustain itself if negotiations fail.

The Afghan military is already paying a heavy price, but morale and willingness to fight would be seriously undermined by the lack of a central government authority. A major risk is that the Afghan military would break apart with increased doubt about what it is fighting for, and the country would return to civil war leaving space for al-Qaeda and IS to grow, whether or not the Taliban is sincere about pledges to break its long-term alliance with al-Qaeda.

The fundamental point, however, is that the United States should not be determining the answer to such an essential issue for the future of the Afghan people. That decision must be theirs.

We do believe that to protect our security interests we must not leave completely until peace is achieved. Further, we must not betray all those who have believed our promises or stepped forward with our encouragement to promote democracy and human rights including highly important progress in women’s rights. We must not yank so much support from our Afghan friends that they are unable to protect themselves or the chance to keep moving forward with a representative democracy.

What then are we advocating?

A major withdrawal of US forces should follow, not come in advance of real peace agreement. While some reduction of troop numbers is possible to start negotiations, counterterrorism forces and US/NATO airpower need to remain to deal with the terrorist threat of IS (and al-Qaeda) as much as the Taliban. Any troop withdrawal schedule should not go on to an automatic glide path determined by dates rather than conditions.

A fundamental mistake of the Obama administration was the constant repetition of dates for departure.  This encouraged the Taliban to fight on and undercut confidence among friendly Afghans. That this preference for dates was a serious mistake was recognized by US President Donald J. Trump’s original policy declaration of August 2017; it is still a correct approach.

Some may say that this is just a concealed way to keep the United States and its allies engaged in a major war. This is not so. In fact, our current involvement is no longer a major war for us. The Afghans are already doing almost all of the fighting and the dying. US fatalities are tragic, but the number of those killed in combat make up less than 20 percent of the US troops who died in non-combat training incidents last year. US direct military expenditures in Afghanistan are approximately 3 percent of annual US military spending, down by about 90 percent from the high point of the war. As the Afghan air force improves, something that is now happening, the costs and personnel can drop further. The lives and money being expended are serious, but the costs are ones we can sustain for negotiations to result in a sustainable peace, something that will only happen if the Taliban believe they too must make compromises.

If a peace agreement is going to succeed, we and others also need be committed to continued support for peace consolidation. This will require monitoring compliance, tamping down of those extremists opposed to peace, and supporting good governance and economic growth with international assistance. This promise of sustained US and international engagement would give space to see if the Taliban and Afghan government have significant common interests, such as avoiding civil war, maintaining international economic assistance for a very weak economy, defeating IS, and responding to widespread war fatigue among Afghans to serve as basis of successful talks, eventual agreement, and effective implementation.

It is critical that the United States make clear that full withdrawal will not occur on fixed dates but will, on the contrary, require conclusion of a real and clearly defined peace. Continued and unambiguous support for Afghan elections, should Afghans choose that course, allied with a determination to maintain residual counterterrorism forces, air support, and economic assistance, will give Afghans a chance to determine who negotiates for them without being undermined. The United States and our international partners should then vigorously support a new leadership’s serious engagement to negotiate the peace that the vast majority of Afghans desire.

Ambassador Robert P. Finn was the US ambassador to Afghanistan from 2002-2003.

Ambassador William Wood was the US ambassador to Afghanistan from 2007-2009.

Ambassador E. Anthony Wayne, was US deputy ambassador to Afghanistan and coordinating director for development from 2009-2011. He is also a nonresident senior fellow in the Atlantic Council’s Global Business and Economics Program.

Ambassador Ryan Crocker was the US charge d’affairs in Afghanistan in 2002 and the US ambassador to Afghanistan from 2011-2012.

Image: US envoy for peace in Afghanistan Zalmay Khalilzad talks with Afghans after a debate at Tolo TV channel in Kabul, Afghanistan April 28, 2019. (REUTERS/Omar Sobhani)