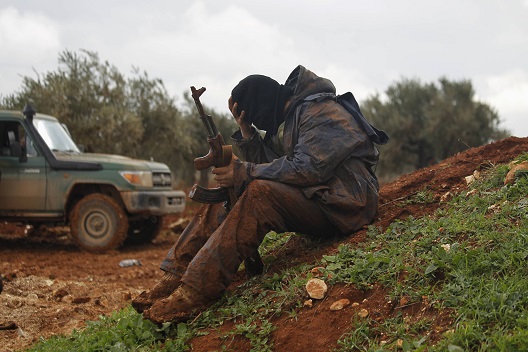 This is the third part of a series of interviews with the lawyer Ayman Jalwan. It highlights the difficult choice that Syrians face—dying in the war zone that Syria had become, or fleeing the land they love. Last year, Ayman Jalwan and his wife said goodbye to their families and joined the wave of citizens leaving the country. First they had to make it to Turkey. Then they needed to cross the cold Mediterranean to Greece. After that, they would have to deal with human traffickers in Eastern Europe to reach one of the few nations willing to welcome them: Germany. In this blog series, Ayman Jalwan explains the decision to leave, the trials he and his wife encountered along the way, and the consequences of their decision.

I tell you, it would be an honor for me to do my duty and serve in the military. But not this army. Because this army now just serves one person, Bashar al-Assad—not a country. This army kills people, and who are those people? These are my people, my friends, my neighbors. I can’t say, “Give me a gun, and I will go kill this man.” Why must I kill him? Because he refuses Bashar al-Assad’s wish to stay in this army?

No one can imagine President Obama giving the order, “Go serve in the military and kill your own people. You come from New York? Go and fight on the battlefront in Oklahoma, because the people in Oklahoma are against the rule of Obama.” You can’t imagine that, right? If you were told to do this, you would refuse to follow this order. But if the army gives you the order to serve in the military to fight North Korea, of course you will go. This is our duty, to protect our country. There are many dangers in the world.

But what—you want me to fight my own people? Even if he is Alawi or Shia, and I am Sunni, I don’t care. I can’t kill them! I have many friends who are Alawi, I have many friends who are Christian. I can’t fight them; I can’t. Because they are Syrian. Even if someone makes trouble for me, or does me some wrong, I can’t fight them, I can’t. Many people—Alawi or Shia—have killed friends of mine. Many friends. I heard some of my friends then say, “I will take revenge on all Alawi.” I have heard this myself. When I speak with them, though, I say no, you cannot kill every Alawi or Shia because someone from them killed your friends or your brother. I can’t punish the entire group for a crime committed by one. I can’t. Bashar al-Assad, he’s responsible for these crimes. We should fight Bashar, but not the Alawi, Shia, or Christians. No. We should punish Bashar. He is the one who is pushing for these differences between Sunni, Shia, and Alawi.

For many years, all these groups lived together and there was no problem! You can see this in my pictures from home: In our street there was a church. In Deir Ezzor and in Homs, among our neighbors, there were 11 or 12 Christian families, three from the Alawi—it was like that. The Christians do not share in this war. They made a decision not to stand with any group. The problem is between the Alawi and the Sunni; this is the problem. And many new Shia groups have been arriving in the country. We don’t have many people from the Shia sect in Syria. The Shia we see in Syria now, many of them are soldiers coming from Iran and from Hezbollah in Lebanon and from Iraq just to fight for Bashar. Most of Syria is Sunni, though. The Alawi make up a very small percentage.

So yes, of course, in Syria, we accepted that situation: life together, it was no problem. Many people from the Alawi are against what has happened in this revolution. Because they must accept that there will be a war based on religion, not just the fight against terror or something else. So Bashar al-Assad has made trouble for his people, the Alawi. And many Alawi are not happy about it, but they have no chance. They have to stand with Bashar al-Assad. That’s what happened in Syria.

Image: Photo: February 19, 2015 A rebel fighter of al-Jabha al-Shamiya (the Shamiya Front) covered with mud carries his weapon as he sits near the front line with Bashkuwi village, north of Aleppo February 19, 2015. Battles in and around the Syrian city of Aleppo have killed at least 70 pro-government fighters and more than 80 insurgents after the army launched an offensive there, a monitoring group said on Wednesday. REUTERS