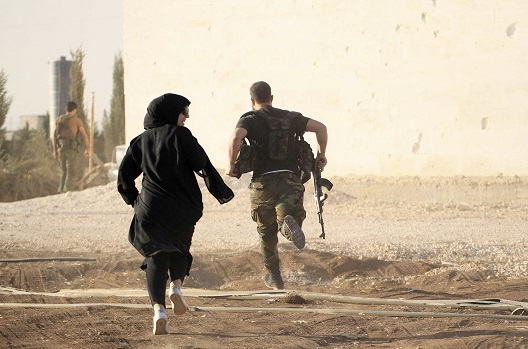 The people of Deir Ezzor, Syria live under both regime bombardment and Islamic State (ISIS) oppression, with neither side willing to concede this key city. Deir Ezzor is strategically important—it not only contains oil wells, but also serves as the gateway to Ramadi and Raqqa, the latter which ISIS calls its capital. Meanwhile the civilians of Deir Ezzor languish under wanton killing and oppression.

Syrian regime forces control the mountains overlooking the city from the west and the neighborhoods in the city’s north and west. ISIS controls the surrounding countryside and most of its central neighborhoods. However, ISIS only controls one entrance to the city center, Jisr al-Siyasiya in the east, and thus is hunkered down and surrounded by the regime on three sides.

From their mountain redoubt, regime forces shell the ISIS-controlled neighborhoods with heavy artillery. The mountain also lies on the supply route from Deir Ezzor Airport to the regime’s portion of the city. ISIS controls the surrounding countryside, enabling it to blockade the flow of food to the 400,000 civilians who fled to these regime-controlled areas in fear of regime bombs. The regime refuses to allow the civilians to leave these neighborhoods, effectively doubling the blockade.

When ISIS entered Deir Ezzor the regime cut off education, electricity, and other necessities to its opponent’s territory. The local councils, emergency services, and field hospitals that provided services free of charge soon ceased operations because of lack of resources. Thus the situation for the people living in ISIS controlled areas is a living hell, and it is does not differ much for their relatives who live in the regime-controlled areas.

Among the regime’s most deadly weapons is the barrel bomb; considered an indiscriminate weapon, it has killed more people than ISIS and the Nusra Front combined. It does not distinguish between civilians and combatants, and has no purpose other than to kill people and destroy cities.

In March 2015 regime helicopters dropped barrel bombs on the ISIS-controlled neighborhood of Sheikh Yassin, destroying four buildings. Only one woman survived, trapped beneath the rubble. ISIS cordoned off the area, prevented civilians from helping her, and did not attempt to free her from the rubble, but they allowed her husband and her son in the area. The woman’s wounds were not severe, which gave hope to the rescue effort, but she remained under the rubble for too long and died before her husband and son managed to reach her. When why they did not allow civilians to intervene to save the woman’s life, the militants replied, “You are not related to her, thus you cannot see her without her veil.”

Daily life under ISIS is surreal. Men cannot wear jeans or smoke. Women’s dress must consist of a black abaya (a full-length, long-sleeved gown), black gloves, and a veil, so that they are covered from head to toe in black.

Whenever ISIS launches an attack on the besieged neighborhoods, it erects checkpoints on Jisr al-Siyasiya, the only access point to the eastern countryside from the city. At this checkpoint they prevent the entry of tobacco because it is evil, and what is evil is forbidden, and its usage could delay their victory.

In January 2015, I was on my way to the market to buy some vegetables, when suddenly an ISIS patrol car from the Accountability Department, which ensures locals do not commit anything ISIS has forbidden, stopped me. They requested that I show them my personal ID, and I complied. I do not smoke and my beard is long, so there was no basis for a citation. They took the ID and told me to return to my house and change out of my jeans, and then present myself to the Accountability Department’s headquarters. I did as they instructed, and when I entered the headquarters—which is no different from the regime’s torture centers—I waited for my turn. My name was called and I entered the chambers of Judge Abu Shaddad Aldzroaa, a Saudi, who asked me to sit down and describe what happened when the patrolman, named Abu Anas, had stopped me. The judge asked Abu Anas if I resisted his instructions, and Abu Anas answered in the affirmative, stating that I resisted his instructions and only complied after they took my ID.

I could not help but laugh, because I had not resisted his orders; these men can easily manufacture accusations of apostasy or blasphemy to have someone executed. No one dares disobey them.

The judge stated, “Wearing jeans is forbidden and carries a penalty of thirty lashes of chastisement (which are light and mainly symbolic, so the perpetrator feels guilt for the offense committed). However, disobeying the orders of God’s men on earth is a serious offense that cannot be taken lightly, thus we also impose a penalty of thirty true lashes.” Abu Anas then ordered that judge’s ruling be carried out.

I did not utter a single word. They placed my hands behind my head and turned me to the wall. They began with the symbolic lashes using thin rods; it did not hurt and ended quickly. They then exchanged the rods for electrical cables to carry out the true flogging. The purpose of this corporal punishment was not to correct my behavior as they claimed—these lashes were malicious. While flogging me, the man repeated that “we” did not desire the rule of God on earth, that “we” wanted debauchery and evil drinking, that “we” did not want an Islamic state, as if he were blaming the entire people of Deir Ezzor for ISIS’s inability to defeat the regime. I held my resolve and did not utter a sound. They let me leave immediately afterwards.

Mohamed, a 40 year old man from Deir Ezzor, was subjected to a similar situation when he was charged with smoking. Mohamed stated that, “In Deir Ezzor, ISIS only holds sway over a single entrance to the ISIS controlled neighborhoods. However if a second entrance to the city was found, through which people can easily enter and exit the city, then the people would mount a revolt against ISIS without any support from the U.S.-led coalition. The same people who not too long ago stood against regime tanks and planes with nothing but light arms could free themselves on their own from the oppression and backwardness of ISIS. The lands of Deir Ezzor belong to its people, not to the migrants or the regime forces, and this is what will happen sooner or later.”

Haj Yasser, an elderly man in Deir Ezzor, stated that, “The regime and ISIS are not one faction; it is common interests that have brought them together. They intend to humiliate the people so that they pledge allegiance to ISIS. They deprive the people of food and drink in the regime controlled areas in order to convince young men to join the regime, where they are rewarded with food for joining. All of this is in the interest of both parties, and at the end of the day we the people lose the most. However every day it is clear to us that the people of Deir Ezzor will resist until the end.”

The chants and slogans of the revolution remain in the hearts of Deir Ezzor’s isolated people. They endure the regime’s shelling with resolve, and resist ISIS in the only way they can— with their morals, principles, and wit—as they wait for the chance to once again wander the city’s forgotten neighborhoods and alleyways.

Fikram is a civil activist from Deir Ezzor. He worked as a paramedic on the fronts, in the media with Alwan Team, and with the human rights organization SAMA.