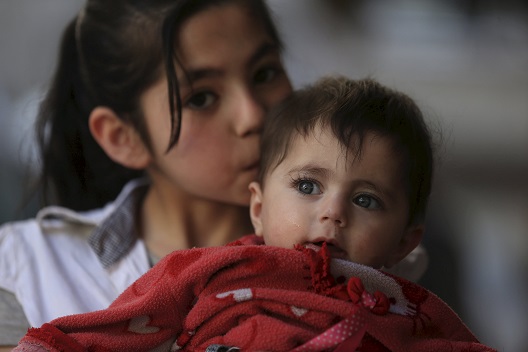 Judy, age 7, carries 8-month-old Suhair along a street near the Syrian Arab Red Crescent center, minutes before what activists said was shelling by forces of Syria's President Bashar al-Assad in the Douma neighborhood of Damascus May 6, 2015. (Reuters/Bassam Khabieh)

That which is painfully clear amid the complexity of Syria’s horrific conflict is the operational absence of the Obama administration in protecting Syrian civilians. Some two years ago, a senior White House official told visitors from Capitol Hill that there were no attractive parties in Syria: that there was merit in simply allowing the fire consuming the country to burn itself out. That civilians—many of them women and children—would be disproportionately incinerated in the resulting inferno seems not to have struck the official as morally relevant or policy pertinent. Yet now, as reports of regime shakiness begin to accumulate, some additional practical, policy consequences of having done virtually nothing to protect Syrian civilians from an Assad regime campaign of mass homicide come into focus.

To put the matter succinctly, the willingness of the Obama administration to make do with moralistic rhetoric about Assad regime war crimes and crimes against humanity has led it to an astounding analytical conclusion: he who has authorized acts of mass homicide on a daily basis—Bashar al-Assad—ought not be removed from power too quickly lest Islamist rebels take Damascus and conduct massacres in communities involuntarily implicated by regime criminality. The barrel bombing, starvation sieges, chemical attacks, and door-to-door atrocities have been so widespread, so intense, and so unopposed by a hollowed-out West that now the specter of additional mass atrocities—perhaps genocide—transcending Arab Sunni Muslims presents itself.

Assad’s strategy from the beginning has been to bind with blood his own Alawite community and others to the political survival of his corrupt clan. One key facet of the strategy has been mass homicide directed largely (though not exclusively) at Syria’s Sunni sectarian majority. Another has been to facilitate the rise of the Islamic State (ISIS or ISIL) and secure its help in marginalizing non-jihadist nationalist alternatives. The rhetoric-rich, action-free response of the Obama administration has been an unintended but decisive enabler of Assad’s survival strategy; an accidental but instrumental underwriter of his clan’s political insurance policy. Now, the prospect of mass murder enveloping other Syrian communities emerges as yet another unintended consequence of substituting strategic communication for strategy itself.

If the administration had considered civilian protection operationally important from the beginning, would the result have been getting bogged down in someone else’s civil war; the doing of stupid stuff? President Barack Obama continues to insist that the only alternative to leaving people utterly unprotected—the alternative he insists his critics favor—would have been the invasion and occupation of Syria. The President has misleadingly made it a matter of all or nothing, thereby justifying his choice of nothing. He did so as recently as May 15 in an interview with Al Arabiya’s Nadia Bilbassy.

Whatever use a straw man argument might have as a here-and-now excuse for inaction or as an alibi for future historians, it fails the test of truth telling. No one has advocated invading and occupying Syria. Even the most dedicated advocates of protecting human beings from mass murder have not recommended such a step. Ways and means that are much more modest are available to an administration willing to transcend talk and do actual things. Examples abound.

Is the protection of Syrian civilians from Assad regime mass homicide at or near the top of talking points employed whenever senior administration officials meet with Iranian and Russian counterparts? Is there a diplomatic strategy aimed specifically at persuading Tehran and Moscow to pressure their client into abandoning mass homicide? Has President Obama wrung from his military advisors every conceivable option—short of invasion and occupation, and even short of bombing airfields—to stop (or at least complicate) the barrel bombing and (if necessary) neutralize possible mass murder alternatives such as Scud missiles and field artillery trained on residential neighborhoods? Is there an ongoing diplomatic offensive aimed at binding regional partners to the creation of safe havens inside Syria? Is there a move afoot to transcend an anemic train-and-equip program by creating an all-Syrian national stabilization force capable of protecting Syrian civilians?

Are any of these alternatives in play? Or is the President indifferently content to believe there is an ungovernable slippery slope to invasion and occupation that inevitably overrides his commander-in-chief prerogatives? Just how engaged has the President been in elucidating ways and means of mitigating the 21st century’s premier humanitarian abomination? Is the leisurely, terrifying traverse of barrel bomb-laden regime helicopters immune from countermeasures?

Blaming the United Nations Security Council for US inaction is not enough. Yes, Ambassador Samantha Power was right in Kuwait to suggest that Russia and Iran are accomplices to Assad regime atrocities. True, those who developed the “responsibility to protect” doctrine could not have anticipated that a facilitator of mass murder would be a permanent member of the Security Council and therefore able to block the kind of international community intervention deemed legitimate by the doctrine’s advocates. Yet even as the Assad regime returns defiantly and contemptuously to chemical warfare against civilians, the administration that drew a red line and took full credit for relieving the regime of chemicals seems operationally inert.

This inertness may well persist until January 20, 2017. For some of those who have supported Barack Obama and even served in his administration, it is the source of unceasing anguish, frustration, anger, and regret. True: no administration containing Samantha Power can be deemed perpetually and irretrievably hopeless on matters of civilian protection. Still, the moral and operational failure to date of the United States to try as best it can to protect Syrians from the heartless, merciless depredations of the Assad regime ought to convince all Syrians—except, of course, for the family whose greed has turned Syria into a charnel house—that they are on their own. If patriotic Syrians cannot find ways to overcome their divisions and unite against both Iran and ISIL while themselves pledging to protect civilians, they will lose their country forever. If Iranians, Russians, Turks, and Gulf Arabs see civilian vulnerability merely as an inevitable cost of doing business, Syrians should rise up against the lot of them.

It is humiliating for administration officials to suggest that the man who President Obama said, on August 18, 2011, should step aside, perhaps ought not leave too quickly. Yet it is humiliation well earned. Failure to protect civilians—failure even to try—has fueled a fire that has consumed Syria and burned all of its neighbors. It has perhaps set the stage for new horrors yet to come. Giving the protection of Syrian civilians operational priority as opposed to lip service can save lives, build a foundation for political conflict resolution, and prevent ongoing mass homicide from assuming the additional dimension of genocide. Yet it will take more than words. It will take this President changing course. For as bad as Syria and its neighborhood are today, they can be immeasurably worse twenty months from now.