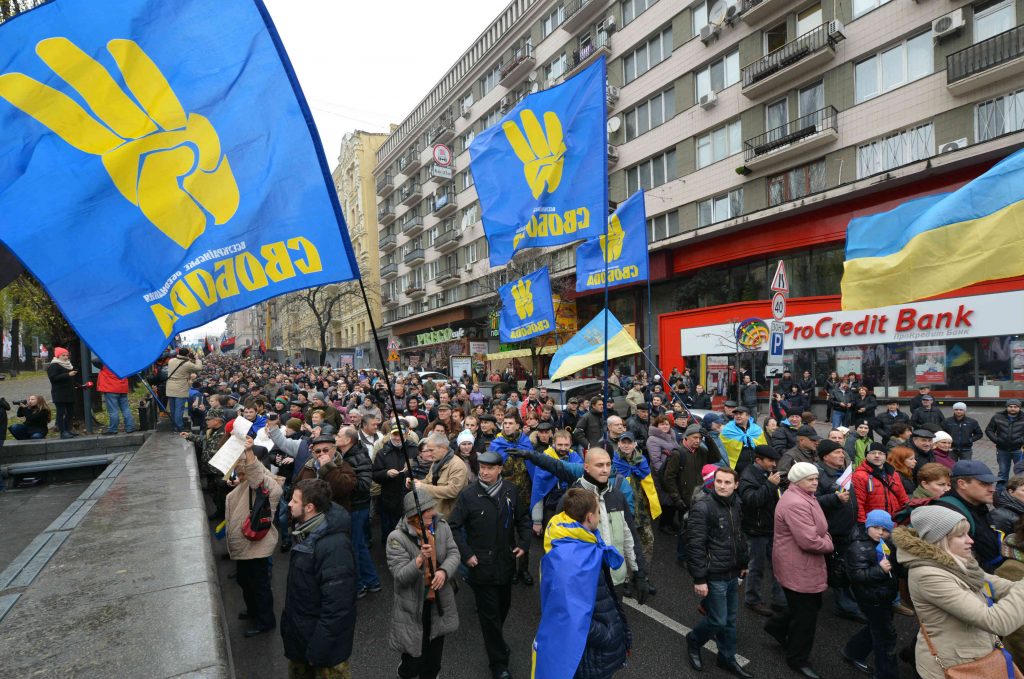 Ukrainians march toward a pro-EU rally in Kyiv on November 24, 2013. Svoboda, or “Freedom Party,” was the only far-right party to ever gain a foothold in Ukraine’s parliament in 2012. Widespread discontent with the deeply corrupt government of then Ukrainian President Viktor Yanukovych drove support for Svoboda. Once Yanukovych was out, Svoboda’s support evaporated. The party didn’t make it into parliament in 2014. Credit: Ivan Bandura/Creative Commons 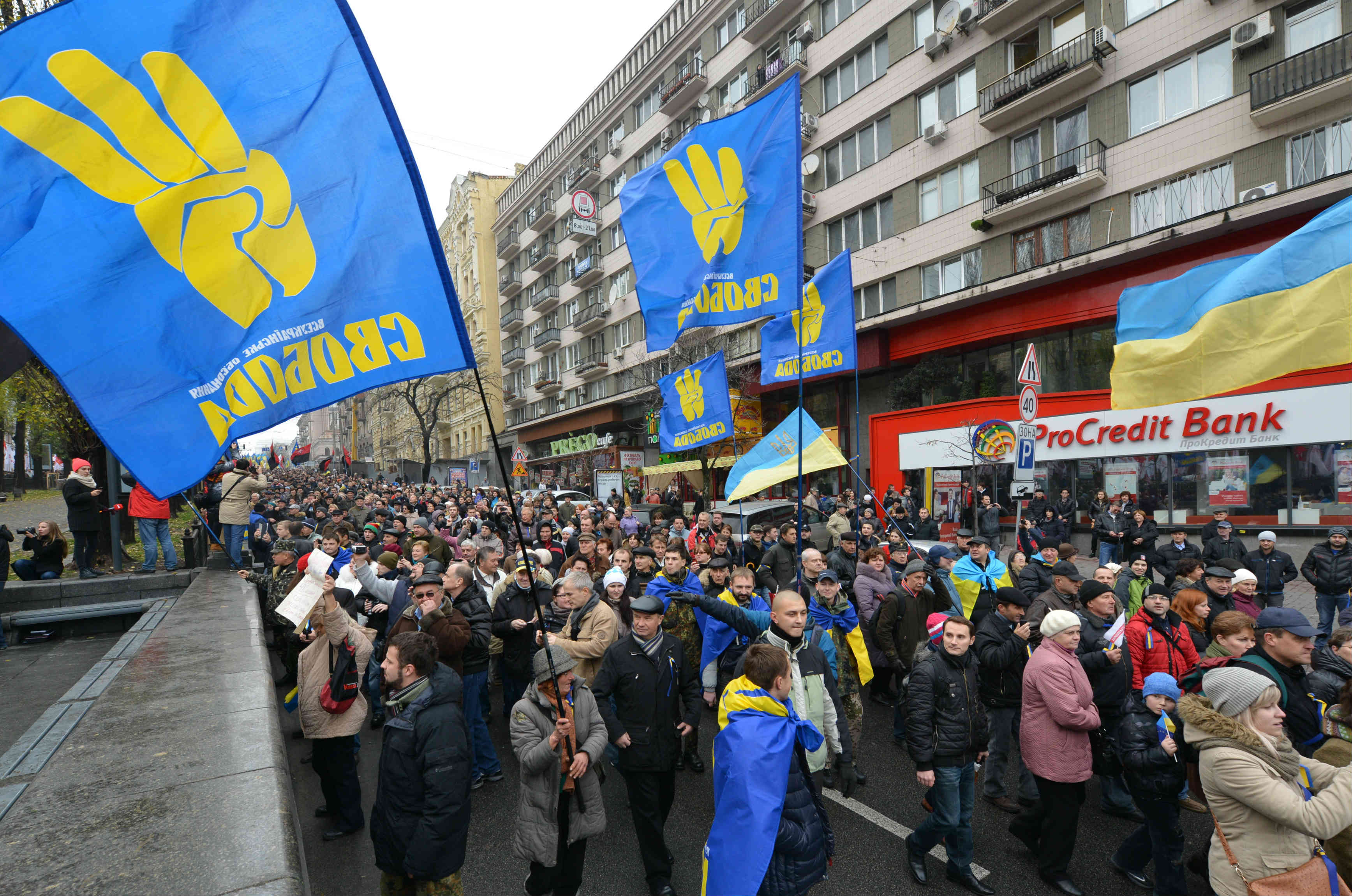 The Russian government and its proxies in eastern Ukraine have consistently branded Kyiv’s government a fascist junta and accused it of having Nazi sympathizers. Moscow’s propaganda is outrageous and wrong. In fact, Ukraine’s radical right political parties—Right Sector and Svoboda—have been marginalized.

But Ukraine’s economy is in crisis. It is widely assumed that economic crises create opportunities for far-right parties to grow because citizens blame the government for hardship. To express their discontent, voters turn to anti-establishment parties that tout nationalist populist ideas. As Ukraine’s economy continues to falter and the 2015 local elections approach, should Ukraine watchers be concerned about the potential growth of extreme right-wing parties? Absolutely not.

Svoboda, or “Freedom Party,” was the only far-right party to ever gain a foothold in Ukraine’s parliament when it took 10.44 percent of the vote in the 2012 parliamentary elections. At the time, and even more so with the benefit of hindsight, it was easy to see what drove support for Svoboda: widespread discontent with the deeply corrupt government of then Ukrainian President Viktor Yanukovych who was allied with Moscow. Once Yanukovych was out, Svoboda’s support evaporated. The party didn’t make it into parliament in 2014.

In Eastern Europe, I found that support for far-right parties doesn’t hinge on economic growth, immigration, or the electoral system. Rather, political stability and social trust are more important determinants of support for the far right. When the government is perceived as unstable in Eastern Europe—Bulgaria, Czech Republic, Estonia, Hungary, Latvia, Lithuania, Poland, Romania, Slovakia, Slovenia, and Ukraine—a radical right party is more likely to win support than in a Western European country. In the late 1990s in Eastern Europe, support for radical right parties begins to decline just as political conditions start to stabilize.

If political stability and trust do impact voting behavior in Eastern Europe, shouldn’t we see more support for far-right parties in war-torn Ukraine? Not so fast. Trust in government has always been abysmally low in Ukraine. Regardless of the party in power, Ukrainians consistently express little trust in their government. And politics has been in flux for more than a decade. So far, these unstable political conditions have not led to greater ethnic fissures and mass societal polarization. In fact, while trust in government has remained consistently low, trust between individuals is on the rise.

But there’s even more reason not to worry about the potential growth of far-right parties in Ukraine: their numbers are limited and their methods for spreading their message rely on personal relationships. To better understand why people join them in the first place, I spoke with more than 100 far-right activists, many of whom were members of Svoboda, between 2009 and 2012. Activists were primarily recruited through friendship networks, and because of that, even some of the most ardent activists were ambivalent about the political aims or ideology of the party before joining. They developed well-formed political beliefs after continued interaction with other activists and participation in political events. Individuals were “radicalized” through the process of mobilization.

In Eastern Europe, support for the far right has remained low, but as these countries become more integrated into European Union policies and politics, they may find themselves moving further to the right, putting them closer to their Western European neighbors. As in the West, Eastern Europeans are more likely to see themselves in national terms first and as Europeans second.

In conclusion, concerns about the growth of far-right parties in Eastern Europe are exaggerated with the exception of Hungary. Far-right parties do not have a foothold in Ukraine and even if the economy continues to muddle along, their numbers shouldn’t increase. In terms of popular support for the far right, it is the West that appears to be a bigger concern.

Alina Polyakova is the Associate Director of the Dinu Patriciu Eurasia Center at the Atlantic Council, where she oversees the Ukraine-in-Europe Initiative. Her book, “The Dark Side of European Integration: Social Foundations and Cultural Determinants of the Rise of Radical Right Movements in Contemporary Europe,” will be published by ibidem Press and Columbia University Press in August 2015.