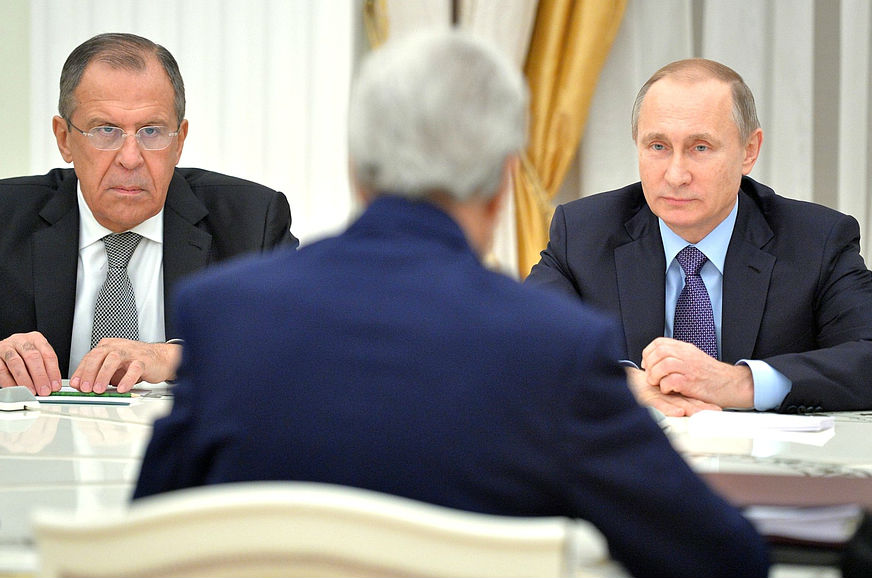 When US Secretary of State John Kerry goes to Moscow this week, he should keep in mind that Russia’s recent military engagements in Ukraine and Syria represent an attempt to manipulate perceptions. The Kremlin wants to position itself as a peer of America, open to cooperation against ISIS, but capable of military threats against US allies, such as Ukraine, Turkey, and the Syrian opposition.

The Kremlin is pursuing important geopolitical objectives in both the Ukrainian and the Levant theaters. These include securing bases in Crimea as well as in Syria, cultivating the Kurds as a strategic client in the Middle East, and denying Ukraine sufficient independence to pursue NATO and EU membership.

That’s not the only thing Russia is up to though. Another key objective is securing the homeland from perceived US meddling. A significant portion of the ruling elites fear that a US-inspired “color revolution” could end their control.

By bombing Syria, Putin shot his way to the negotiating table like a cowboy shoots his way to the bar in a Western. Syria not only surpassed Ukraine as a focus of Western attention ― it also brought the Kremlin to the negotiating table: Putin wants to trade concessions in Syria for the lifting of sanctions and softening of the West’s stance on Ukraine. However, these bold moves to attain the perception of parity are also a cover-up for a Russia that is weak and getting weaker. Here’s why.

Russia’s policy in Ukraine has become a race to the bottom. The Kremlin is doing all it can to ensure that the political and security crisis in Ukraine eliminates the pro-Western government, replacing it with Moscow stooges who are waiting in the wings.

“Ukraine is not for the living,” a former senior Kremlin official told me in Moscow recently. “If it federalizes, it will fall apart. If it unifies and cracks down under a nationalist banner, it will do the same.” He means that Ukraine will collapse before Russia does, and Moscow intends to pick the pieces.

Strong words, but Moscow’s difficulties are there for all to see. From 2014 to 2015, the ruble was devalued by 24 percent, buying power fell by 20 percent, and there was a 3.7 percent decrease in Russia’s GDP.

Russia has failed to diversify its economy. No new industries have been created and expats are leaving in droves. The number of expats from the United States and Western Europe fell 34 percent between January 2014 and January 2015.

Nepotism is rampant. First Deputy Prime Minister Dmitry Rogozin’s son was set to manage the property department of the Ministry of Defense. The sons of senior Russian security chiefs occupy key positions: National Council Chairman Nikolai Patrushev’s sons are in the Russian Agricultural Bank and GazpromNeft. Foreign Intelligence Head and former Prime Minister Mikhail Fradkov has one son in Vnesheconombank and another is the Deputy Manager of Presidential Affairs. Putin’s Chief of Staff Sergei Ivanov’s son heads Sogaz, the second biggest insurance company in Russia, which insures giants such as Gazprom.

Meanwhile, Russia’s social systems, including education and health care, are faring more poorly than usual. As Russia’s cash-strapped regions struggle, an increasing number of government employees will be affected by a new health care law. In January, protesters took to the streets in Moscow to oppose a new healthcare reform that included unexpected hospital closings and mergers.

The destruction of what little remains of Russia’s pluralistic political space and the purge of its remaining liberals continues. At times this is as scandalous as it is bizarre. The Russian media recently denounced a recent opposition meeting in Vilnius as a gathering of the “future US occupation administration.” Nikita Mikhalkov, an influential movie director and a hardliner close to Putin’s circle, called for the state to prosecute Gorbachev and Yeltsin for treason. The Russian Orthodox Church has called for revisions to the high school literature curriculum, including elimination of some works by playwright Anton Chekhov. Lastly, in a move worthy of the Iranian ayatollahs, the Russian Ministry of Culture had black stickers placed on an exhibition poster of paintings by Hieronymus Bosch.

Putin’s foreign policy paradigm is reaching a dead end. With China’s economy slowing, it has less need for Russian oil and gas. While Moscow has spoiled its relations with the West, China has not become the market or the geopolitical option Putin had hoped for in 2014.

Russia is not North Korea with nukes, but it’s a less happy place than it was even during the economic crisis of 2008-2009, and is certainly much less vibrant than it was in the 1990s and early 2000s.

Russian elites, including someone I spoke with on Russia’s Forbes Top 100 list, understand that the country needs structural economic reform and legal reforms.

The majority of Russians I spoke with think that such reforms are impossible without political liberalization. However, Putin and his inner circle of KGB veterans would not tolerate such “system liberals” as the former Finance Minister and First Deputy Prime Minister Alexei Kudrin and Sberbank Chairman German Greff in positions of substantive power.

So where is Russia heading? To a dark place. A country in this condition is inhospitable to foreign investment, homegrown entrepreneurship, and a cultural renaissance. Many of those who could leave did leave, taking their talent with them.

While Russia remains a nuclear power and can muster overwhelming force against its neighbors, it is far from being on equal footing with the United States. When listening to his Kremlin counterparts’ demands on Ukraine and Syria, Kerry should remember this.