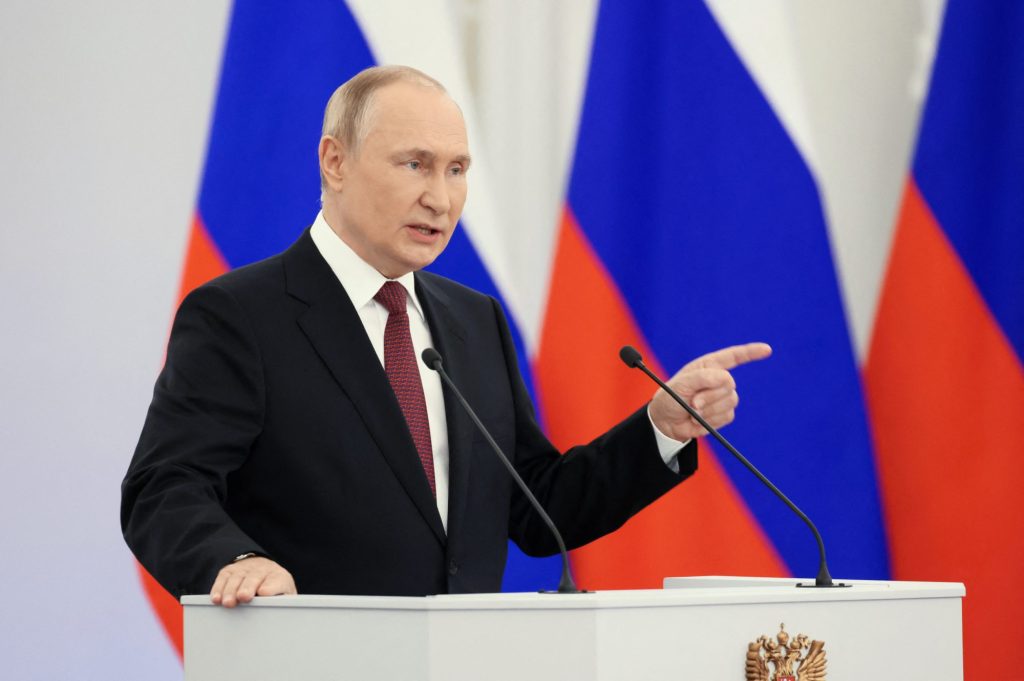 Russian President Vladimir Putin delivered one of his most unhinged performances on September 30 in a speech announcing the annexation of Ukraine’s Donetsk, Luhansk, Zaporizhzhia, and Kherson regions. Addressing hundreds of Russian officials during a ceremony in the Kremlin, Putin had relatively little to say about the war in Ukraine. Instead, his address was dominated by some of the fiercest anti-Western rhetoric of his 22-year reign.

Putin branded Western leaders as “racist” and claimed they were guilty of “spreading Russophobia all around the globe.” However, his main focus was the allegedly imperialistic policies of the West. The Russian leader supported his argument by reciting a long list of crimes committed in the name of Western imperialism including everything from the colonization of Africa to the mid-nineteenth century Opium Wars in China. “For centuries, the West has claimed to be bringing freedom and democracy to the world,” he declared. “In fact, the exact opposite is true.”

Putin is apparently oblivious to the absurdity of condemning imperialism while at the same time committing the most brazen act of imperial aggression in modern European history. Perhaps this should not come as a surprise. After all, for years he has been transforming Russia into a fascist state while presenting himself an anti-fascist. Why not also pose as an anti-imperialist while engaging in naked imperial aggression?

Many veteran Kremlin observers commented that this was comfortably the most vitriolic public attack on the West ever delivered by the Russian leader. “I’ve watched a lot of Putin speeches over the last 10-15 years and this is the most anti-US one by a really long way,” tweeted Financial Times Moscow bureau chief Max Seddon.

Putin’s decision to focus his annexation address on the alleged injustices of modern Western imperialism was in part motivated by a desire to distract domestic attention away from Russia’s embarrassing battlefield defeats in Ukraine and place the war in a broader geopolitical context. But it also aimed to position Russia at the forefront of a new global coalition of anti-Western forces. At one point in his speech, the Russian leader spoke specifically of ending US hegemony through an “anti-colonial movement” to be led by Moscow.

This emphasis on anti-imperialism reflects Russia’s broader geopolitical realignment as the Kremlin comes to terms with the fallout from the disastrous invasion of Ukraine. Moscow now appears to recognize that there is little chance of repairing relations with Europe or the US. Instead, Russia will seek to mobilize global anti-Western sentiment and play the role of counter-weight to Western dominance in the international area.

It is far from clear whether this gambit will be successful. At present, few countries from the developing world seem ready to align themselves with Russia. Judging by voting habits at the United Nations, only a handful of global pariahs such as Syria and North Korea are currently prepared to side with the Kremlin. Meanwhile, both China and India have signaled in recent weeks that they are far from happy with the ongoing invasion of Ukraine.

Nor are Putin’s anti-imperial credentials particularly convincing. While he has tried to blame the war in Ukraine on everything from NATO expansion to imaginary Ukrainian Nazis, it is now painfully obvious that the invasion is actually an old-fashioned war of imperial aggression. Putin himself admitted as much in summer 2022 when he compared the invasion to the eighteenth century imperial conquests of Russian Czar Peter the Great. His decision to annex approximately 15% of Ukraine now removes any lingering doubts.

Today’s speech should cure Western policymakers of any illusions regarding the possibility of a pragmatic relationship with Russia as long as Vladimir Putin remains in the Kremlin. Ukrainian President Volodymyr Zelenskyy has already drawn the necessary conclusions and declared that there will be no more negotiations with Putin. Given the gravity of the situation, similar clarity from other Western leaders is now urgently needed. Putin has effectively declared war not only on the West but on the entire rules-based system of international relations. He is attempting to redraw the map of Europe by force and is holding the world hostage with the thinly-veiled threat of nuclear apocalypse.

It is crucial that the democratic world stands up to Russia’s nuclear blackmail. Failure to do so will have potentially catastrophic consequences for international security. Putin would be emboldened to repeat his nuclear ultimatums against new victims throughout the former Soviet Empire, while countries across the globe would soon scramble to protect themselves from this new reality by acquiring nuclear arsenals of their own. Decades of nuclear nonproliferation efforts would collapse and give way to a perilous new era of international instability.

Putin is not escalating from a position of strength. His fake referendums, absurd annexations, nuclear threats, and anti-Western rants all point to the fact that he is losing the war in Ukraine. This desperation makes him more dangerous than ever. The West must respond by demonstrating unwavering unity and resolve. This means tougher sanctions against Russia and accelerated military support for Ukraine. Today’s events make clear that Putin can no longer be reasoned with. He can only be defeated.