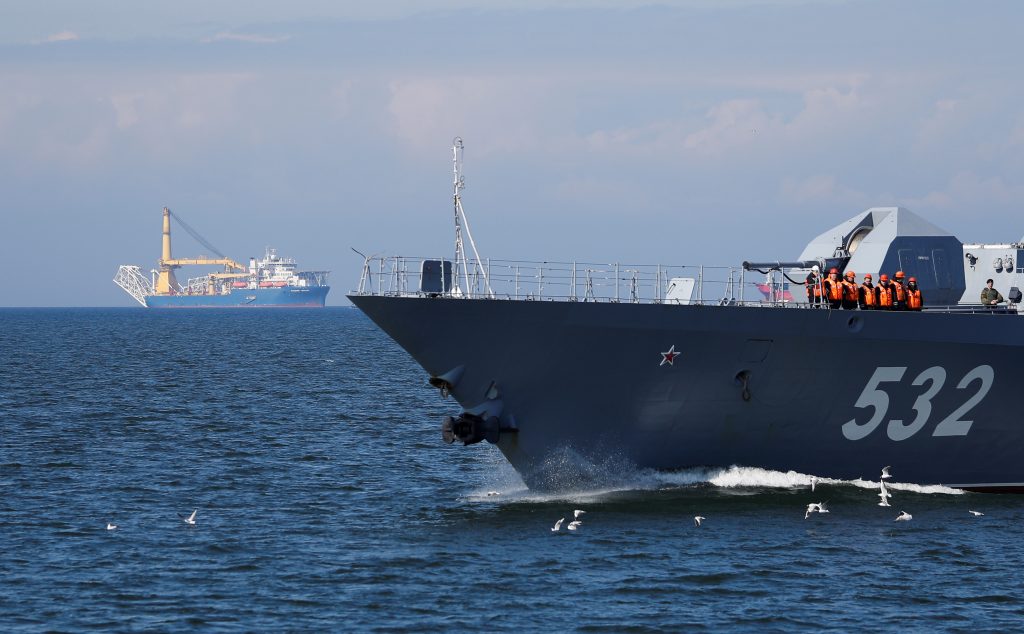 Vladimir Putin hasn’t given up on his grand strategy to dominate European gas markets. In order to accomplish this, Russia’s stalled undersea pipeline to Germany, Nord Stream 2, must be completed. Opposition has been fierce for years, but in December 2019 tough new US sanctions suddenly brought the multi-year and multi-billion dollar project to a halt with only 160 kilometers of underwater pipeline left unfinished.

Both the European Union and Washington had voiced longstanding objections to the project because it would allow Gazprom to control the European market and bypass gas delivery systems in Ukraine and Belarus, potentially undermining their sovereignty. But even after the Americans imposed sanctions late last year, Putin continued to double-down.

In March 2020, after the Nord Stream 2 contractor fled sanctions, Gazprom decided to deploy another, riskier type of pipe-laying vessel. It applied for a special permit from Denmark, which is the jurisdiction where the route remains unfinished. However, this request was given the cold shoulder by environmentalists as well as by European and American opponents of the project.

At the beginning of May, the Russians piled on the pressure when a second ship, the Gazprom-owned Akademik Cherskiy, arrived in the Baltic Sea from Asia with the clear intent of completing the undersea line. “The arrival of the Akademik Cherskiy suggests that the pipeline project remains a priority for Moscow despite US sanctions on Russia,” speculated Reuters.

But not so fast, Vladimir. In an interview on May 11, sanctions co-sponsor Senator Ted Cruz bluntly stated that American sanctions on the pipeline will apply to any ship or any owner who attempts to finish the infrastructure job. The intention was to permanently impede its completion.

“The sanctions on Nord Stream 2 were endorsed by the entire United States government and there is absolutely no wiggle room,” Cruz wrote in an email. “If Gazprom uses the Akademik Cherskiy to finish the Nord Stream 2 pipeline, the US President must and will impose sanctions on Gazprom. Their officers would lose their ability to come to the US and all of their assets would be blocked, and that’s just for starters.”

The significance of this cannot be overstated. Tens of billions of dollars, along with Putin’s reputation as a savvy geopolitical chess master, have been invested in the pipeline project. However, Moscow is now running out of viable options. The only move left is to proceed in defiance of sanctions that will adversely affect many in the higher echelons of the Russian establishment.

Further, the Senator’s office appended to his interview a statement from December that outlined the deterrents to any company that tries to build Putin’s energy weapon. “The consequences of your company continuing to do the work for even a single day after the President signs the sanctions legislation would expose your company to crushing and potentially fatal legal and economic sanctions.” reads the statement.

The sanctions stipulate that the US State Department, in consultation with the US Treasury Department, must report every six months to the US Congress on vessels engaged in pipe-laying for the Nord Stream 2 pipeline, while also providing a list of foreign companies or individuals who have sold, leased or provided those vessels or facilitated deceptive or structured transactions to provide those vessels.

For instance, should Gazprom deploy the Akademik Cherskiy to complete Nord Stream 2 in defiance of sanctions, Gazprom’s principal shareholders and corporate officers would be denied entry into the United States. The same penalties would apply to officials in charge of Russia’s Federal Agency for State Property Management which controls government shares in Gazprom and other state-owned enterprises. Likewise, those running Russian state entities Rosneftegaz and Rosgazifikatsiya, which are Gazprom’s “principal shareholders with a controlling interest”, will be caught in Washington’s sanctions dragnet.

Further, Gazprom would lose access to any property in the United States and be blocked from any of its property controlled by a US company or individual anywhere in the world.

This isn’t the first time Cruz has weighed in on the pipeline situation. In March 2020, when Gazprom, its backers and partners first requested a permit from Denmark that would allow a barge ship without dynamic positioning to complete the project, Cruz was equally unequivocal.

He said the goal was to permanently stop the pipeline and added that the proposed Russian environmental hazard was unacceptable. “Senator Cruz is deeply concerned about the environmental risks of continued Russian construction in the Baltic Sea, especially by anchor barges. The Baltic Sea is littered with unexploded munitions and chemicals, and the ships under consideration would pose a grave risk of full-blown environmental catastrophes. He has and will continue to urge America’s European partners to reject such risks.”

Besides this bombshell, Nord Stream 2 faces more bad news regarding its request for exemption from European Union rules on pipelines connecting the bloc with non-member states. These include requirements such as transparency and decoupling of ownership between owners and suppliers, neither of which Gazprom has agreed to abide by. German regulators are expected to reject the exemption request.

With the US refusing to soften its stance on Nord Stream 2, Putin’s pipeline ploy to gain added energy leverage over Europe looks to be in tatters. Meanwhile, the Russian economy is crashing under the combined weight of the COVID19 pandemic, collapsed global energy prices, and sanctions imposed for the war in Ukraine. Understandably, plans to make Putin president for life are currently on hold. And neither Ted Cruz nor Congress has had to fire a single shot.

Image: The pipe-laying vessel Akademik Cherskiy owned by Gazprom, which Russia may use to complete construction of the Nord Stream 2 pipeline, is seen in the distance as the Russian Navy corvette Boikiy sails in the foreground near the Baltic Sea port of Baltiysk, Kaliningrad region, Russia. May 3, 2020. REUTERS/Vitaly Nevar