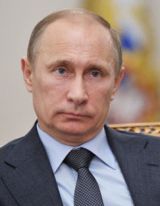 As President Vladimir Putin seems to be finalizing Russian suzerainty over Crimea, capitols in Europe and Washington are struggling to find ways to reverse this land grab.  Unfortunately, short of using force—a response no one considers sane—for the short term, the cupboard of options is relatively bare.  Canceling visas, boycotting the G-8 meeting in Sochi, expelling Russia from the G-8 and other sanctions are hardly pinpricks on Putin’s thick hide.  Of course, taking aim at Russia’s central bank and hastening a run on the ruble would hurt and have broader secondary and tertiary effects such as cramping business or forcing a cut-off of energy to the West.

If we were clever and even diabolical, Putin has certain vulnerabilities that could be exploited.  But first, we need to understand his strategy and what he hopes to achieve before taking any action.  In my  view, Putin is acting out of weakness at home amplified by Russian (not just Soviet) paranoia about being encircled by unfriendly powers.

Given Ukraine’s Siamese twin-like relationship with Russia over the centuries, the situation becomes more complicated.  Had Nikita Khrushchev not transferred Crimea to Ukraine in 1954, this would have been a non-issue.  But it is not.

Putin’s popularity at home was in decline.  The Sochi Olympics helped reverse that decline.  Now, the incursion into Crimea is rallying Russian support and rekindling Russian nationalism.  Putin is also winning the narrative war by inventing all manner of claims about Ukrainian fascism threatening ethnic Russian citizens there.  He no doubt is harnessing a major cyber-disinformation war to control communications and the Internet blocking unfavorable messaging while reinforcing his propaganda.

Reference has been made to Hitler’s seizing the Sudetenland in 1938 to protect German-speaking citizens.  But Putin has no intent of encroaching on NATO states.  Article V of the Washington Treaty of 1949 that guarantees an attack against one is an attack against all is a powerful deterrent.  For all the hype about Russian military prowess, were it not for its tactical nuclear weapons, its conventional forces would be overwhelmed by NATO much as Saddam Hussein was in the 1991 and 2003 wars.

What to do?  First, the West needs a narrative to counter Putin and indeed to discredit the incursion into Crimea. This must be subtle but powerful as was Ronald Reagan’s challenge to Mr. Gorbachev “to tear down this wall.”  “What next Mr. Putin?” is not a bad start.

Second, time is on our side.  Putin’s heavy-handed tactics will not go down well with Crimea’s minority populations especially the Tatars.  Reminding Mr. Putin of the Soviet Union’s unhappy intervention in Afghanistan in 1979 must be part of a counter-narrative.  Putin is rightfully paranoid about Islamic radicals.  Chechnya and  Dagestan are open wounds as far as Moscow is concerned.  An insurgency in Crimea will exacerbate those wounds and escalate the dangers to Russia. Continued reference to not making Crimea into another Afghanistan is essential.

Third, why not turn Putin’s cyber-information warfare against him?  Putin may be acting out of insecurity at home.  He has not delivered on modernizing Russia and building a future economy not entirely dependent on exports of fossil fuels. The tone of such a narrative campaign should not be hostile or overly aggressive.  Instead, it should be cast almost mournfully as if Putin was self-imploding and hence throwing away the opportunity for moving Russia forward and closer to the west.

The “big bazooka,” to quote former Treasury Secretary Henry Paulson, is targeting the Russian central bank and the hundred or so Russian oligarchs on whom Putin is dependent for support.  Life can be made rather difficult for both as the financial noose is exquisitely and deftly tightened.  Putin of course can retaliate with the energy weapon.  Fortunately, spring is coming to lessen demand and Russia needs the foreign capital.

Finally, Putin must be thanked for rejuvenating NATO and reinforcing its raison d’etre. Strengthening NATO by far is the best inoculation against further incursions by Putin.

What must be understood is that in the 21st century, military force is not the best leverage.  Indeed, as the U.S. learned in Iraq and Afghanistan and in the so-called war on terror, the finest military in the world is hard pressed to overcome adversaries that possess no armies, navies or air forces.  Because of globalization and the demise of many borders and boundaries, financial, informational and other tools can be the preferred weapons of choice.

If we are clever, and that remains a big if, Russian occupation need not be the start of a new cold war.  But we must be clever.  Brains will count far more than brawn.

Harlan Ullman is Chairman of the Killowen Group that advises leaders of government and business and a senior advisor at Washington D.C.’s Atlantic Council.  His latest book, due out this Fall, is A Handful of Bullets: How the Murder of an Archduke a Century Ago Still Menaces Peace Today.