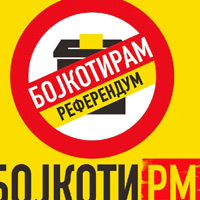 Ahead of Macedonia’s naming referendum on September 30, the boycott proponents attempted to both use and disparage similar nationalist sentiment in the United States.

A failed referendum would complicate the country’s integration into the Euro-Atlantic community for the foreseeable future. Namely, Greece is adamant the country’s name has to change to lift their veto on Macedonia’s NATO and European Union membership. The agreed name containing the word “North” is a compromise reached between the two countries on June 17, 2018 (so called Prespa Agreement).