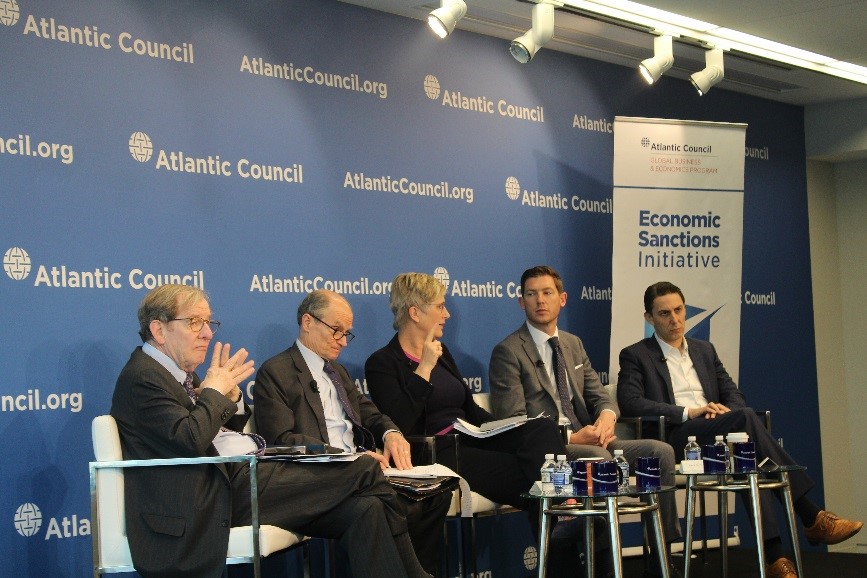 On April 17, the Atlantic Council’s Global Energy Center and Global Business & Economics Program hosted an event on the implications of Russia sanctions legislation on the energy sector. Moderated by Amb. Richard Morningstar, the Atlantic Council Global Energy Center’s founding chairman, the event featured a timely and informative discussion on the status and substance of the latest US Russia sanctions legislation, how companies mitigate risks incurred by present and future US Russia sanctions legislation, and the effect of sanctions on US-European Union (EU) relations, and transatlantic cooperation more broadly. The conversation focused on two newly reintroduced bills in the US Congress: The Defending American Security from Kremlin Aggression Act (DASKAA) and the Defending Elections from Threats by Establishing Redlines Act (DETER Act.).

Amb. Morningstar began the conversation by delivering opening remarks, emphasizing the uncertainty posed by US sanctions legislation and their potential risks to companies and US partners. He then introduced the speakers and delved into opening questions.

First to speak was Amb. Daniel Fried, distinguished fellow with both the Atlantic Council’s Future Europe Initiative and the Eurasia Center, who provided an overview of DASKAA and the DETER Act. Citing problematic elements in both bills, Amb. Fried urged Congress to consult and cooperate with the EU on proposed legislation before it is passed. He underscored the fact that existing language in the re-proposed DASKA bill is weak and should include flexible language necessary for exercising discretion on a country-to-country basis. Moreover, he argued the proposed sanctions lack a clear purpose: the US “can’t use contingency sanctions for more than one contingency,” said Fried. He called the odds of the proposed legislation passing “better than usual.” Next, Amb. Fried commented on the “deliberate uncertainty” concerning Nord Stream II sanctions, saying the opening has allowed the EU energy package to move along and water down Gazprom’s hold over European gas markets. He urged the US to strategically use this window to collaborate with the EU, before mandatory sanctions are instituted on Nord Stream II.

Caroline Vicini, deputy head of the delegation of the European Union to the US, then spoke on the impact of sanctions on US-EU Relations, noting US sanctions legislation places the EU in a difficult position: the EU wants to continue cooperation with the US, but it will not bear the brunt of US internal politics playing out in Congress. She urged the US to “go back to the basics” by recognizing the importance of transatlantic unity and the solidarity of the EU on combatting Russian malign behavior.

Up next, Amos Hochstein, senior vice president for marketing at Tellurian, Inc., voiced his concerns with US Russia sanctions, positing that the US defaults to sanctions as a tool of first resort, decreasing their effectiveness as a diplomatic tool. Instead, Hochstein argued, sanctions should be approached with a specific goal in mind and must be regularly evaluated using tangible metrics. Hochstein challenged Amb. Fried’s earlier statement on US-EU cooperation, arguing the proposed legislation cannot force cooperation; both sides must want to cooperate for sanctions to be effective. Regarding Nord Stream II, Hochstein contended the EU cannot help Ukraine while at the same time allowing for Nord Stream II’s construction: doing so eliminates critical Ukrainian transit fees and leaves the country susceptible to a gas supply cutoff. The answer to Ukraine’s national security threat, said Hochstein, is a contract between Naftogaz and Gazprom establishing a legal method for collecting on awards.

Amb. Morningstar’s questions concluded with Atlantic Council Global Energy Center Senior Fellow and Partner and Chair for the Global Trade and Investment Group at Willkie Farr & Gallagher LLP David Mortlock, who provided the private sector’s perspective on proposed Russia sanctions legislation. Mortlock spoke to companies’ inability to mitigate risk and uncertainty created by US sanctions legislation, asserting companies need to better understand “the certainty of the threat” posed by potential US discretionary sanctions. Mortlock attributed the level of uncertainty in the private sector to final legislation passed in Congress often failing to resemble earlier versions of proposed legislation. Companies are then required to wait for further guidance from the government before they can act to mitigate risk.

Questions from the audience prompted further discussion on the influence of proposed Russia sanctions on US policy in Venezuela, US involvement in European energy markets, and the future of Ukrainian reforms in light of its upcoming presidential elections.

To view the event, watch the webcast here.