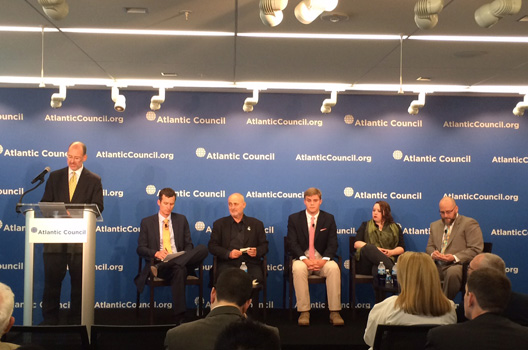 Predictions of the future are often one sided, based on past data and assumptions of future conditions. But at the intersection of creativity and interest, the Atlantic Council’s Art of Future Warfare project creates a revolutionary forum to discuss what conflict may look like years from now. In a series of contests, each directed toward a different creative medium, the project strives to create an alternative dialogue. In the second war-art challenge, participants were asked to write a creative short story around space and interstellar conflict at the end of the 21st century. Following the selection of a winner, the Atlantic Council hosted a panel to discuss the themes explored in the winning selection as well as prospects of space conflict.

The general themes of the conversation were as follows.

Conflict in space requires a completely different approach to normal warring practices. The quantitative differences of space from Earth will require a rethinking of military and strategic capabilities. Because of the time needed to traverse space, panelist Jason Batt commented that there will be “a separation between here and there.” The separation from Earth makes the support system for the troops more challenging and the logistics very difficult. Batt also mentioned that the distance and slowness of the news of the fight might cause a “detachment” between the general public and space warriors. However, Medén argued that the detachment of distance and time would not remove the emotional cost of war from actors on Earth.

The possibilities of space are immense but so are the challenges. Space presents the opportunity for exploration and new endeavors, like geoengineering, according to David Brin. The panel was quick to point out the various regulation problems that would come from the ability to mine asteroids, such as privateering. In addition, the high risk, high reward aspect of space was addressed by Jaym Gates, who remarked that to achieve space capabilities, there must be a level of “acceptable failure,” as the margin for error is nonexistent in the unforgiving environment of space.

The notion of sovereignty and citizenship may change in the future. Medén’s piece contains a nonstate actor group called “The Sovereigns.” This group is an entirely digital state-like entity with a large GDP and paramilitary capabilities. Medén, during the panel, referred to the creation of a “post locational society” with the advancement of technology and information. Medén also envisioned a nation defined by the interest of its citizens rather than the location of the person’s birth. In other words, people will identify more with what they like more so than where they are from. The current definition of nationality could be altered in the future as communication becomes simpler and identities shift.

Science fiction presents an excellent forum for women in combat. All four of the finalists’ in the Great War Challenge had female protagonists, a point that led to the discussion of the role of women in combat. Panelist Jaym Gates expressed that the greatest challenge facing women in the military is opinion, both of the general public and those within the military structure. Yet there are various positive abilities women can provide which would add to the military’s capabilities and strength. Brin added that Sci-fi presents a noble expectation in which women have overcome the challenges they currently face in military—and general–society.