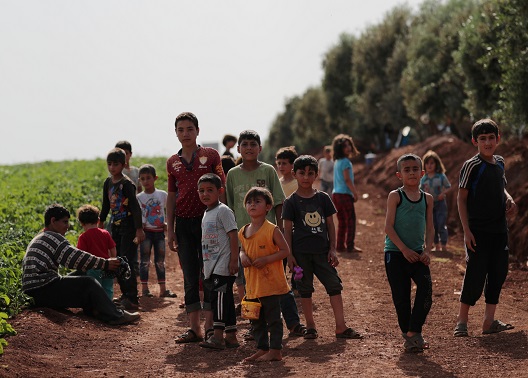 In Idlib, Syria, where villages are being razed and hospitals mercilessly targeted by Syrian and Russian forces, children who have been displaced several times over are showing signs of severe psychosocial distress, crying and screaming as they watch their world once again collapse before their eyes. To the northeast, the al-Hol camp houses 43,500 children under the age of twelve, 480 of them unaccompanied. After being born into extreme violence and trauma under the rule of the Islamic State (ISIS), the children now lack regular access to the most basic healthcare and education, and they continue to fester in sordid conditions as their home countries decide whether to take them in.

In the northwestern Sinjar region, children born as a result of ISIS’ systematic rape of Yezidi women have been declared unwelcome in the community by religious decree. To the south, in the Rukban camp close to the Jordanian border, 27,000 displaced Syrians, many of them children, are hungry, sick, and cut off from the world around them. Meanwhile, thousands of children in Arsal, Lebanon have begun losing their homes as the Lebanese government implements a military decree demanding the demolition of concrete structures more than one meter (3. 3 feet) high in order to avoid creating permanent refugee communities and repeating the Palestinian experience in Lebanon.

In an ugly war that has torn apart a country and destabilized an entire region, the ravaged childhoods and uncertain futures of innocent children are perhaps the most devastating consequences. But unlike other outcomes of the war, this one can be mitigated—if the international community can muster the political will to act.

The war in Syria has resulted in one of the largest humanitarian crises of our time. The 2019 figures are staggering: 5.6 million registered refugees; 6.2 million people displaced internally; 700,00 children out of school in the region. Massive waves of displacement have accompanied the indiscriminate barrel bombs, torture, rape, mass execution and chemical attacks that stole the lives of children as they slept.

These unspeakable horrors are too much for anyone to withstand, let alone a child who has not yet developed the resilience mechanisms necessary to weather the trauma of war. “When you are five or six and find yourself out on the street, you carry such memories forever,” Joelle Bassoul, spokesperson for Save the Children Middle East told me. Unlike the adults, children affected by the war will largely be the ones to shape the future of their country. By depriving them of the chance to develop, learn and grow in a safe environment, we are also depriving an entire nation of the chance to piece itself back together long after the Assad regime is gone. “It’s not fair,” a sixteen-year old Syrian boy told me in the Zaatari refugee camp inside Jordan in 2015, when I asked him what he wanted to transmit to a western audience. “You expect us to go back and rebuild the country, but you’re not giving us any of the tools we will need.”

While there are myriad challenges facing children affected by the Syria conflict, most are preventable or reversible if all stakeholder countries can summon the political will to do their part.

In Lebanon, while initially welcoming, government officials have found it politically expedient to use Syrians as scapegoats for their own shortcomings; blaming everything on them from the sagging economy to crime. The Lebanese government’s recent actions, however, have veered on outright intimidation, forcing refugees back into Syria despite the dangers that often await them. The Lebanese government should dial back hostile rhetoric against Syrian refugees and refrain from trying to force refugees, especially those with young children, to return to Syria prematurely and under duress. Failure to do so risks exacerbating the very problems they claim the refugees are causing; namely, deepening divisions between Syrian and Lebanese residents, risking regular attacks between the two and enabling the radicalization of both populations, leading to a vicious cycle of dehumanization and hate.

In Rukban, the governments of Russia, Jordan, and the US are uniquely placed to make life slightly more bearable for those living inside the camp. The Assad regime clearly bears the most responsibility by not allowing a safe return of the IDPs to their original homes, while also not allowing humanitarian assistance to reach the camp. Russia is equally culpable as it refuses to press the Syrians to change their stance. The United States, which has forces stationed at the nearby al-Tanf base, has thus far chosen not to get involved or help humanitarian assistance reach the camp.

The Jordanians, who host over a million displaced Syrians, previously allowed assistance into the camp, but closed the border after a pre-meditated terrorist attack killed six Jordanian soldiers and wounded fourteen. But by not allowing assistance to reach the camp from its territory, Jordan, like the US and Russia, is only contributing to the agony of the refugees while they wait for a more sustainable solution. It should therefore allow assistance to reach the camp, to include psychosocial support for Rukban’s children, until a political solution is reached with the regime.

In al-Hol, the lack of accountability by Western nations towards their citizens detained there is deeply problematic. The Syrian Democratic Forces (SDF), currently responsible for the involuntary detainment of individuals at al-Hol, are vocal in requesting that Western countries take back their citizens or come up with a plan for how to deal with them. As it stands, the SDF has neither the legal mandate nor the physical capacity to continue holding people in SDF-held territory.

A recent Swedish proposal to convene an international tribunal in Syria is gaining ground, but the road to a tribunal will be fraught with complications and does not address the immediate needs of the camp’s traumatized children. An EU fact-finding mission should be deployed to al-Hol as soon as possible to speak with camp administrators about the children’s long-term needs and how to address them. This should include the repatriation of European children to their, or their parents’, home countries.

Finally, all countries must increase their resettlement numbers, especially for Syria’s youngest and most vulnerable victims. In Syria alone, UNICEF estimates that there are close to 48,000 children whose parents belonged to ISIS, including 2,500 apparently stateless foreign children. Those that have had access to the camps have described the conditions as decrepit and life-threatening. Most foreign assistance is limited to basic life-saving sustenance, with little to no resources earmarked for addressing the potential for radicalization among camp residents. Left to fester in the camps, there is a high chance that those who harbor extremist views will find ample opportunity to spread their ideology among vulnerable children, creating a vicious cycle where the longer governments ignore them, the more difficult it will be to reintegrate them into their respective countries.

Despite all this, and partly due to intense domestic political pressure, countries in the West have consistently under-delivered on their resettlement commitments. This needs to change, starting with orphans, particularly those with families in Europe willing to take them in.

The international community cannot continue to abdicate its responsibilities towards the young victims of the war. Syria’s lost generation can still be saved.

Jasmine M. El-Gamal is a Senior Fellow at the Atlantic Council and former Middle East Advisor at the U.S. Department of Defense, where she covered issues related to Syria, ISIS and the U.S. response to the Arab Spring. She is the author of, “The Displacement Dilemma: Should Europe Help Syrian Refugees Return Home?”

Image: Displaced Syrian children from the al-Ahmed family stand in an olive grove in the town of Atmeh, Idlib province, Syria, May 16, 2019. REUTERS/Khalil Ashawi