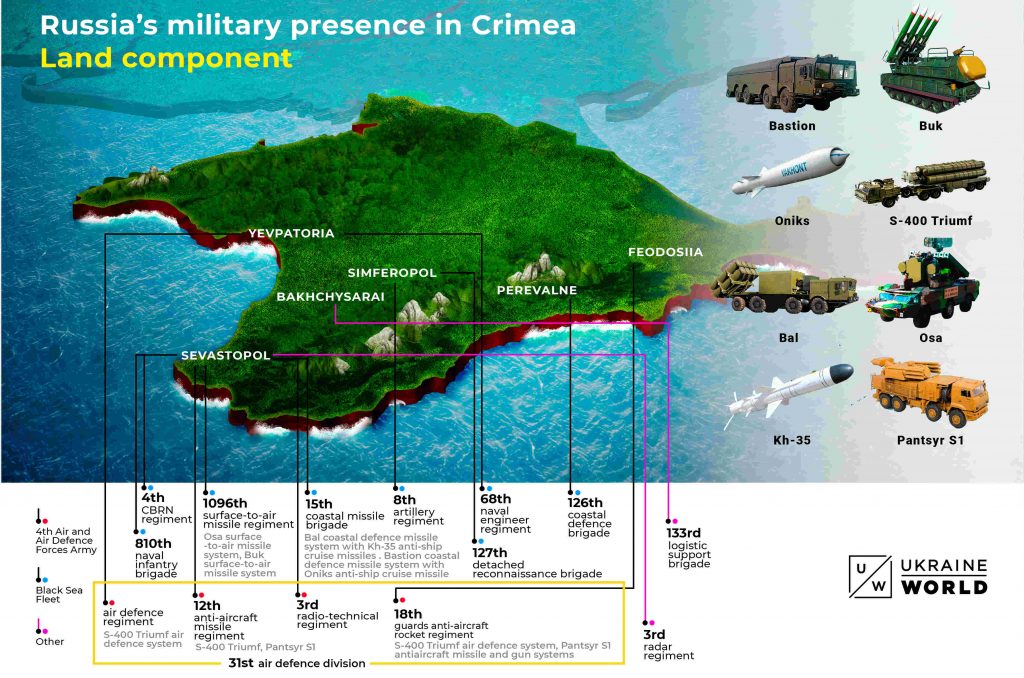 Since illegally annexing Crimea in 2014, Russia has drastically increased its military presence in the Black Sea region. The Kremlin’s dominance may be temporary given NATO’s greater capacities, but so far, NATO’s response has been limited.

“Russia has practically covered all of the Black Sea region,” says Hryhorii Perepelytsia, the head of the Kyiv-based Foreign Policy Research Institute. “It can destroy targets—for instance, NATO ships—right at the entrance via the straits of Bosporus and Dardanelles.”

The Kremlin has consistently upgraded its military capabilities over the past five years. It increased its military personnel from 12,500 before illegally seizing Crimea to 32,000 in 2018, aiming to reach 43,000 by 2025, and it updated and extended its military bases. Additionally, Russia has been creating an anti-access/area denial (A2/AD) zone over the Black Sea that will allow the Kremlin to deny other countries’ access and free movement in the region.

The A2/AD zone includes several elements. Crimea hosts Russia’s Bastion and Bal coastal defense systems with anti-ship missiles; the Bastion system can reach ships in the Black Sea straits, as well as in Ukrainian, Romanian, Bulgarian, and Turkish ports. Russian air defense is beefed up by the S-400 Triumf air defense system, which is protected by the Pantsyr S1 anti-aircraft missile and gun systems.

Additionally, Tu-22M3 Backfire bombers, with cruise missiles, can cover all of Western Europe. And three frigates and six submarines carry Kalibr cruise missiles that can cover part of Europe, Central Asia, and the Middle East; they can easily reach Istanbul or Vienna, as well as the south of Italy, Iran, Iraq, Syria, and Egypt. Stationed on ships and submarines, these cruise missiles don’t violate the US-Russia Intermediate-Range Nuclear Forces Treaty, which doesn’t cover sea-launched missiles.

An integral part of A2/AD is electronic warfare. Russia has a radar regiment in Sevastopol. Additionally, it has deployed the Murmansk-BN coastal complex which, according to the Kremlin-controlled media, can monitor all NATO ships in the Mediterranean.

But Russia isn’t rushing the completion of the A2/AD system, given the weak NATO presence in the area, according to Sergey Sukhankin, a fellow at the Jamestown Foundation. Currently, it lacks the ability to launch a pre-emptive strike without a permanent deployment of Iskander complexes.

Nonethless, all of these forces allow Russia to control the region militarily. The principal target seems to be Ukraine—and Russia seems determined to demonstrate that Western forces would face military challenges if they supported Kyiv.

Already, the Kremlin is putting psychological pressure on NATO. Its Su fighters often fly close to NATO countries’s ships at low altitude, imitating an air attack. This behavior is dangerous.

Another potential threat is nuclear. There is no evidence of the presence of nuclear capacities in Crimea, but Russia is updating a facility in Feodosiia-13 that housed nuclear bombs prior to 1994.

Some weapons in Crimea are capable of carrying nuclear warheads. They form a trio that can attack from the sky (the Tu-22M3 bomber), land (the Bastion coastal defense system), and water (Kalibr missiles on frigates and submarines).

Meanwhile, Russians store nuclear weapons near Novorossiysk, next to the peninsula. “It [would not be] a problem to go to Novorossiysk, fit a missile with nuclear warheads, and come back to Sevastopol. Although Russians say that it’s impossible, I think that they are constantly working on this issue,” says Mykhailo Samus, deputy director at the Kyiv-based Center for Army, Conversion, and Disarmament Studies.

There is no agreement between Black Sea NATO states on how to respond to Russia’s dominance in the region. Romania wants to establish a permanent flotilla with Bulgaria and Turkey, but Bulgaria considers this move overly provocative, warning that it would create additional security threats.

NATO has limited options. The 1936 Montreux Convention restricts the tonnage of warships of non-Black Sea states in the sea, and they are permitted to stay no longer than twenty-one days. Therefore, the United States, Britain, France, and other NATO countries must rotate their warship presence there.

Nevertheless, NATO can deploy to the region much larger forces that would outmatch the Kremlin’s capacities. “If you brought all of NATO, US forces to bear on a particular region, Russia would be outmatched. But that would take some time since NATO forces are spread throughout,” says Ian Williams, associate director of the Washington-based CSIS Missile Defense Project.

Samus recommends establishing a common command and control center to coordinate the actions of NATO’s rotating ships in the Black Sea.

Military control of the Black Sea region is important for Russia, giving it access to the Balkans and the Mediterranean Sea. The latter is crucial for its military involvement in the Syrian conflict. Among other things, ships of the Black Sea Fleet have fired Kalibr missiles at targets in Syria; additionally, Russia supplied Bastion systems from Crimea to Syria.

But the military buildup means that Russia still feels insecure about its de facto sovereignty over the peninsula. “Most of the world still recognizes it as part of Ukraine. By militarizing it, they demonstrate that possession is nine-tenths of the law. And nothing says ‘it’s mine’ as much as tanks, ships, and air defenses,” Williams says.

Russia is also trying to establish control over the neighboring Sea of Azov to fully dominate the region. In April 2018, the Kremlin increased the number of spurious inspections and detentions of commercial vessels heading to or from Ukrainian ports. Earlier this year, the Kremlin redeployed at least ten warships and up to forty patrol boats from the Caspian Sea. In response, Ukraine decided to build a naval base and deployed to Berdiansk two small armored artillery boats.

Russia has clearly demonstrated its desire to dominate the Black Sea region. It provokes and checks limits. At the same time, it depends on revenues from gas and oil supplies to Europe. Russian tycoons own property and educate their children in the West. The Kremlin has its own limits too.