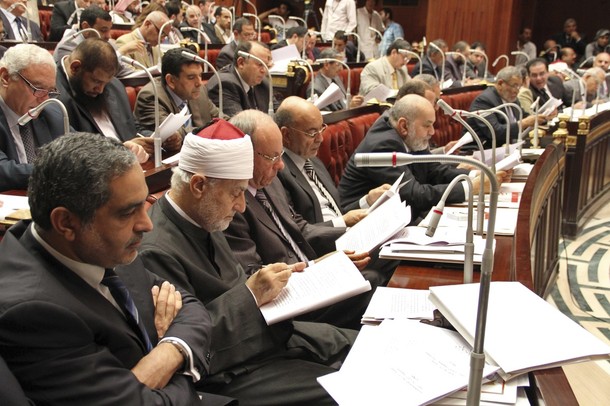 The formation of the Constituent Assembly tasked with drafting the constitution of post-revolution Egypt has been described using largely the same terms used to depict the first transitional period from February 2011 to August 12th of this year: haphazard, confusing and ambiguous.  This state of confusion has reigned since the election of members of the first Assembly, fraught with withdrawals and divisions, to its nullification by virtue of a judicial ruling, and continuing onwards with the second Assembly’s work shackled by repeated calls its disbanding and reformation, and a pending case before the Administrative Court which threatens to put an end to all of the Assembly’s work.

Setting aside talk of the selection method used to choose the Assembly members, as well of the members themselves, we find that the established Constituent Assembly has already completed a large portion of its work and is on the verge of presenting a draft to the public. It is this draft which deserves close monitoring, especially the new system of government, because in the event that it does see the light of day, it will live on with us for years and perhaps decades.

Politicians and specialists often criticized the system of government laid out in the now defunct 1971 Egyptian constitution. This was due to confusion surrounding the categorization of that system; it being neither presidential, nor parliamentary, nor mixed in nature.  In reality, it was a tyrannical system, since it placed all authority in presidential office, with no other entity capable of checking its power. This is the first criterion by which to judge whether or not the new draft constitution offers real change.

The "consensus" among Egypt’s politicians is to implement a mixed presidential-parliamentary system of government. Justifying this choice, it was said that neither system, whether parliamentary or presidential, would comport with Egypt’s political climate in view of the fact that it is emerging from decades of political rigor mortis.  Moreover, this period was characterized by a lack of substantive political parties and a non-existent legislative process.

Based on that, The Constituent Assembly embraced this view and settled on implementing a mixed system of government. The executive branch will be divided into two offices: the office of the president and the office of the prime minister, and, of course, greater authority will be vested in the former. In an attempt to remedy the abnormal situation which existed previously, the Assembly has curbed the powers of the president and in turn granted more powers to the prime minister. This was done with the aim of balancing the two offices of the executive branch and to curtail the powers of the president of the republic. Lastly, the Constituent Assembly chose to retain the provision that the prime minister is appointed by the president. To date, there is nothing essentially new about the draft constitution’s system of government when compared to its predecessor, which in turn makes the consensus among politicians and the Assembly members surprising.

The crux of that defective system (present in Egypt since 1952 and likely to continue into the future) lay in that the president seized all executive authority, did not share power (with either the cabinet or the parliament) and was answerable to no one. This means that the concentration of power in the hands of the president, which paralyzed political life in Egypt, will continue.

Egypt is in need of a political system that unequivocally delineates the prerogative and accountability of each power. This must be done while ensuring that power is shared so that no one branch monopolizes it. The political system best suited for Egypt, so as to enact the profound change hoped for after the popular revolution, is a presidential system in which the head of state is popularly elected and is fully accountable for the executive branch as a whole. In addition, the powers of the head of state must be in balance with and parallel to a true parliament that represents popular sovereignty and the second branch of governing.

Some feel that the weakness inherent in Egypt’s political parties would render this system nothing more than a shadow parliament incapable of rivaling the president. Despite the fact that, however; Egypt’s political parties are still in their formative stages, building a strong parliament does not depend solely on these parties. It also depends on a political will, united in its mission to create a strong, independent parliament that possesses the mechanisms necessary to participate in governance. This political will should be clearly expressed in the text of the new constitution. If this were to happen, the political parties would strive to strengthen themselves and fulfill their role, because an established and coherent political system would strongly incentivize political engagement in the community, eventually leading to a sound political process. In addition to that and regardless of the type of political system implemented, a strong parliament is paramount as true political order is not possible in its absence.