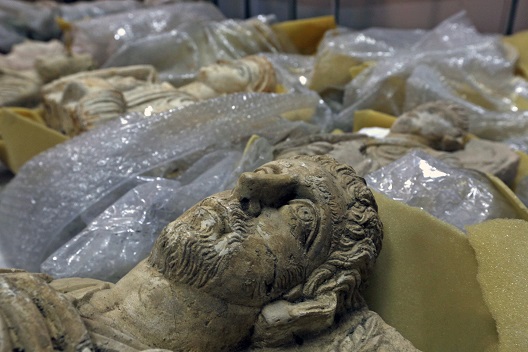 Photo: Antiquities are unwrapped as thousands of priceless antiques from across war-ravaged Syria are gathered in the capital to be stored safely away from the hands of Islamic State militants and the ongoing war across most of the country, in Damascus, Syria August 18, 2015. Syria is a cultural treasure trove and home to six UNESCO World Heritage sites. Four of these sites, including Palmyra and the Crusader castle Crac des Chevaliers, have been used for military purposes, the United Nations says. REUTERS/Omar Sanadiki

The hazy question of ownership lies at the core of the trade and destruction of Middle Eastern artifacts. As the Syrian civil war becomes increasingly complex, familiar questions call out for an answer: who owns a country’s antiquities and what can be done to protect them in times of unrest?

On January 2, 1912, an aristocratic Manhattanite by the name of Mrs. Henry Draper purchased an Egyptian necklace of green glazed amulets found at Tell al-Amarna in Egypt from a Lebanese antiquities dealer, Aziz Khayat. She paid $30. The records of Mrs. Draper – including correspondence with Khayat, who had a boutique at 366 5th Avenue – remain in the heart of the New York Public Library. Such records testify to a range of antiquities dealers undertaking illegal excavations as the Ottoman Empire was collapsing and giving way to the modern Middle East. Other items came from as far as Japan and Mrs. Draper even lent an amulet with Babylonian inscriptions to Columbia oriental studies professor Richard Gottheil in order to check its authenticity. As World War I broke out in 1914, one boutique run by two Lebanese brothers printed a guide to antiquities from the now-troubled governorates of Raqqa and Deir Ezzor, with encouragements to New York collectors to buy Syrian items as quickly as possible before the disruption of the war put a stop to their trade.

The story of one genteel New York lady’s purchase of smuggled antiquities should not be seen to have any parallels with the brutality of the destruction of antiquities we have seen in the past year. Indeed some may argue, no doubt with a deal of justification, that it is better to sell antiquities than to blow them up. Instead, the core point of this story is to relate the proximity of the antiquities question to the shared Western and Islamic narrative. And though times and places have changed – for Manhattan we can substitute Qatar – the long history of the exploitation of Syrian antiquities should alert us to the need to take an equally long-term approach toward their protection.

Over the past century, debate has raged over “who owns antiquity,” as noted curator James Cuno put it in 2008. Cuno suggested that established, mostly Western, museums could ensure the safety of antiquities. This approach has often been echoed, if not elucidated, in popular commentary following tragedies such as the blasting of the Bamiyan Buddhas, the 2003 looting of the Baghdad Museum and the latest ISIS raids on Palmyra. Others have discussed the close links between imperialism and control over the consideration and consumption of the ancient past. Scholars of the imperial and modern Middle East such as Neil Silberman, Zainab Bahrani, Magnus Bernhardsson and Lawrence Gilot have noted that the manipulation of the ancient past, by colonial and postcolonial powers alike, has inflamed popular alienation from the non-Islamic past. Regardless of these academic disputes, it is clear that at this juncture there needs to be a coordinated public–private effort at legally binding protection.

It is heartening to note that several governments have ramped up scrutiny of the Iraqi and Syrian antiquities trade. The European Union led the way with the passage of Council Regulation N. 36 in 2012. The U.K. transposed this regulation into British law as the Export Control (Syria Sanctions)Order in 2013, which specifically targeted the transfer of Syrian cultural heritage. As a result of the quirks of its onerous legislative process, Syria’s former imperial overseer France delayed until September 2015 to transpose the law. Australia’s Senate has also passed a law directly targeting the illicit trade of antiquities from the Fertile Crescent, while U.N. Security Council Resolution 2199 (2015)is a welcome worldwide denunciation of ISIS’s mindlessness. The Arab League should follow up on the U.N.’s and the West’s lead in restricting illegal transfer of Syrian and Iraqi objects.

Institutional actors are also participating in efforts to prevent illicit trade. The British Museum’sannouncement that it would protect an unlawfully traded Syrian artifact until the end of the civil war should be seen as welcome news rather than skeptically interpreted as a return to the hoarding practices of old. Under its energetic director, UNESCO has launched several conferences bringing public and private actors together. One such conference, held at the Metropolitan Museum, was attended by a range of officials representing agencies including DHS, State and the FBI. It could be interpreted as a sign of the administration’s intent to seem to be doing something about the issue while bills languish in Congress having been beforeSenate and Representatives’ committees since last March.

This lack of action by the U.S. comes despite growing concerns over U.S. importation of Syrian items, as reported by cultural heritage attorney Rick St. Hilaire. St. Hilaire points to a growth in the exportation of Syrian manufactured antiquities to New York, a city renowned in the trade. On the other hand, Peter K. Tompa has noted the possibility that Syrian objects counted as a Syrian export by U.S. customs may have been legally imported from third countries that have nothing to do with the current crisis. Nevertheless, Tompa’s suggestion that St. Hilaire is biased toward the antiquities protection lobby is not helped in light of his own employment by alobbying firm in Washington. The close-knit and opaque antiquities community is underlined when one considers Tompa’s authorship of an article in a book, Who Owns the Past, edited by Kate Fitz Gibbon, a board member of the Committee for Cultural Policy, an NGO that wants to “bring U.S. cultural policy back to a reasonable middle ground,” and away from what it perceives as aggressive regulation.

Civil society could be mobilized to examine, debate and maintain pressure on this issue. Independent specialists, such as Mark Altaweel in London, should be given the opportunity and resources to scrutinize private trade and institutional activity. A Financial Times articleencouraging its readers to be aware of buying illicit antiquities is still a step in the right direction in raising general awareness of the problem. Although young people may have less of an interest in antiquities, there might be ways to increase the social media appeal of this cause. The UNESCO website is a good place to start. Al-Fanaronline reports that modest restoration efforts in Syria have been initiated by dedicated young students facing incredible challenges. The first place to get involved is with your local Blue Shield campaign. Further information on organizations acting for Syria’s antiquities can be found here as well as a detailed report on the current situation. If we are to have a chance of changing the future of Syria’s past we will need to get informed and organized.

Idir Ouahes is a Ph.D. Candidate at the University of Exeter. His thesis, to be completed this year, Method of the Mandate, includes a chapter on France’s organization of an antiquities service in the early 1920s as it took over Syria and Lebanon.