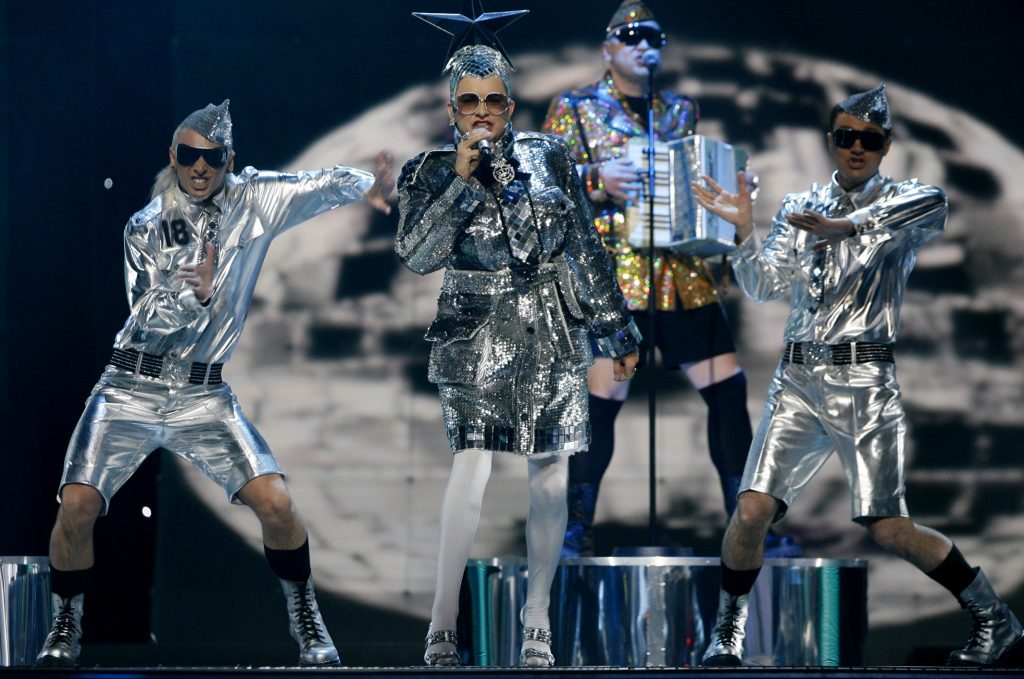 Anyone who feels that Eurovision has become too politicized need look no further than Ukraine for confirmation. Nobody takes the song contest quite as seriously as the Ukrainians, who treat it as an extension of foreign policy complete with furious nationwide debates and heavy-handed government interventions. The latest scandal, which has seen the winner of the national competition deselected following outcry over her decision to continue performing in Russia despite the state of undeclared war between the two countries, is entirely in keeping with the exaggerated political importance attached to Ukraine’s annual participation. Indeed, for students of modern Ukrainian history, the country’s yearly Eurovision soap opera serves an entertaining guide to Ukraine’s broader post-Soviet progress.

For the first ten years of independence, Ukraine did not participate in Eurovision. This absence mirrored the country’s international anonymity during a lost decade which saw Ukraine mired in domestic dysfunction and firmly entrenched in Russia’s shadow. Ukraine’s Eurovision odyssey began in spring 2004 when Ruslana’s “Wild Dances” won the song contest in what was only the country’s second appearance. Outside of the sporting arena, this was Ukraine’s first significant international success since independence and its impact on Ukrainian society was disproportionately large. It is no exaggeration to say that Ruslana’s victory helped fuel the rumblings of a national awakening that would erupt months later with the Orange Revolution. Her folksy ethno-anthem chimed perfectly with the zeitgeist of the period and resonated among a generation of Ukrainians starved of reasons for patriotic positivity.

If Ruslana’s victory was a cultural landmark in Ukraine’s nation-building journey, the Ukrainian Eurovision entry three years later represented a bold declaration of the country’s European credentials. Cabaret drag act Verka Serduchka’s glorious 2007 effort was quite simply peak Eurovision. Everything from the artist’s human disco ball costume and playfully political chorus of “Russia Goodbye” to the song’s infectious Eurotrash beat and nonsense mishmash of English and German lyrics made for the quintessential Eurovision performance. It showcased the rising self-assurance of post-Orange Ukraine as a nation with the confidence to laugh at itself and the savvy to appreciate the kitsch ethos that defines Eurovision. Verka was ultimately beaten into second place by Serbia following an avalanche of incestuous Balkan block voting, but Ukraine’s entry has since come to be recognized as the best song never to win the contest. Sadly, it was also to prove the country’s first and last attempt at light-hearted Eurovision humor.

Ukraine continued to take Eurovision far too seriously throughout the late 2000s and early 2010s, maintaining its budding song contest superpower status by finishing second again in 2008 before claiming third in 2013. By now, the annual selection process had evolved into one of the highlights on the Ukrainian showbiz calendar, attracting the biggest star names and generating months of headlines as the nation subjected each candidate to the kind of po-faced scrutiny more typically reserved for key ministerial appointments.

The Russian seizure of Crimea and invasion of eastern Ukraine then brought the country’s Eurovision bandwagon to an abrupt halt, with the authorities deciding in early 2015 not to enter that year’s song contest. With Ukraine’s continued existence as an independent state hanging in the balance, few had time to dwell on this temporary withdrawal. Nevertheless, for the Eurovision-loving Ukrainian public, it served to underline the gravity of the crisis.

Ukraine returned to Eurovision in 2016 as a battle-hardened nation intent on weaponizing the contest to refocus international attention on Russian aggression. The result was arguably the most political Eurovision entry of all time. The song in question officially addressed the WWII-era Soviet deportation of the Crimean Tatars, but few were under any illusions that the real subject matter was the contemporary Russian occupation of Crimea and Putin’s ongoing hybrid war against Ukraine. A lesser artist might have crumbled under the weight of such lofty geopolitical ambitions, but Crimean Tatar diva Jamala rose to the occasion and gave the performance of a lifetime to secure Ukraine’s second Eurovision win. Jamala’s achievement was a masterpiece of cultural diplomacy that succeeded in thrusting the Ukraine conflict back into the international spotlight. Not everyone was impressed, however. Many commentators accused Ukraine of hijacking Eurovision and bemoaned the politicization of an event originally conceived to bring Europeans closer together.

The debacle of Ukraine’s 2019 Eurovision selection process suggests we are no nearer to leaving the politics behind. This is a shame. The song contest has played a useful part in Ukraine’s wider struggle to assert its European identity, but all too often this has resulted in a misplaced reverence that leaves the country out of tune with the rest of the continent. Ultimately, there is nothing more European than treating the annual song contest as a bit of a joke. When Ukrainians finally learn to regard Eurovision as an apolitical exercise in sheer silliness, we will know that Ukraine has truly come of age as a European nation.

Image: Ukraine's Verka Serduchka performs the song "Dancing Lasha Tumbai" during a dress rehearsal for the finals of the Eurovision Song Contest in Helsinki May 11, 2007. The finals of the song contest will be held May 12. REUTERS/Bob Strong (FINLAND)