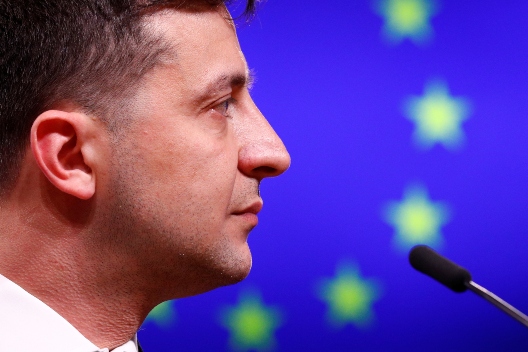 It would be unfair to expect Ukraine’s novice president to take over the reins of Europe’s largest country seamlessly. However, knowing how to spell his own name in English would seem a more realistic expectation. This did not appear to be the case during the first days of his administration, or at least that was the impression created by the range of different spellings used in various government communiques and official social media accounts. This sparked a lively debate among English-language journalists and commentators covering Ukraine, with some favoring the succinct “Zelensky,” while others argued the case for the more puritan “Zelenskyi” (For the record, this author championed “Zelenskiy,” which is how the Atlantic Council has rendered his name until now). Clarity came suddenly in late May, when the presidential administration confounded everyone by adopting the previously unfancied “Zelenskyy” as the official English-language spelling of the new president’s name.

It is, of course, unreasonable to single out Zelenskyy for particular criticism on this issue. As anyone who has ever covered Ukrainian affairs will confirm, spelling confusion surrounding the English-language versions of Ukrainian names is the rule rather than the exception. While some names such as Shevchenko lend themselves to flawless transliteration, many are ambiguous enough to open the floodgates for all manner of competing variations. This results in English-language coverage of Ukraine in both the media and academia that often employs a dizzying array of contradictory spellings while referring to the same people. For a country that is still struggling to shake off decades of international obscurity, this is particularly unhelpful.

The past five years of hybrid warfare with Russia have exposed the extent of the problem surrounding Ukraine’s low international profile, with the Kremlin skillfully exploiting outside ignorance about the country in order to weave all manner of false narratives. Many of Moscow’s most absurd accusations have relied heavily on Ukraine’s status as an unknown quantity, with this regrettable reality providing a conveniently blank canvas for Kremlin propagandists to deface as they wish. Spelling the English-language versions of Ukrainian names in a consistent manner will not prove decisive in the information war, but it would mark a minor step away from perceptions of the country as a perplexing and often incomprehensible place where even people’s names are open to interpretation.

None of this should be confused with the far more politically loaded issue of the correct spellings for Ukraine’s towns and cities. The drive to promote transliterations of Ukrainian-language place names in the English-language media is part of a much broader effort to shed the lingering vestiges of historic Russian domination. In this context, the recent decision by the UK’s Guardian newspaper to switch from “Kiev” to “Kyiv” qualifies as a small but significant success in Ukraine’s struggle to assert its national identity on the global stage. Likewise, when contemporary coverage of Ukraine features outmoded Russian-language transliterations of Ukrainian place names such as “Kharkov,” it inevitably now invites assumptions of a pro-Moscow bias.

This kind of logic rarely applies to the inconsistencies surrounding the spelling of Ukrainian names. On the contrary, the seeming randomness of these spellings can be due to anything from the whims of passport office clerks to the preferences of individual journalists. The new president’s recent clarification is a welcome step in the right direction that should encourage more Ukrainian public figures to end the ambiguity over their own English-language identities. This would certainly be long overdue. Ukraine’s nation-building journey is an unfinished epic that will continue for many years to come, but after almost three decades of independence, it would be nice if we could at least agree on how to spell people’s names.