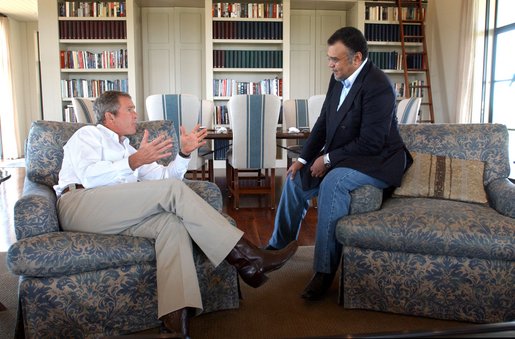 Once again, Saudi officials are on a rhetorical rampage against the United States. Bandar bin Sultan, the former ambassador to the United States and current Saudi intelligence chief, has warned that the kingdom will make a “major shift” away from its 80-year alliance with Washington.

Turki al-Faisal, another former ambassador to the United State, said in an interview this week that “there is definitely, from a public opinion point of view in the Kingdom, a high level of disappointment in the US government’s dealings, not just with Palestine, but equally with Syria.”

But while Saudi frustration with the policies of the Barack Obama administration is real, the latest complaints and threats are more about trying to influence US policy than about changing the fundamental foreign policy orientation of the world’s biggest oil producer.

As Gregory Gause, an expert on Saudi Arabia at the University of Vermont, said in an interview, “They’re mad but they have no other place to go.”

State Department officials have tried to tamp down the speculation of a deep new rift with Saudi Arabia. State Department spokeswoman Marie Harf told reporters on Wednesday “that fundamentally, our relationship is a very close and strong one with the Saudis.  We have the same goals in the region, whether it’s ending the civil war in Syria and destroying their chemical weapons, preventing Iran from acquiring a nuclear weapon, Middle East peace we work very closely with the Saudis on.  The discussion is about how we get there, and there are complicated issues, and we don’t always disagree with every one of our allies and partners.”

Harf noted that Secretary of State John Kerry had a two-and-a-half-hour lunch on Monday with Saudi Foreign Minister Saud al-Faisal in London where both were attending a meeting of the “London 11” meant to coordinate policy on Syria with the Syrian opposition. According to Harf, “this idea that’s out there about reducing cooperation was not raised in any form that day with the Saudis.”

US power may be in relative decline but there is still only one superpower capable of safeguarding world oil supplies and guaranteeing freedom of navigation in the Persian Gulf.  Indeed, the Saudis have intensified their defense relationship with the United States by ordering $60 billion in new American arms in recent years, including $6.8 billion announced just last week.

This is also not the first time – and is certainly not likely to be the last – that Saudi officials have sought to demonstrate their unhappiness with US policies in dramatic ways:

In August, 2001, then Crown Prince Abdullah told Bandar to inform the George W. Bush administration that “starting today, you go your way and we will go our way.” Abdullah was incensed at what he saw as insufficient efforts by the new Bush team to end an Israeli crackdown on Palestinians or to support new peace negotiations.

In 2003 and over the next few years, the Saudis vehemently opposed US policies toward Iraq, from overthrowing Saddam Hussein without replacing him with another Sunni Muslim general to promoting elections that gave Iraq a Shiite Muslim government for the first time in four centuries. The Saudis have still not sent an ambassador to Iraq, which they consider under the influence of Iran.

In 2011, the Saudi monarchy was horrified that the Obama administration encouraged Egyptian president Hosni Mubarak to step down in the face of popular protests. The Saudis are widely believed to helped engineer the counterrevolution that ousted Mubarak’s elected successor, Mohamed Morsi, last summer.

The government’s current unhappiness is mostly over US policies toward Syria and Iran, and reflects disappointment that the Obama administration has not given more support to the Syrian opposition and failed to follow through on threats to strike Syria following its apparent use of chemical weapons in August.

Saudi hatred for the Assad regime dates to Bashar al-Assad’s alleged involvement in the 2005 assassination of former Lebanese Prime Minister Rafik Hariri, a Saudi ally. While the Saudi leadership opposed the revolts that toppled secular leaders in other Arab countries, it has passionately supported the Syrian opposition, which is largely Sunni, against Assad, an Alawite backed by Shiite Iran.

Popular sentiment plays a major role in the Saudi attitude toward Syria, as it did during the second Palestinian intifada. Even though the Saudis have not identified a replacement for Assad, this is “one of the few cases where there are bottom-up pressures” to back the opposition, according to Gause. The Syrian revolt – and the Assad government’s brutal attempts to suppress it, “have grabbed people,” Gause said, much as Saudis coalesced behind the Palestinians a decade ago. Saudi opinion columns are overwhelmingly in support of the Syrian opposition, he says.

Saudi animosity toward Iran is another factor in the government’s backing for Syrian rebels. If Assad falls, the theory goes, it will undercut Iran’s regional influence and undermine Hezbollah, the Lebanese Shiite movement backed by both Syria and Iran. Saudi Arabia and its Sunni Gulf allies think they will benefit and that Iran will lose its purported allure for Arab Shiites in their countries.

Thus, the tentative warming trend between the United States and Iran since the June election of Iranian President Hassan Rouhani is creating jitters in Saudi Arabia as surely as it is rattling some in Israel. The Saudis also appear to see Rouhani as a “wolf in sheep’s clothing” – as Israel Prime Minister Benjamin Netanyahu has described him — and worry that Iran is using negotiations to play for time and develop nuclear weapons. Yet the Saudis are not enthusiastic about other alternatives, including US-Iran reconciliation or a US or Israeli attack on Iran that could result in Iranian retaliation against Saudi Arabia.

Criticizing the United States is also a way of distracting attention from the country’s myriad social and economic problems, including the low status of women high youth unemployment and rising poverty.

While the Obama administration’s recent foreign policy making certainly leaves much to be desired, the Saudi reaction – including rejecting a seat on the UN Security Council for which Saudi diplomats had lobbied for years – does not look more sophisticated or mature. Indeed the latest temper tantrum may make Washington less inclined to take Saudi concerns into account in deciding what is best for US interests in the region.

Barbara Slavin is a senior fellow at the Atlantic Council and Washington correspondent for Al-Monitor. She tweets @BarbaraSlavin1