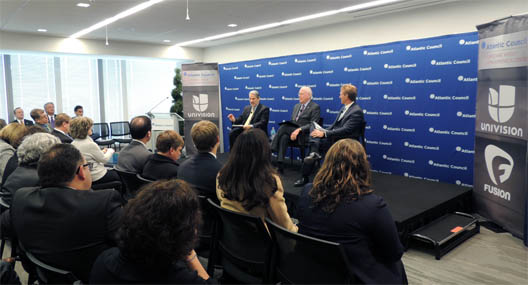 American political opinion has shifted to support a broad US government opening to Cuba, including an end to the 54-year-old trade embargo and restrictions on travel by Americans to the island, according to a nationwide poll released today by the Atlantic Council.

The survey of more than 2,000 people nationwide – including extra sampling among Hispanics and in the politically critical state of Florida – found that 56 percent favor a more direct US engagement with Cuba or even a normalization of relations with a nation that US policy has treated as a pariah since the 1960s.

The poll offered even greater evidence that a political tide has turned with its finding that two critical domestic political constituencies favor renewed ties to Cuba by even larger majorities than the nation at large. Survey respondents from the US Hispanic community supported broader Cuban relations by 62 to 30 percent. And voting-age residents of Florida, a decisive swing state in recent presidential elections, back a policy change by 63 to 30 percent. The swing state’s swing in favor of broader Cuba relations is what provides “the ‘Aha!’ moment”  of the poll results, Atlantic Council President and CEO Fred Kempe said at their release.

American political leaders have backed a Cuba policy that for years has been ineffective because they have sensed that any change would draw opposition from conservatives and Cuban-Americans, said Democratic Sen. Patrick Leahy of Vermont, in remarks at the Council’s release of the poll. “It’s about time that somebody touched that third rail,” Leahy said. With the poll’s demonstration of the change in American opinion, “Now it’s the responsibility of the White House and the Congress to have the courage to step up. Let’s end this Cold War in our own hemisphere.“  Republican Sen. Jeff Flake of Arizona agreed, telling the Council audience that a United States that 20 years ago re-opened relations with another Cold War enemy, Vietnam.

US-Cuba: What is American Public Opinion Today? by Atlantic Council

Among the details of the survey were that 61 percent of Americans nationally support the US government appointing a special envoy to rebuild relations with Cuba. And support for those relations was higher among those Americans who vote than among others.

“I don’t know Cuba, but I know politics,” said CNN political analyst Paul Begala, one of several politicians and specialists who spoke at the release of the poll. Of the US public’s opinion about  their government’s isolation of Cuba, he said, “It’s changing so fast, it’s hard for political analysts to wrap their heads around it.”