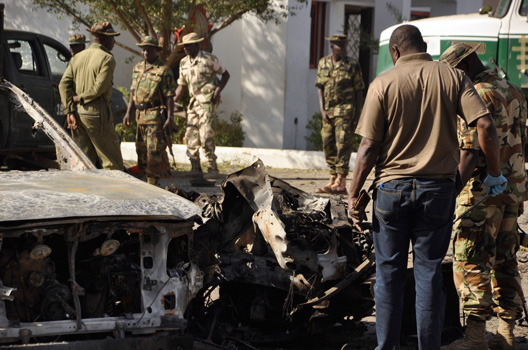 Boko Haram, the militant Islamist group that has a foothold in northern Nigeria, has begun to consolidate control over large swathes of territory threatening the stability of Nigeria and its neighbors.

The militants have resorted to using female suicide bombers as they ramp up their fight against the Nigerian government ahead of elections in February.

The US should be looking for ways to engage Boko Haram, Bruton tells New Atlanticist’s Ashish Kumar Sen.

When you started to see suicide bombers appearing in the Somali conflict, for example, it was understood to be a hard proof that transnational jihadis had come in and that there was foreign training and foreign money at play. I am concerned that this is proof of a parallel development taking place in Nigeria.

Q: Boko Haram’s leader Abubakar Shekau expressed support for Islamic State in Iraq and al-Sham [ISIS] leader Abu Bakr al-Baghdadi over the summer. Are you seeing a greater level of coordination between Boko Haram, ISIS, and al Qaeda in the Islamic Maghreb [AQIM]?

A: There has been a lot of concern about the possibility of cooperation at some future point between Boko Haram and other jihadist movements like ISIS, AQIM, or even al Shabaab [in Somalia or Kenya]. There is no current collaboration at the operational level and Boko Haram is not currently regarded as any kind of threat to the United States homeland. But with developments like these, you might see that perspective on them starting to evolve.

Across Africa, people like Shekau are very good at understanding what makes the international community nervous. So you always have to wonder: to what extent are declarations of allegiance to ISIS or to al Qaeda just intended to make Washington sweat? I don’t know anyone who has supposed at this point that ISIS and Boko Haram are actually working together or even doing a significant amount of cross training or exchange of fighters, though there’s probably some chatter between them and an exchange of fighters may not be too far off. I would say it’s definitely an aspirational move on Shekau’s part.

One of the challenges that US counterterror analysts face is that movements like Boko Haram are big tents. You may have elements within Boko Haram that have every intention of becoming transnational terrorists and hurting the American homeland. But the majority of the movement is just local guys who are angry and upset and don’t have a better vehicle for their grievances. It’s a phenomenally difficult thing for people sitting on the outside, especially sitting in Washington, to start parsing those actors. The latest ceasefire declaration by the Nigerian government [on October 16] is a great example: the ceasefire was announced by one of the top military spokespeople and facilitated by the Chadian government, and it turned out the government’s interlocutor wasn’t even a legitimate representative of Boko Haram. [The Nigerian government] doesn’t even know who the movers and shakers are in this rebel group.

Q: How serious is the risk that Boko Haram could destabilize Nigeria’s neighbors, particularly Cameroon, Niger, and Chad?

A: This is the real and present threat that is posed by Boko Haram: that it will destabilize Nigeria and / or the neighboring countries. Boko Haram is growing in strength, holding and expanding its territory, and has a significant capability to inflict damage on communities on both sides of Nigeria’s porous borders. And the nations bordering Nigeria have varying capabilities to respond to Boko Haram.

Q: Boko Haram appears to be using the ISIS playbook as it attempts to carve out and hold territory in northern Nigeria.

A: This is very new. They have been attempting to hold and govern territory for less than a month now. They have issued calls for people to return to the territory and have promised that the people who come back will be safe. They have also promised that they are going to start governing and will try to deliver services, but I have not seen any evidence to indicate whether or not their efforts will be successful.

A: Frankly, I think the US should be finding ways to engage with Boko Haram. Boko Haram is horrifically violent — so are the Nigerian security forces — but it is attempting to serve as a voice for some of the grievances of northern Nigeria’s population. And some of Nigeria’s 70 million Muslims are embracing them. Maybe it is only for want of a better option, or because many people believe that the Nigerian government is even more brutal than Boko Haram, but the rebel group does actually have some support on the ground. And if a significant number of average people perceive Boko Haram as being on their side, and as a legitimate vehicle for expressing their political grievances, that means that you ignore them at your peril.

You have to find a way to bring the people who are participating in Boko Haram for legitimate reasons — because they feel angry at the Nigerian government or feel disenfranchised and want economic growth — into the political dialogue. If we take the standpoint that Boko Haram are terrorists and we are not going to talk to them, we are going to create enemies and push many more people into radicalism. We lost that fight for many years in Somalia. It’s not a nuanced position to take, and you need a nuanced position because the situation in northern Nigeria is enormously complicated.

What’s indisputable is that if you go on the ground in northern Nigeria and ask people whom they hate more, it will be a coin toss whether they say Boko Haram or the government. That shows us that this is not a black and white conflict and that you really need to have a smarter approach. You just cannot afford to villainize anyone because everybody is a villain. There are no heroes here.

If we just talk about throwing our support behind Abuja, a) they’re not a good partner and the human rights violations prove that, and b) we’re likely to make the situation worse. It’s going to be hard to operationalize our military support, and even if we do manage to get around the Leahy Amendment [which prohibits the US from providing weapons or other support to foreign forces that are credibly accused of human rights violations] and operationalize it we are likely to do more harm than good. We may be perceived as condoning or enabling the Nigerian security forces’ human rights abuses against Muslims, and that would be a terrible outcome for broader US security interests.

Q: How did Boko Haram emerge as this threat?

A: It is not properly understood that militia groups like Boko Haram are everyday actors in Nigerian life. Nigeria has a huge problem with security because there are not enough police — there are only 370,000 police in a country of 140 million — so youth militia have emerged as an alternate form of security, especially in Nigeria’s huge markets and in the north. These various militia have had a long history of being quasi-criminal enterprises, but also of working hand in glove with the government. In Boko Haram’s case, it was the brutality of the Nigerian security forces and specifically, the murder of Boko Haram’s leader [Mohammed Yusuf] in police custody in January 2009 — that pushed them onto this violent trajectory.

At a recent Atlantic Council event, Human Rights Watch expert Mausi Segun noted that up until mid-2012, Boko Haram was actually very firm in its commitment that it would not hurt women and children, and they didn’t. It was only, they say, the arrest and rape of their own families and children by the Nigerian security forces that caused them to take this tactic of kidnapping women, girls, and attacking schools as a kind of tit-for-tat retaliation.

What I want to stress here is that Boko Haram didn’t have some ideology that made it predetermined that they were going to become an international terrorist group. They have become a terrorist group because of the interplay with the Nigerian security forces, the government’s poor governance record, and massive abuses against the population and Boko Haram. This is really a failure of the Nigerian state. It is a homegrown problem.