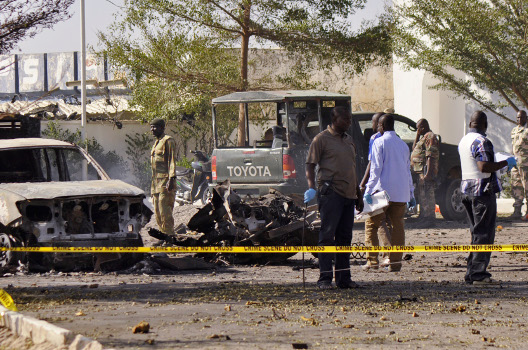 Last week was a good week for the militant group Boko Haram and much less so for Nigeria and its neighbors, although one would be hard pressed to tell it from the relative nonchalance with which significant developments in the West African country’s fight against the brutal insurgency have been greeted not only by American media focused largely on new standoffs in Washington between the White House and emboldened Congressional Republicans after the midterm election, but also by the international community as a whole, the latter’s attention devoted almost entirely to the Asia-Pacific Economic Cooperation summit in Beijing and the G20 summit in Brisbane shortly thereafter.

First, the Islamist insurgents continue to gain considerable ground militarily. What I dubbed the militant group’s “Version 3.0” in Congressional testimony earlier this year has successfully seized and holds wide swathes in three states in northeastern Nigeria—Borno, Yobe, and Adamawa—even as its campaign of terrorist attacks expands even farther to other Nigerian states as well as into neighboring countries. In the last days of October, Boko Haram fighters stormed Mubi, the second-largest urban center in Adamawa State with a population of about 130,000, and, after chasing out the military forces stationed there and taking control of town, renamed it “Madinatul Islam” (“city of Islam”). The fall of Mubi was all the more a big blow to the Nigerian military because it is the hometown of Air Chief Marshal Alex Sabundu Badeh, chief of the defense staff. In the aftermath of the fiasco, six senior military officers, including the colonel in command of the brigade, were taken into custody for questioning and may face a court martial for deserting their posts during the attack. As the militants’ offensive continued into the first week of November, resulting in their seizure of Malam Fatori, a commercial hub in Borno State, some 20,000 Nigerians fled over the nearby border with Niger. Discouragingly, among the refugees were more than 300 Nigerian soldiers who were supposed to defend the town but instead abandoned their positions and were among the first to take flight.

While a concerted push by the Nigerian military managed to take back Mubi on November 13, the withdrawing Boko Haram fighters then swung northwest toward Chibok, from where they had kidnapped nearly 300 schoolgirls in April. In fact, the following day—seven months to the day after the students, 219 of whom are still missing, were kidnapped from the government Girls Secondary School—Boko Haram wrapped up its week by triumphantly hoisting its banner over its young victims’ hometown, a chillingly symbolic victory however fleeting (government forces retook the town on Sunday after mounting a major operation requiring the pulling of units from elsewhere).

Moreover, in its ongoing offensive, Boko Haram is not only using its well-honed terrorist tactics—last Monday, for example a suicide bomber killed 58 boys at a school assembly in Potiskum, Yobe State, while a week before that, another suicide bomber in the same town killed more than a dozen people attending a Shia religious procession marking Ashura—but also showing growing conventional military capabilities. In early September, the group shot down a Nigerian Air Force Dassault-Dornier Alpha attack jet—a feat that fighters of the so-called Islamic State in Iraq and Syria (ISIS) have not yet succeeded in doing—and subsequently, in a tip of the hat to the latter group’s grisly signature product, released a video that showed what it said was the beheading of the captured pilot.

Second, another video by Boko Haram, released through Agence France-Presse on November 10, showed, as analyst Jacob Zenn has pointed out, an increasing convergence between the Nigerian militants and their ISIS counterparts not only in terms of symbolism and ideology, but also insurgency doctrine. Boko Haram leader Abubakar Shekau first expressed “support” for the Islamic State’s caliph, Abu Bakr al-Baghdadi, this past summer, but the pace of at least virtual exchange between the two groups represented by the leaders has quickened. Boko Haram has added the jihadist black banner (rayat al-uqab) to its previous crossed-guns-and-quran logo and the Islamic State’s de facto anthem, “My Umma, Dawn has Arrived,” to the musical repertoire on its videos. In the most recent video, Shekau even appears in a mosque to declare that he is establishing his own “Islamic Caliphate” and sends his greetings to the “brothers” in Afghanistan, Pakistan, Somalia, and Yemen, as well as to “the Caliphate in Iraq and Syria.” In case anyone misses the intended parallel of the messaging, the high-quality video cuts to a clip of al-Baghdadi proclaiming his caliphate in Mosul back in June.

Meanwhile, ISIS’s official magazine, Dabiq, has cited Boko Haram’s kidnapping of the Chibok schoolgirls as precedence for its enslavement and sexual abuse of Yazidi young women in Iraq, while Boko Haram has apparently taken a cue from ISIS as it has begun to stoke sectarian conflict between Muslims in Nigeria with its attacks on the small minority of adherents to Shia Islam. Both groups have abandoned hit-and-run guerrilla tactics in favor of seizing and holding increasingly large chunks of territory. As one of the most astute observers of the West African giant, former US Ambassador to Nigeria John Campbell recently noted, “Boko Haram’s focus appears now to be on the acquisition of territory…It also appears to be moving in the direction of providing services, especially security for the residents in the territories it controls.”

Third, last week Nigeria’s ambassador to the United States, Adebowale Ibidapo Adefuye, delivered a blistering critique, subsequently posted on the embassy’s website, of what he characterized as the insufficient “scope, nature and content of the United States’ support for us in our struggle against terrorists,” specifically mentioning the failure to share intelligence and the refusal to sell weapons to the Nigerian government. Irrespective of what one makes of the diplomat’s charges and the possible explanations for what are perceived as slights—inter alia, that a contingent of US military personnel arrived in Abuja just two weeks after the Chibok kidnappings to advise the Nigerian military, that President Goodluck Jonathan himself has spoken of extremist penetration of the security services, and that more than one thousand Nigerian personnel have undergone Russian training in recent months, undoubtedly reason enough for American intelligence officials to be careful about what they passed along—the very fact that the remarks themselves were made so publicly is indicative of the tension coursing its way through Nigerian society, not only among the political elites and military personnel, but also felt by ordinary Nigerians. In less than four months, Africa’s most populous country will go to the polls with its electorate increasingly frustrated by the failure not just to win the release of the kidnapped schoolgirls (which is the cause célèbre the rest of the world seems to fixate on exclusively when it thinks about Nigeria at all), but to make any real progress towards resolving conflict that has, according to one well-regarded tracker, taken the lives of more than 17,000 people since the inauguration of the incumbent president’s current term (a ceasefire announced by senior Nigerian government officials in mid-October proved to be premature, to say the least).

Consequently, whatever one thinks of Ambassador Adefuye personally or of his accusations substantively, his cri de cœur is one that can fairly be said to represent the sentiments of many of his fellow countrymen: “The terrorists threaten our corporate existence and territorial integrity. There is no use giving us the type of support that enables us to deliver light jabs to the terrorists when what we need to give them is the killer punch. A friend in need is a friend indeed.” It is a measure of general public desperation that sees the rise of vigilante groups like the Civilian Joint Task Force, profiled in the New York Times Magazine two weeks ago, as well as grotesque displays like the parading around this past Sunday of the severed head of the female suicide bomber who killed at least a dozen people in a market in Azare, Bauchi State, and the mob lynching of two men accused of accompanying her. And the anticipated drop in national revenue from declining oil prices led Nigeria’s coordinating minister for the economy and finance minister, Ngozi Okonjo-Iweala, to quite correctly announce over the weekend that a tightening of next year’s federal budget may be the responsible course of action—the cuts to all but essential obligations likely to result from such tightening will hardly improve the mood on the street.

While it is understandable that the United States and its major allies—faced with the ISIS threat in Iraq and Syria, the ongoing crisis in Ukraine, and the aggressive expansionism of China in East Asia, among other challenges—might not have much appetite for getting embroiled in another conflict in what appears to be a remote corner of Africa, this view is strategically and geopolitically myopic. Not only is Nigeria the most populous country in Africa, it is also the largest economy on a continent that is home to seven of the fastest growing economies in the world this decade. The rise of Boko Haram and other violent non-state actors not only threatens this progress, but should they not be checked, there is considerable risk of their rapid expansion given the overall weaknesses of states in the region—Mali is still struggling with restive Tuaregs and violence by militants linked to al-Qaeda’s regional affiliate in its north, Niger faces pressure from the ongoing disintegration of Libya, and Burkina Faso is still reeling from the vacuum following the ouster of its longtime president, just to cite three examples. In fact, there is already recent evidence that Boko Haram’s repeated incursions into Cameroon have turned the northern part of that country into a new front for the movement, which appears to have also established an operational branch in Chad among the Kanuri-speaking populations closely linked ethnically to its base in northeastern Nigeria.

Two months ago, I outlined the case why the United States, its African partners, and the rest of the international community need to focus more attention and resources—and, as I repeatedly stressed, the effort will require political, economic, and social instruments, not just military ones—on a situation that was already dire, but could quickly deteriorate even more significantly, arguing that ISIS is not be the only self-proclaimed caliphate against which a strategy has to be developed and a coalition assembled. After a week like the last one in Nigeria, major alarm bells ought to be ringing in capitals around the globe.

J. Peter Pham is director of the Atlantic Council’s Africa Center. You can follow the Africa Center on Twitter at @ACAfricaCenter.