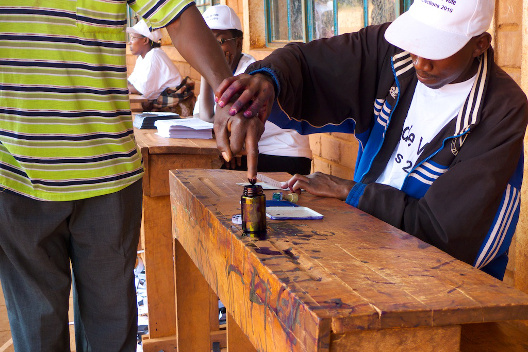 Unrest in Burundi initially began in May as demonstrations against Nkurunziza’s third term escalated into clashes among pro- and anti-Nkurunziza demonstrators and the police throughout the country’s capital Bujumbura. The police were heavily criticized for a harsh and sometimes-violent response to demonstrations, and a number of independent media outlets were destroyed or forcibly shuttered in wake of the protests. On May 13, police and military loyal to Nkurunziza put down a coup attempt by Major General Godefroid Niyombare.

Despite calls from the United States, United Nations, and Burundi’s influential Catholic Church for Nkurunziza not to seek a third term, the president and ruling party remain defiant. Supporters maintain that the country’s constitution allows Nkurunziza to be directly elected for a third term. They bolster the claim with a favorable ruling from the country’s constitutional court, though the flight of the court’s vice president—who said he was intimidated into ruling for the president—shortly after the decision casts some doubt on the impartiality of that court.

Following a handful of key government defectors, the country’s Second Vice President Gervais Rufyikiri fled Burundi on June 25. Three days later he was joined by Speaker of the Parliament Pie Ntavyohanyuma. Both allege that their lives were in danger due to their opposition to Nkurunziza’s third term bid. The Burundian government, however, maintains that the officials fled ahead of the conclusion of an investigation that it says would have linked the men to May’s coup attempt. The officials join more than 148,000 of their countrymen who have fled Burundi since the crisis began.

Parliamentary polls, initially scheduled for May 26, were delayed twice due to the country’s deteriorating security situation. In the lead up to the polls, the European Union (EU) cancelled its election funding and monitoring mission to Burundi; the EU decision followed Belgium’s announcement earlier in May that the former colonial power was suspending electoral assistance and police training programs amid the violent demonstrations. Similarly, the United States suspended training for Burundi’s peacekeeping forces and aid directed toward convening elections.

One day before elections, African Union Commission officials joined the chorus of criticism, noting in a statement that conditions were not in place for free or fair elections in Burundi. The AU then pulled its election monitoring mission.

But one should not read too much into the cancellation of AU election observers. The EU’s actions ended funding for a variety of election-related initiatives, including support for the AU monitoring mission. Simply put, in addition to (or in the absence of) any genuine concern about the need for political dialogue in Burundi, the AU had no money to fund its observer mission.

Amid a number of violent incidents, including grenade attacks and sporadic gunfire in the week leading up to and on election day, the polls occurred as scheduled. Much was made of Nkurunziza’s appearance in his hometown of Ngozi to cast his ballot, where he bicycled into town and was met by jubilant crowds and lines of voters. But the turnout in the rest of the country, and particularly in opposition strongholds of Bujumbura, was far lower. In addition to the opposition’s call for Burundians to boycott the polls, grenade explosions and gunfire, sometimes directed at polling stations, caused delays and intimidated would-be voters.

On Friday, the UN Electoral Observation Mission in Burundi declared, unsurprisingly, that Burundi’s parliamentary elections were neither free nor fair. It also confirmed the deaths of at least six people in election-related violence. The government’s response to the UN report remains to be seen; the last time the UN was connected to accusations the government disliked, its employees were expelled from the country (the UN’s security adviser was declared persona non grata in April 2014 after a leaked cable warned that the ruling party’s youth wing was growing increasingly militarized).

The East African Community recently called on Burundi to postpone until July 30 the presidential polls scheduled for July 15 to allow time for the designated facilitator, Ugandan President Yoweri Museveni, to lead a national dialogue. The regional body also urged: “Whoever wins the presidential elections in Burundi should form a government of national unity involving those who participated in elections and those who did not; and should as necessary provide seats for special interest groups.”

For its part, the ruling party noted the impossibility of postponing elections past July 26, exactly one month prior to the expiration of Nkurunziza’s current term, without first amending the country’s constitution.

In many ways, 2015’s polls thus far eerily resemble Burundi’s 2010 elections: in wake of repression, the opposition boycotted polls, which were then won overwhelmingly by the ruling party; voter intimidation and politically-motivated attacks and killings characterized the run-up to elections; and, continuing for months into the tense aftermath of elections, tit-for-tat revenge attacks—including numerous grenade attacks, often thrown into houses or businesses—perpetuated by all sides left a tenuous peace.

Whether the latter similarity about the polls’ violent aftermath will be accurate this year remains to be seen—and will surely be shaped not only by parliamentary elections, but by both the process and the results of the presidential contest.