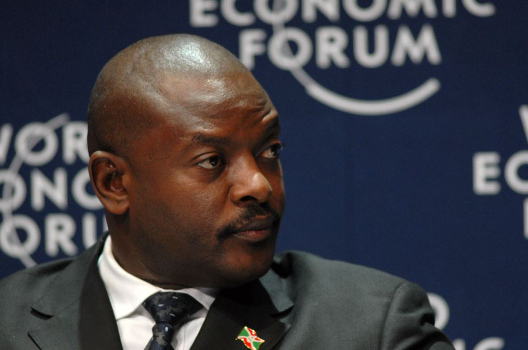 Reading recent pronouncements about the crisis in Burundi issued by the US State Department, one would think that the ambitions of incumbent President Pierre Nkurunziza for a third term are the only real issue. Of course, the question of whether he can and should seek another five years in office raise, respectively, serious, distinct issues of law and of policy, which constitute legitimate topics for debate not only by jurists and political scientists, but ultimately by the people of the Central African country who should have the final say. However, outsiders, well-meaning or otherwise, hardly make this task any easier by repeatedly framing it exclusively as a matter of term limits while ignoring key aspects of the social, historical, and political dynamics at play.

Yet if one wants to invoke Burundi’s 1993-2005 civil war, which took the lives of an estimated 300,000 people, it would be helpful to say something about the context of that conflict, especially since that background has a great deal to do with the current crisis, perhaps more than the many policymakers and analysts care to admit.

Burundi, like its neighbor to the north, Rwanda, is one of the few African countries to have a direct political and territorial continuity with a pre-colonial state. From its foundation by the semi-mythical Ntare I Rushatsi Cambarantama as a kingdom in the late 17th century through its period under successive German and Belgian colonial administrations, Burundi was ruled by its cattle-owning Tutsi ethnic minority, who enjoyed dominion over the largely agricultural Hutu majority. Unlike Rwanda, where the majority Hutu gained power around independence and subsequently subjected its Tutsi minority to mass murder and exile, in Burundi the ethnic minority, who currently make up about 14 percent of the population, managed to retain its dominance over the majority after independence in 1962 through periodic violence followed by stretches of repression.

When the refusal of the government to recognize Hutu gains in the first post-independence parliamentary elections in 1965 provoked an abortive coup attempt by a group of frustrated Hutu, the regime used the failed putsch as a pretext to eliminate hundreds of Hutu politicians and intellectuals. Seven years later, in the wake of another attempted rebellion, the Tutsi-led dictatorship then in power unleashed a five-month reign of terror that was described by one of America’s foremost authorities on Africa’s Great Lakes Region, René Lemarchand, as “a partial genocide”: somewhere 200,000 to 300,000 people were killed on the basis of their “Hutuness,” with civil servants, educated males, and university students being especially targeted.

It was not until two decades later, in 1993, that Burundi had its first head of state from the ethnic majority, Melchior Ndadaye—and he lasted only three months before he was assassinated by Tutsi extremists from the army, thus initiating the civil war. Ndadaye’s successor, Cyprien Ntaryamira, also a Hutu, was barely in office for two months when he perished with Rwanda’s President Juvénal Habyarimana in the shoot-down of the latter’s presidential jet that precipitated the Rwandan genocide. While the genocide raged in Rwanda and received such attention as the world was willing to give it at the time, a Tutsi officer who had previously seized power in 1987, Pierre Buyoya, staged another military coup and installed himself in the presidency. The clashes between Hutu rebels and the Tutsi army—and the latter’s reprisals against civilians from the majority ethnic group—left 300,000 people dead and another 550,000, nearly 10 percent of the population of the time, displaced.

Under international pressure, the warring factions negotiated the Arusha Agreement in 2000, which provided for an ethnic-based sharing of power in the government and military as well as a transition towards democratic elections. It is important to note that the most important rebel group, the National Council for the Defense of Democracy-Forces for the Defense of Democracy (known by its French acronym, CNDD-FDD) was not a party to the accord in Arusha and only signed a separate peace deal with the Buyoya government in 2003, after Pierre Nkurunziza took over the group. Under Nkurunziza’s leadership, the CNDD-FDD registered as a political party in 2005 and swept the legislative elections later that year, laying the groundwork for him to be chosen president by the new parliament.

Under Nkurunziza, who was elected by popular vote to another term in 2010, although some opposition parties withdrew from the poll, the country has made modest, but consistent, progress on a number of fronts, including the fiscal, where it doubled its tax receipts between 2010 and 2014 and moved to paying nearly 80 percent of its recurring expenditures from domestic revenue, even as it lowered the corporate tax rate and introduced a value-added tax (VAT) to broaden the tax base.

It was perhaps in the military where some of the biggest transformation occurred. The Arusha Agreement and the 2003 Pretoria Protocol on Political and Defense Power Sharing—the accord that brought the CNDD-FDD into the political process, really ending the civil war, and which, oddly enough, almost never gets mentioned by any of the Johnny-come-lately diplomats and pundits now pontificating on the crisis—established the principal of a 50-50 ethnic quota system for the new “National Defense Force” (FDN), in contrast to the old Armed Forces of Burundi (FAB), which has hitherto been almost exclusively Tutsi despite the Hutu making up 85 percent of the population. Moreover, positions in the top ranks of the integrated military were split 60-40 between those from the old FAB officer corps and their opposite numbers in command of the CNDD-FDD. Since then the FDN has been the one of the largest recipients of US military training and assistance in Africa and, by and large, the effort has paid off. Notwithstanding it small population, Burundi has become a major force in peacekeeping across the continent, with not only some 6,000 troops deployed with the African Union Mission in Somalia (AMISOM), but units serving with United Nations missions in Côte d’Ivoire, the Democratic Republic of the Congo, Mali, South Sudan, and Sudan.

Yes, Burundi has made significant strides in ethnic integration over the course of the last decade: the ruling CNDD-FDD draws its support from the Hutu majority, but does have Tutsi support, including some leading members of the party; likewise, the opposition has both Tutsi and Hutu within its ranks. Nevertheless, while the progress has been impressive, it has hardly been consolidated and it would be unrealistic to wishfully think that decades if not centuries of communal tensions did not play quite a significant role in the current political dynamics, even if almost everyone in Washington seems to be conditioned by political correctness not to mention it.

A closer look reveals a troubling ethnic dimension to the crisis in Burundi, one that has largely been glossed over, if not ignored altogether. One of the most prominent leaders of the protests against the incumbent president, the first Hutu to have come even close to completing his term in office, is Pacifique Nininahazwe, founder of the nongovernmental Forum for Conscience and Development (FOCODE), a Tutsi. Likewise, the much-quoted vice president of the Constitutional Court who went into exile rather than go along with tribunal’s ruling that President Nkurunzize was eligible to run for another, final term, Silvère Nimpagaritse, is likewise a Tutsi.

Ethnicity also appears to a correlate with the geography of the crisis: the four districts (out of a total of thirteen) within the capital where the protests have been most persistent—Ngagara, Musaga, Nyakabiga, and Cibitoke—also happen to be those that were largely ethnically cleansed of their onetime Hutu residents following the assassination of President Ndadaye in 1993. Over the weekend, Agence France-Presse reported that the crisis had spread outside the capital with the homes of local leaders of the ruling party being attacked and protests breaking out. Interestingly, aside from the capital itself, so far the disturbances have affected only five communes (county-equivalents) in only three of Burundi’s seventeen provinces: Mukike and Mugongomanga in Bujumbura Rural Province, Rusaka in Mwaro Province, and Matana and Bururi in Bururi Province. All these areas are those where Burundi’s Tutsi minority happens to be concentrated, in part due to their geographical proximity to the capital and the privileges enjoyed during the long years of the dictatorship. Bururi, perhaps not-so-coincidentally, is the home province of Michel Micombero, Burundi’s military dictator from 1966 to 1976, whose regime, dominated by a clique from his Hima subclan in Bururi, not only carried out the 1972 genocide against the Hutu, but also slaughtered Tutsi who they thought stood in their way, including the 24-year-old former King Ntare V.

The minority ethnic background of many in the anti-Nkurunziza demonstrations and attacks has also provoked a response in terms of motivating members of the majority into various militia groups in addition to the well-known Imbonerakure (“those who see far”) youth wing of the CNDD-FDD. This trend adds to the insecurity since, as civil society observers have noted, the president does not seem to be in control of emerging militias.

The ethnic dimension also colors the regional diplomacy. Rwanda’s President Paul Kagame, who also faces recent US opposition to moves to allow him to stand for a third term, is a Tutsi whose family fled to Uganda to escape the ravages of the “Hutu Power” revolution in 1959 and nowadays presides over a country where, in the wake of its own horrific genocide, it was decided that ethnicity would be officially denied in contrast to Burundi’s post-conflict approach. Uganda’s President Yoweri Museveni is usually described as being the son of a cattle herdsman of the Banyankole, but who are the pastoralists of the Ankole kingdom? None other than the Hima, who traditionally enjoyed privileged legal status over cultivators from the Iru group.

None of this is to say that it would necessarily be good for Burundi—to say nothing of the volatile neighborhood around the country which, after all, borders on the Democratic Republic of the Congo with its own continuing political upheaval—that the current tensions continue, much less that President Nkurunziza gets another term in office. That decision belongs to the Burundian people, who should be allowed to peacefully express their sovereign will in elections that are free, fair, and credible. However, ignoring fairly significant factors—including the ethnic dimension—that clearly impact the crisis dynamics as well as how they are perceived within Burundi does nothing to advance a constructive solution.