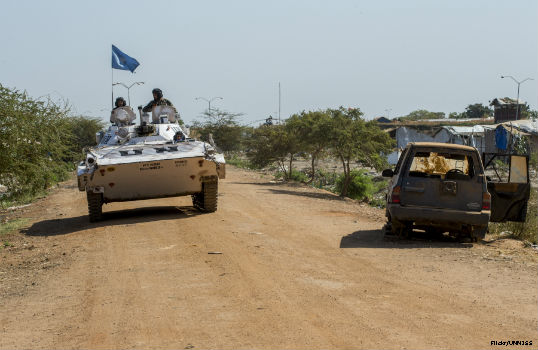 Recent reports that United Nations (UN) Peacekeeping in South Sudan failed to protect both civilians and foreign workers from rape, beatings, and robbery during a recent spate of violence in July are the most recent in a long string of peacekeeping scandals in Africa. In some cases, blue helmets have simply failed to protect civilians from abusers. In others, peacekeepers have actively abused the civilians they were tasked to protect. It’s clear that the UN peacekeeping system needs systematic reform. Reform requires re-engagement from Western countries that have backed away from UN peacekeeping.

Last week, Canada’s Defense Minister Harjit Sajjan conducted an eight-day fact-finding mission in Africa as the country prepares to deploy Canadian Armed Forces to bolster one of the continent’s nine ongoing UN peacekeeping operations (though Sajjan prefers the term “peace support operations”). While the Canadian government has yet to provide details on the timeframe, size, or location of the troop deployment, the decision represents a substantial re-engagement with UN peacekeeping at a critical time.

Sajjan was accompanied by retired Lieutenant-General Roméo Dallaire, Canadian commander of the ill-fated UN peacekeeping mission to Rwanda in the early 1990s, and Louise Arbour, a former Canadian Supreme Court justice who served as UN High Commissioner for Human Rights from 2004 to 2008. Together, they visited the Democratic Republic of the Congo, Ethiopia, Kenya, Tanzania, and Uganda. Notably absent from the itinerary was Mali, home to the UN’s deadliest ongoing peacekeeping operation. Previous reports suggested that the UN peacekeeping mission in French-speaking Mali— UN Multidimensional Integrated Stabilization Mission in Mali (MINUSMA)— was a likely candidate to be bolstered by a Canadian deployment. Canadian officials demurred from identifying the significance of the countries visited.

If implemented, this deployment will make good on Prime Minister Justin Trudeau’s campaign promise to renew the country’s commitment to UN peacekeeping operations, as well as bolster Canada’s bid for a 2021 seat on the Security Council. In any case, Canada should be commended for exhibiting global leadership in reinvigorating a system in crisis.

Canada’s re-engagement could help to rebalance UN peacekeeping responsibility and improve the effectiveness of UN peacekeeping missions. Canadian military forces will bring expertise currently lacking from UN missions, including logistics, engineering, and intelligence-gathering. Deploying experienced commanders could also limit the instances when contingents of peacekeepers fail to protect civilians, such as when a camp of displaced persons guarded by blue helmets in Malakal, South Sudan, was attacked earlier this year. An internal UN investigation found that the contingent of Rwandan, Ethiopian, and Indian peacekeepers failed “at all levels” to protect civilians due to “a combination of inaction, abandonment of post and refusal to engage.” Thirty South Sudanese were killed and an additional 123 were wounded in the attack.

Canada is not alone in recognizing the need for western countries to re-engage with UN peacekeeping. Last year, the Obama Administration released a new presidential policy, the United States Support to United Nations Peace Operations, recognizing the importance of integrating more highly-trained troops into UN peace operations and pledging more US support, particularly more technological contributions. While the policy also indicates that the president will “strongly consider” providing more US military personnel to participate in UN peace operations, as of June 2016, the number of American military personnel participating in UN missions had slightly declined.

However, meaningful reform of peacekeeping in Africa requires much more than integrating more western troops into UN missions. The UN needs to end its culture of impunity when it comes to sexual misconduct of its forces. It’s worth noting that European troops—both French and Georgian—were responsible for appalling and well-documented instances of sexual abuse of minors in the Central African Republic in 2014. The UN’s tendency has been to cover up instances of abuse—including sanctioning whistleblower Anders Kompass who exposed the organization’s inaction over allegations of the sexual abuse in CAR—or to simply blame abuse on “a few bad apples.”

If the UN is serious about reform, it needs to address peacekeeper sexual misconduct systematically, including forcing member states to take action against their own forces who commit abuses, and commit to improving accountability within the UN administration.

UN peacekeeping is right to be worried about its credibility in Africa. Peacekeeping failures are broadcast much more loudly than successes. The continent is already witnessing a broader push by politicians to delegitimize international organizations. Ultimately, honestly confronting abuse and committing to substantive reform and accountability, rather than sweeping it under the rug, will prove more effective in protecting the credibility of UN peacekeeping in the long term.

The next Secretary-General would be wise to make peacekeeping reform a UN priority. In Africa, peacekeeping will continue to be crucial to protecting populations caught in conflict—South Sudan, Mali, and the DRC are all home to peacekeeping operations facing the threat of escalating violence. Beyond underscoring the country’s commitment to both the UN and Africa, Canada’s re-engagement will hopefully set the tone for other Western nations to commit more than funds to UN peacekeeping in Africa.

Julian Wyss is a Program Assistant at the Africa Council’s Africa Center. Follow him on Twitter at @JulianSWyss.