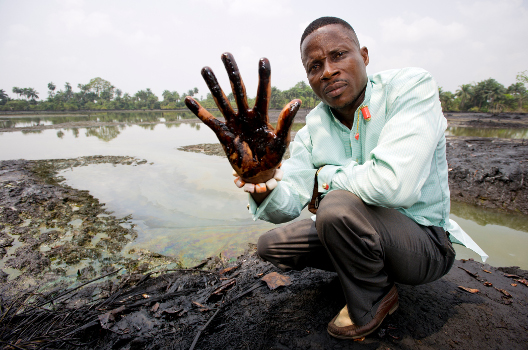 Even as Nigeria struggles to fight against Boko Haram insurgents in its northeast, a dangerous but forgotten conflict on the other side of the country is resurfacing. Before the rise of Boko Haram, the conflict in the southern Niger Delta region had long been considered the most potent threat to Nigeria’s security. Over the years, it has displaced thousands and cost the government a hundred billion dollars in lost oil revenue. Violence in the south has been at a low ebb since 2009, when Nigeria’s former President Goodluck Jonathan bought off rebel leaders with a generous package of stipends. But those amnesty payments are set to expire in December, and new President Muhammadu Buhari will have a harder time dealing with the region than his predecessor: unlike Jonathan, Buhari does not come from the Delta, and global declines in oil prices mean that he has far less cash to throw around.

Located in the southernmost part of the country, the Delta is made up of nine states that produce most of Nigeria’s oil. That has been an unexpected hardship on Delta residents, who have suffered the costs of oil production—in the form of underdevelopment and pollution—while sharing little in the benefits. From 2005 to 2009, these frustrations fueled a violent insurgency, in which various armed groups bombed pipelines, stole oil, and kidnapped foreign workers, while engaging in rampant smuggling and piracy. Then, in 2009, a combination of military pressure and cash-backed diplomacy by Jonathan (who was then vice president for the administration of Umaru Yar’Adua) produced an amnesty deal with the major militant groups. Attacks in the region dropped significantly.

Prompted by Jonathan’s defeat and the expiry of their stipends, former fighters are now threatening to end six years of relative peace. Mujahadid Dokubo-Asari, former leader of the notorious Niger Delta People’s Volunteer Force (NDPVF), threatened to remobilize his militia if Jonathan was not re-elected. Since the elections he has led a chorus of ex-militants in threatening violence should the stipends expire as scheduled. The armed forces have confirmed that former militant youth are rearming in greater numbers, and violence in the oil fields is on the rise.

Despite their threats, many of these old militants have enriched themselves through the amnesty payments, and are unlikely to risk their comfortable lifestyles to become fugitives again. The real risk of violence actually comes from those excluded from the 2009 amnesty deal, who are now organizing themselves into smaller but equally deadly groupings. Just days after Buhari’s victory, attacks were launched in Delta and Rivers States. In Delta State a minority nationalist group calling itself Urhobo Gbagbako exploded a pipeline to protest ethnic Urhobo marginalization from amnesty contracts. In Rivers State unidentified gunmen killed nine people, injured two others, and set fire to the home of a local politician. Earlier this month two foreign workers were kidnapped in an attack in Bayelsa State. The attackers killed two policemen in the process.

The armed groups of the Delta have never been as threatening as Boko Haram, but they are poised to do real economic and political damage. Increasing violence in the Delta would compound Nigeria’s fuel shortage crisis and hurt the legitimacy of the new administration. Nigeria’s economy—already in dire straits due to low oil prices—is arguably too fragile to withstand even minor disruptions in oil production.

Help is not on the way

In some ways, fighting Delta militias is more challenging than fighting Boko Haram. First, the Nigerian government will largely have to go it alone in the Delta. Its neighbors—whose armies have been invaluable against Boko Haram—are unlikely to get involved. Only Cameroon shares a border with the Delta, and the Nigeria-focused militants pose it no immediate threat to Cameroon or the broader region. Since the Delta militancy has less impact on the region, and now that it is no longer an importer of Nigerian oil, even the United States is unlikely to prioritize the conflict.

The Nigerian government can also expect less public support in countering militias in the South. In the Northeast, local support was instrumental in pushing Boko Haram out of occupied towns, and the government fought alongside civilian vigilantes. Local opinion of the Delta militants has been warmer because of frustrations with the oil industry and federal government. The Movement for the Emancipation of the Niger Delta (MEND), a loose umbrella organization of Delta militias, is so popular that it has considered forming a political party.

In its determination to pacify specific belligerents, the Yar’Adua-Jonathan administration missed an opportunity for long-term stabilization. Buhari now has the unenviable task of dealing with the consequences. During his inauguration, Buhari hinted he would allow the amnesty to lapse, but continue funding for those ex-militants who are completing training programs. Even this might prove impossible now that government coffers are emptier than expected.

The new administration might start with addressing decades of pollution in the region. A 2011 UN Environment Program report warned that restoring the Delta would require thirty years and one billion dollars, but Nigeria and the oil industry took little action. In May 2015, Shell compensated residents of Bodo—a Delta fishing community—for oil spills that occurred in 2008. Shell’s agreement with the residents of Bodo is noteworthy as the company paid compensation directly to individuals rather than to local or state leaders. Unlike some previous deals, Shell has also agreed to clean up the damage so residents can return to their livelihoods. Last year alone there were 550 oil spills in the Niger Delta. Taking the Bodo-Shell agreement as a model, the government should seek similar agreements with major extractors. Such agreements would bolster Buhari’s political capital in the south and lower the high unemployment rates in the Niger Delta. While it might take up to ten years before Bodo residents can return to fishing and farming, Shell’s payments are already having a positive impact on the local economy.

Buhari won his presidency on an anticorruption platform, but delivering on this will prove challenging in the Delta region. On the one hand, the Federal Government has long tolerated local corruption to keep local leaders from supporting militants. If the past is any guide, some politicians will use armed groups to fight Buhari’s efforts to clean house. In fighting corruption, Buhari also risks alienating some of the elites who supported his campaign.

On the other hand, cracking down on corruption is the only way to develop the Delta. Nigeria disburses oil wealth to its states, with additional shares for oil producing regions. Yet when fifty billion dollars in revenue can vanish even before the federal share, it is no surprise that little money reaches those who need it most. Buhari is likely to face backlash in the region either way, but continuing the current climate of impunity is not a viable option. MEND’s threats to resume violence over “absurd” allowances for politicians show that public anger against corruption is too serious to ignore. Buhari’s decisions to dismiss the governing board of the state-run Nigerian National Petroleum Corporation and to prioritize retrieving stolen funds are promising first steps.

When it comes to the Delta, Buhari has few good options. His identity as a northerner and inability to continue stipend payments reduce his political leverage with potential militants. Given the depleted government revenues, Buhari is likely to allow the stipends to lapse this year. Most ex-militant leaders would protest, some would issue threats, but few of them would return to violence. Instead, the real threat to the region will emerge from anonymous attackers and a few new groups who escalate attacks on police and oil infrastructure. Whether these attacks reach the scale of the previous insurgency depends somewhat on how much Buhari can improve quality of life in the region, but more on the patience of the local population towards his reforms.