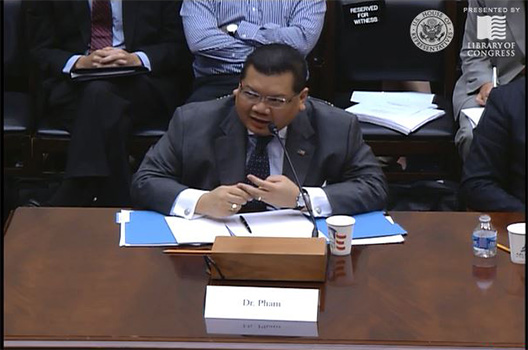 Nigeria’s Boko Haram militant movement has grown increasingly virulent since 2009, a change visible in the group’s capacity, tactics and ideology, according to J. Peter Pham, director of the Africa Center at the Atlantic Council.

The extremist group now appears not only capable, but willing to exercise control over significant swathes of territory, Pham said. With that, it is metastasizing into something closer to a classic guerrilla insurgency, in geopolitical effect if not in tactics or doctrine, he told the subcommittee.

Boko Haram has elicited support among some of Nigeria’s marginalized Muslim communities, Pham said. That support—whether proactive, or tacit and based on a lack enthusiasm for the government—suggests that security measures alone will be insufficient to overcome what has become a regional challenge.

Instead, Pham said, Nigeria and its international supporters should build a comprehensive strategy to respond to the burgeoning threat posed by Boko Haram. It should include specialized training for Nigerian security forces, a more aggressive and forthright approach from the Nigerian government, a response to the legitimate grievances of populations in Nigeria’s impoverished north, which has become Boko Haram’s stronghold, and strengthening regional cooperation.

Regarding the extent of the military’s dysfunction, Pham offered a stunning example:

“It should also be noted that not only has the Nigerian military been largely ineffectual in its efforts to contain—much less, crush—the burgeoning insurgency, the very military unit now spearheading the fight against Boko Haram…is so dysfunctional that just last month its soldiers opened fire on their commanding general.”

Nigeria’s government for years was overly complacent in responding to the militant group’s growth, and its containment efforts have been hampered by “ham-fisted” security operations and even complicity with Boko Haram from within official structures, he said. The group has sympathizers or enablers throughout government agencies, he added.

The government needs a more measured and multifaceted response, Pham said, particularly one that better addresses the “legitimate political, economic, and social grievances that have rendered significant segments of the population in northern Nigeria amenable to Boko Haram’s radical message, if not the militants’ methods.”

Addressing the movement’s potential ties to international terrorist groups, Pham explained that Boko Haram is not so much an affiliate of al Qaeda as a “friend of a friend.” Such ties may extend to other violent non-state actors, he said.

Regarding the US strategy, Pham said the Obama administration’s measured response has “so far been appropriate to the strategic and operational realities on the ground. But what next?” He added:

“We must balance our near-term objectives with a policy approach that is sustainable over the long term and that requires not only resolve and patience, but also a commitment to be comprehensive of all the factors involved and to embrace all the values— legal and ethical, American and universal—which are at stake in this struggle.”

For more on the growth of Boko Haram, read Pham’s full prepared remarks. For further analysis and background, watch the Atlantic Council’s Deputy Director Bronwyn Bruton discuss the April kidnappings and the international response to them via social media.