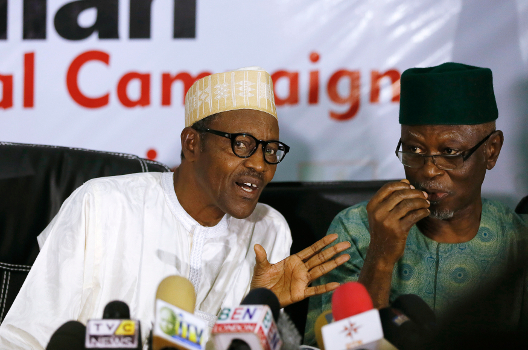 Late Saturday evening local time in Abuja, Nigeria’s Independent National Electoral Commission (INEC) announced that the country’s presidential and parliamentary elections, originally scheduled for February 14, would be postponed until March 28, while the gubernatorial and state legislative elections scheduled for February 28 would be held April 11. The decision was taken at the urging of the security services which not only could not guarantee the safety of election official and voters in four northeastern states—Borno, Yobe, Adamawa, and Gombe—where the Boko Haram insurgency is most active, but also advised that the deployment of military forces during the coming weeks to operations currently underway against the militants meant that there would be insufficient personnel to lend the security assistance normally provided throughout Nigeria to police and other civilian authorities during election periods.

Even as INEC Chairman Attahiru Jega took pains to assure Nigerians that “no one is forcing us to make this decision, this is a very weighty decision,” he acknowledged that “many people will be very angry and annoyed.” That is no surprise since, as former Assistant Secretary for African Affairs Constance Berry Newman and I noted in an op-ed on Friday, the contest between incumbent President Goodluck Ebele Jonathan and onetime military dictator Muhammadu Buhari is the most competitive presidential race since the West African country’s transition from military to civilian rule in 1999—and the stakes could not be higher given the security threats, humanitarian crises, and financial pressures buffeting Africa’s biggest economy. Further complicating things is the regional, ethnic, and religious fissures embodied by the two candidates: Jonathan, who hails from a small ethnic group in the oil-rich southeastern part of Nigeria, is a Christian, while Buhari is a member of Nigeria’s largest ethnic group, the Fulani, from the economically laggard northern part of the country and is a Muslim.

The security concerns cited by the electoral commission for delaying the vote are, prima facie, valid. Nigeria’s National Security Advisor, retired Colonel Sambo Dasuki, raised similar points in a January speech at Chatham House. As I noted in testimony before the US Congress last month, with numerous local government areas in northeastern Nigeria either under the control of the Islamist militants of Boko Haram or otherwise rendered unsafe, it would be impossible to organize voting across the entire territory of the Federal Republic of Nigeria and whether satisfactory arrangements can be made for displaced persons was questionable. In addition, millions of voters outside the states most impacted by the Boko Haram insurgency could potentially be deterred from voting by fear of suicide bombing or other attacks mounted by the terrorists. With about 120,000 polling stations across Nigeria, even if one sent the entirety of the Nigerian army to guard just the vote in the north—which obviously cannot happen given the insurgency and the fact that, finally, a regional military effort is underway against it—that deployment would barely result in one soldier at each location.

Under such circumstances and given that, if previous voting patterns are any indication, the voters most likely to be disenfranchised would be supporters of Buhari, there was a real danger that, should he lose, his supporters could plausibly refuse to recognize the legitimacy of an election in which so many of them were unable to express themselves. Thus, as the INEC chief put it, it is his hope is that with the rescheduling, “the security services will do their best to ensure that the security environment needed for safe and peaceful conduct of the 2015 elections is rapidly put in place.”

Although the decision to postpone was couched in security terms and INEC claimed that, security concerns aside, it was “substantially ready” for the polls to take place as scheduled, the electoral body also admitted that it was far behind in its distribution of permanent voter cards (PVCs) to registered citizens. As of this past Thursday, only some 45 million out of the 68 million biometric identification documents that needed to be delivered had been so—leaving roughly one-third of the electorate without the requisite key to exercising their rights. Interestingly, the success or lack thereof of the PVC distribution effort has varied widely from state to state with some almost completing the task, while others are not even halfway there. Interestingly some of the highest distribution rates have been in areas hardest hit by the insurgency, perhaps because of all the attention focused there recently: in Gombe, for example, some 95 percent of the PVCs have been delivered, while Yobe has an 80 percent distribution rate. Other areas in the north have likewise fared well, with Kaduna having an 87 percent distribution rate and Kano one of 64 percent. In contrast, in Lagos, by far Nigeria’s most populous state, barely 38 percent of the voter identification cards have been handed out; things are marginally better in nearby Ogun State, where half the voters have received their documents.

By the way, one has to presume that the PVC distribution rates are the product of exceedingly poor logistics rather than manipulation by the incumbent People’s Democratic Party (PDP) since the states just mentioned with the higher distribution rates were all ones which the PDP lost in the last election, sometimes by wide margins, while it won wide majorities among the voters in both Lagos and Ogun who are currently bereft of their papers. Moreover, one would have wished that the decision to postpone had been made with more notice (full disclosure: I was packed and preparing to travel to Abuja as part of an international delegation of election observers), but then again Jega the same INEC head postponed the 2011 parliamentary polls on the day of the vote itself and pushed back the presidential election that same year by a week with just slightly more notice. When it was all done, however, then-US Assistant Secretary of State for African Affairs Johnnie Carson reflected a broad consensus when he deemed those polls Nigeria’s “most successful elections since its return to democracy” and “a solid foundation for strengthening its electoral procedures and democratic institutions.”

The postponement of the upcoming vote, however justified, will, unfortunately, likely exacerbate an already very tense political climate. The chairman of the main Nigerian opposition party, the All Progressives Congress (APC), while appealing to its supporters to desist from violence, nonetheless called the postponement as “highly provocative” and qualified it as “clearly a major setback for Nigerian democracy.” Ideally, as US State Department Deputy Spokesperson Marie Harf declared on Friday, the United States would have preferred to see the elections take place on time. Secretary of State John Kerry issued a statement expressing “deep disappointment” in the decision to postpone.

Nevertheless, the reasons for the delay are weighty and, in any event, the electoral commission acted within its legal authority. Nothing is gained by continuing to litigate a done decision; what is more important is what is to be made of the new reality. If Nigerian authorities avail themselves of the time to work with neighboring countries to significantly degrade the threat of Boko Haram as well as to improve the processes for administering the eventual elections themselves—and the voters’ confidence in the fairness and transparency of those systems—then the waiting period may prove to be a turning point, both for the nation’s stability and its democratic future. If, however, they fail to seize that opportunity, the crisis into which Africa’s most populous country could plunge may prove far greater than any of the present risks they presumably just tried to dodge.

Image: Nigerian opposition presidential candidate general Muhammadu Buhari of the All Progressives Congress (APC) party speaks to party chairman John Oyegun (R) during a news conference in Abuja February 8, 2015. Buhari called for calm in the country and cautioned against any violence following postponement of elections. Nigeria's electoral commission has postponed elections due on Feb.14 to March 28. REUTERS/Afolabi Sotunde