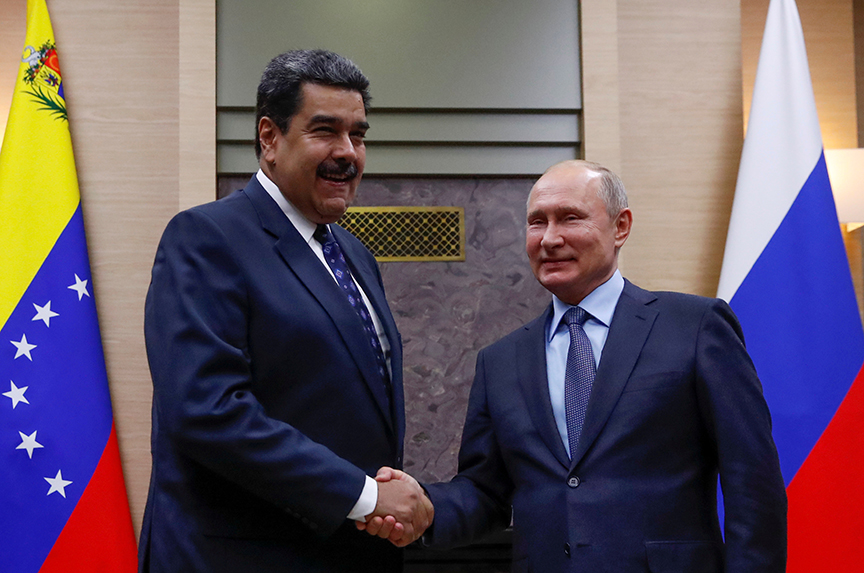 The Russian government has been instrumental in preserving the Maduro regime, despite years of intense domestic and international pressure favoring a democratic transition. Russia, under the auspices of President Vladimir Putin, has provided the regime invaluable diplomatic leverage, security personnel, and material, as well as an economic lifeline. Until recent sanctions ended the practice, this has taken the form of support from Russian oil company Rosneft to buy, transport, and sell Venezuelan crude. That trade allowed state-owned Petróleos de Venezuela, S.A. (PDVSA) and the Maduro regime, by extension, to profit off of Venezuela’s massive natural resource base. Indeed, US Secretary of State Mike Pompeo has stated that Maduro might have forfeited power and left Venezuela in April 2019 had his Russian backers not convinced him to stay at a crisis moment.

In March 2020, Rosneft ended its formal operations in Venezuela after two successive rounds of new US sanctions targeted its subsidiaries, which were involved in the trade of Venezuelan crude oil. Although the forced transfer of assets is a notable success for the US-led sanctions program, it is unfortunately a limited one that did not signify the end of Russian sway over Caracas. Rosneft ultimately sold its Venezuelan assets directly to a Russia state-owned company, effectively ceding them to the Russian state itself and Putin’s personal oversight. As a result, Putin has authority over Rosneft’s previous joint venture shares with PDVSA; Russia, therefore, will remain a key player in the Venezuelan oil sector for years to come, with legal rights to high-value assets and a major stake in the future governance of Venezuela, which may protect these interests. Small wonder, then, that the Russian government has opposed the US Department of State’s Democratic Transition Plan, preferring a client state and beholden Maduro government over the uncertain future of a democratic, free Venezuela.

With the price of crude oil at historic lows and the Venezuelan industry barely functional after years of production declines, it is clear that Putin’s interests in Venezuela are not economic but geopolitical. Under Putin, Russia has dramatically reasserted itself as a global power. In recent years, it has emerged as a broker throughout the Middle East in Syria, Kurdistan, and Libya. In this game of power projection, Venezuela is the latest acquisition and a valuable foothold in the Western Hemisphere. Russian influence in Venezuela undermines the Monroe Doctrine and US national security interests, and could perhaps become a valuable bargaining chip to demand concessions from the US government elsewhere (such as in Crimea). With the Russian government already under a range of US sanctions as a result of its aggression in Ukraine, maintaining control over and assets in Venezuela is a low-cost and low-risk proposition.

The US strategy for a democratic Venezuela must recognize these realities and focus on containing Russian influence in Venezuela, as it cannot end it. The administration must also recognize that a democratic transition cannot succeed without a steady economic recovery, led by the country’s valuable oil sector. US policy must carefully thread the needle of mitigating Russian efforts to insulate the Maduro regime, while also preserving a future pillar of the Venezuelan recovery and limiting the impact of sanctions on an already desperate humanitarian situation as Venezuela struggles with the spread of COVID-19.

The recent Democratic Transition Plan is an excellent initial step towards these goals; it provides a cogent and just framework for how the country’s various factions can come together and jointly develop a legitimate transitional government and conduct free elections. Even though the Maduro regime has scoffed at the proposal, it demonstrates to Venezuelans both in-country and abroad that a fair transition (free from Russian domination) is possible. The United States and international sanctions programs should build on recent successes and continue to target any entities that support illicit trade (e.g., unlicensed trade of crude oil volumes) as well as illegal activities like Amazonian mining that provide income avenues for the Maduro regime. A recent report noted that Maduro’s generals receive bribes totaling hundreds of thousands of dollars each month from the illicit gold trade, effectively buying their loyalty to his regime.

As US sanctions pressure the Maduro government, US policy must also protect Venezuela’s vulnerable people. The US government should maintain its policy in favor of “swaps,” allowing crude oil to be exchanged for explicitly humanitarian supplies, such as food, as well as protective and medical equipment (the ongoing Libre Abordo deal is one example). The US might also consider whether critical energy supplies could qualify under the umbrella of humanitarian aid. The stability of electrical power, for example, and the provision of gasoline will be as essential to Venezuela’s medical personnel as they battle COVID-19 as much as protective masks and ventilators.

US and other Western companies engaged in the oil sector will also have an important role in Venezuela’s future. These companies need to be able stay in country to protect their assets, since a Western private sector presence is indispensable to containing Russia’s influence and control. Western companies will be the only material counterweight to the direct influence of the Russian government in the energy sector (through its state-owned entity) once all sides are engaging with a transitional government. With oil demand at record lows, Venezuelan crude production hovering around 460,000 bpd last month (and effectively priced below operating costs at $10 per barrel) and Rosneft no longer trading its cargoes, the regime earns little from the oil sector and has focused more and more on illicit revenues. Sanctions are working. The US government should resist the temptation to force all remaining Western companies out with fresh sanctions that will only secure Russian influence, exacerbate the humanitarian situation, accelerate regional migration and draw the consternation of anxious European allies at a time of global pandemic.

Rarely is the right path also the easiest path. With an eye to the future, the US must craft its Venezuela strategy carefully to undermine the enablers of an unjust regime and contain the malignant influence of the Russian government, while protecting the Venezuelan people and preserving the country’s oil sector and economy for a better future.

David L. Goldwyn is chairman of the Atlantic Council’s Energy Advisory Group and a fellow with the Adrienne Arsht Latin America Center. Andrea Clabough is a senior associate at Goldwyn Global Strategies, LLC.