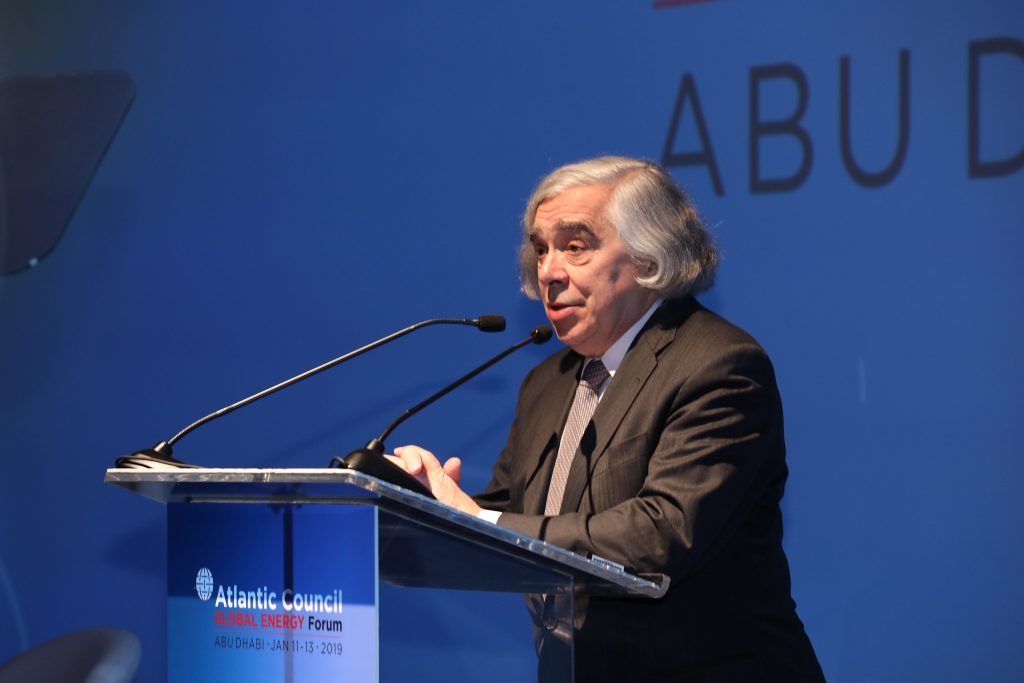 Former US Secretary of Energy Ernest Moniz speaks at the Atlantic Council Global Energy Forum in Abu Dhabi on January 12, 2019.

The role of new energy technologies to meet future energy demand was a focal point during the Atlantic Council Global Energy Forum (ACGEF) in Abu Dhabi. Meeting the increasing demand for energy usually raises concerns about international climate objectives. While new energy technologies promise a pathway to meet this increasing demand without sacrificing emission reduction targets, ultimately, policymakers will need to provide the frameworks necessary to harness these technologies, so as to deliver on sustainability goals.

Energy systems constitute processes that include a primary energy source, infrastructure for this source to be deployed, energy carriers for transportation and distribution, another conversion to get the desired form of energy needed (e.g., refining crude oil into petroleum products), and services. For over a century, fossil fuels managed to position themselves well in the global energy map by virtue of their value and ease of use in each of the five stages of the system. Recently, new energy technologies are demonstrating their capacity to change the energy map and reshape the geopolitics of energy, but they must overcome significant challenges to succeed at scale.

Energy has always been a cornerstone for development, since a technological society cannot develop without continuous increase of energy consumption in both absolute and relative value. There are few, if any, credible development scenarios that assume lower demand or consumption of energy. Almost every scenario is based on trends that would lead to an enormous growth in the demand for energy in the coming decades. At the same time, a massive reduction of greenhouse gas (GHG) emissions, especially CO2 emissions, is needed so that the world can achieve the goals of the Paris agreement. This is a dilemma, as the increase in energy consumption is generally associated with an increase in GHG emissions. Overwhelming this tension is the task of the future energy policy.

Local air pollution and its associated health costs have led many societies, especially in emerging economies in Asia, to recognize the importance of adopting clean energy technologies. According to the World Health Organization (WHO), 4.2 million deaths every year are attributed to exposure to ambient air pollution. Exposure to smoke from dirty cookstoves and fuels has led to 3.8 million premature deaths globally in 2016—more than malaria, tuberculosis, and HIV/AIDS combined.

According to the International Energy Agency (IEA)’s Energy Access Outlook 2017, an estimated 1.1 billion people—14 percent of the global population—do not have access to electricity. Additionally, more than 2.8 billion people—38 percent of the world’s population—lack access to clean cooking, typically using inefficient stoves or open fires in poorly ventilated spaces. In the Outlook 2017’s New Policies Scenario, electricity is projected to reach 24 percent of total final consumption of energy by 2040. This means that electricity growth will be driven mainly by developing economies. But it will be difficult to ensure that this growth is not at the price of international climate objectives.

The advancement in new energy technologies during the last few years has shown that the world can find a pathway toward transformation of the global energy sector from fossil fuel to low carbon. As developing economies are driving energy demand globally, renewables give us a tool for solving the equation of development and curbing emissions generated from increasing consumption of energy. Since 2010, the average cost of electricity from solar PV and wind energy has fallen by 73 percent and 22 percent respectively. Renewables also present a solution for enhanced energy security by decreasing reliance on energy imports and using oil and gas as foreign policy instruments.

Similarly, renewables can improve the resilience of the energy systems via distributed architectures which can protect against the failure of an entire energy system. This implies that grid extension is no longer the only option for expanding energy access. Off-grid and mini-grids solutions for electrification represent a suitable alternative for many countries that do not have the financial capacity for the burden of financing infrastructure and grid extension. However, the intermittency and seasonal nature of renewables still represent a challenge for existing infrastructure and systems. Not only is occasional insufficient power generation a problem, but conversely the grid may not always be able to absorb excess power created by an unexpected windspeed increase or stronger solar radiation. Building the level of storage necessary to contain the excess energy, rather than curtailing it, has so far proven expensive. According to a recent study by researchers at MIT, coupling battery storage with renewable plants is a weak substitute for large flexible natural gas combined cycle plants that can be tapped at any time and vary output levels to meet shifting demand throughout the day. This may, of course, be poised to change as technology rapidly develops.

In his remarks to set the energy scene during ACGEF, former US Secretary of Energy Ernest Moniz highlighted that electricity decarbonization is the lead horse in the race to lower emissions. The power sector now attracts more investment than oil and gas combined. Electricity is the fastest-growing source of final energy demand, and over the next twenty-five years it continues to outpace energy consumption as a whole. A brief report from the International Renewable Energy Agency (IRENA) prepared for COP24, Renewable Power: Climate-safe energy competes on cost alone, highlighted that the global weighted average costs for electricity from all renewable technologies except concentrating solar power (CSP) now fall within the range of fossil fuels, which in 2017 was between $0.047 and $0.167 per kilowatt-hour (kWh). Renewable energy sources have nearly zero marginal costs, and some of them, like solar and wind, enjoy cost reductions of nearly 20 percent for every doubling of capacity according to the DNV-GL Energy Transition Outlook 2018. The regulatory structures in place today have not dealt with zero marginal cost in energy before. This underscores the importance of reforming them in concert with changing technologies.

With the spread of renewables and electrification, the cross-border trade of electricity is expected to grow and create new opportunities for regional cooperation among neighboring countries. This will redraw the energy trade routes which will also create new geopolitical maps. The alliance between the United States and Saudi Arabia is a prime example of strategic relationship depending heavily on oil. However, as economies across the globe become less dependent on oil, this strategic relationship may evolve significantly. We have already seen the rapprochement between Saudi Arabia and Russia to sustain their oil production in the face of rising US shale production. Unlike alliances built on fossil fuels, these new renewable technologies alliances are more flexible with electricity moving in both directions (import/export) between countries within a complex network of importers and exporters that will curb the potential to use renewable electricity as a geopolitical weapon. But as suggested in the IEA’s “Electricity security across borders,” this does not mean that we should underestimate the importance of governments developing appropriate arrangements to enable electricity to flow freely in well-regulated and transparent markets.

While new technologies are leading the global energy transformation, we still face technical challenges (such as fluctuation, storage, and response to peak demand) as well as policy challenges (including renewable targets, emission reduction targets, and subsidies). However, these new technologies present a valid solution for the complicated equation of development and energy-related emissions. And the current level of growth of new energy technologies and innovation strongly suggest that energy business is no longer as usual, and the pace of this transformation will be dependent on how the political choices could accommodate these new technologies through clear governmental support.

The author would like to acknowledge the contributions made to this article by Atlantic Council Global Energy Center Deputy Director for Climate and Advanced Energy David Livingston.

Mahmoud Abouelnaga is an Obama Foundation Scholar with the Harris School of Public Policy at the University of Chicago.