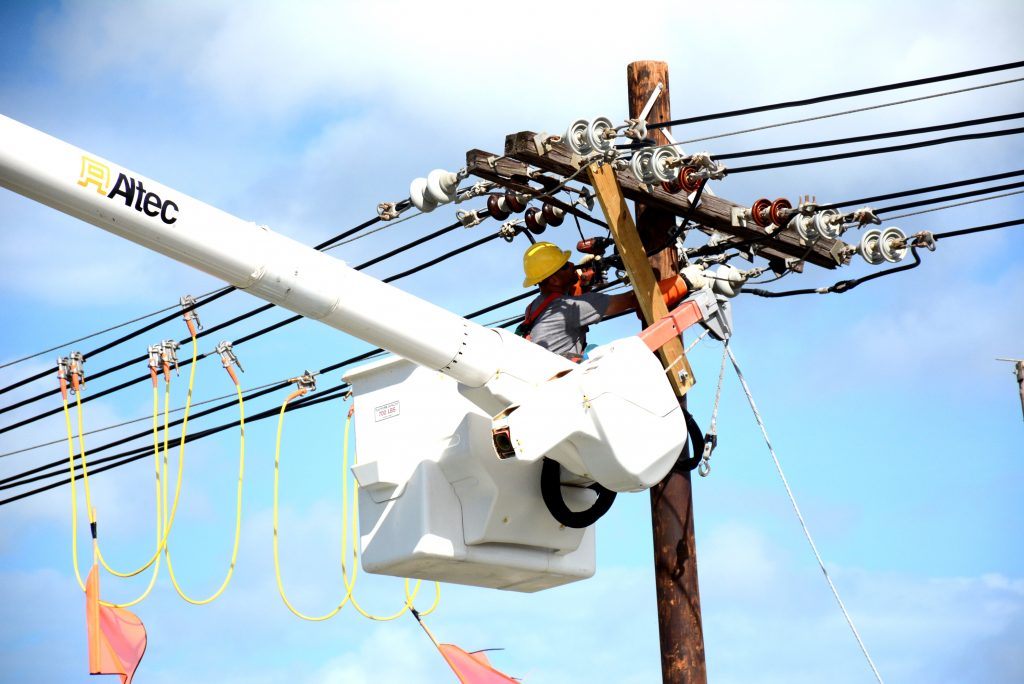 A US Army Corps of Engineers contractor works on repairing power lines near San Juan, Puerto Rico as part of the agency's work to help restore power on the island after Hurricane Maria (photo by: Courtesy Photo).

Following the tragic weather events of 2017, the state of Puerto Rico’s infrastructure, particularly energy infrastructure, has been a contentious issue. In fact, even before Hurricane Maria, Puerto Rico’s electric service provider, Puerto Rico Electric Power Authority (PREPA), had been struggling with mismanagement and teetered on the brink of financial collapse for years. The damage caused to the electric system by Hurricane Maria reflected years of deferred maintenance and the slow recovery exposed the deficiencies of management.

This combination of storm damage and a long history of mismanagement led to bankruptcy, forcing drastic action. While there are key challenges ahead, the government has taken a crucial step, passing the Puerto Rico Electric Power System Transformation Act, which was signed into law by Governor Ricardo Rosello-Nevares on June 20, 2018.

The new law sets up a process of “transformation” of Puerto Rico’s electric industry through a combination of:

At the turn of the 21st century, this kind of massive industry transformation was attempted in both Central and Eastern Europe and Latin America with mixed success. In the case of the former communist Central and Eastern European states, the process involved commercializing state owned electric enterprises, restructuring asset ownership, introducing billing for electric services (as electric service often came with the state supplied rent free apartments), and establishing “independent” regulatory agencies under the US or UK model.

The experience in Europe and Latin America has proven that each of the three initiatives, privatization, restructuring and establishment of regulation, has proven difficult to implement and sustain. Puerto Rico’s attempt to simultaneously do all three is admirable. However, it also represents a formidable challenge, especially when combined with new legislation, unproven policymakers, and newly appointed executives and regulators.

The electric industry in Puerto Rico

PREPA serves approximately 1.5 million customers out of Puerto Rico’s population of 3.6 million.  All electric service is provided by PREPA, and residential electricity rates were around $0.20/kilowatt-hour (kWh) in 2017. Power plant ownership is mixed, with PREPA owning 4,878 megawatts (MW) of diesel fueled power plants, which provide about 66 percent of the island’s power needs. Another 961 MW of generation is owned by independent power producers, which use coal and natural gas, and sold to PREPA under power purchase agreements (PPA).

Management of PREPA recently experienced turnover, with the departure of a seasoned electric utility executive familiar with restructuring and operating under close regulation.

Any privatization, or transfer of government assets to private owners, in Puerto Rico is complicated by the island’s bankruptcy proceedings and the financial and physical condition of PREPA. The bankruptcy is under procedures established by the Puerto Rico Oversight, Management and Economic Stability Act (PROMESA), which reverts to privatization procedures used by Puerto Rico’s Public Private Partnership Authority (known as P3) with technical assistance from the newly reestablished Puerto Rico Energy Commission (PREC).

Privatization under the Act envisions the sale of all PREPA-owned power plants to private operators under future PREC regulation and subjects PREPA’s transmission and distribution system assets to a concession agreement taking the form of a lease for operation of the system, but with the assets remaining under state ownership. While concessions of this type for infrastructure are more commonly found in the water industry in France and other European countries, they exist in the United States in the operation of a handful of municipal water and wastewater systems.

For privatization, investors will need to know the regulatory and pricing rules, or contracts which will apply to their power plants, before bidding. In Europe and elsewhere, the required information typically includes advance knowledge of wholesale market structure and how prices will be set, how retail rates will be regulated, any specific conditions of operation, authority of the regulator over these matters, and so on. These determinations have usually been included in a combination of sales contract language and legislation empowering the regulator.

The PROMESA Act requires that no sales can occur without a PREC-issued Energy Compliance Certificate, which must be issued within fifteen days of application, and each sale needs to be approved by Puerto Rico’s Legislative Assembly and Governor.

Restructuring, in electric industry terms, is the separation of the ownership of electric power generation, and sometimes transmission, from the previously vertically integrated electric power enterprise. Electric utility assets in the United States are predominantly owned by investor-owned utilities (IOU), and around fifteen states have fully restructured their retail electricity markets, separating generation ownership from the owner of transmission and distribution grids and allowing retail customers choice of electric suppliers. Another seventeen states do not allow retail access but have restructured wholesale markets.

The separation of power plants from PREPA and sale to individual private owners would restructure the industry in Puerto Rico and set it up for potential future competitive wholesale, and eventually retail electricity markets.

However, power plant buyers will need to know whether, from a financing perspective, there is an acceptable starting position for wholesale electricity prices and wholesale sales conditions. An initial starting position would probably not involve an untested wholesale island power market. In the first ownership round, power plant buyers will want, and probably need, power purchase agreements (PPA) with the new transmission and distribution concession operator. At this point, it is unclear as to whether the PPAs would be approved by PREC, the regulator, or as part of the sale agreement approved by the governor and legislature.

Restructuring in the United States, United Kingdom, Europe, and elsewhere has usually involved the parallel development of a wholesale market, which, although not required for restructuring, is a prerequisite for any future retail market.

The PREC was established in 2014 with three members, which the 2018 Act expands to five, appointed by the governor with senate confirmation for staggered six-year terms. The PREC will be deeply involved in the restructuring and transformation of Puerto Rico’s electricity market, as they are directed to provide “technical, expert, financial and human resources assistance to the Authority” for each PREPA transaction.

In Central and Eastern Europe, newly established regulatory agencies in the 1990s faced problems similar to PREC’s: poorly structured enabling legislation, inadequately trained commissioners and staff, preservation of independence from day to day political meddling, and opposition from ministries with prior authority.

In the past two decades, public service commissions in the continental United States, with a hundred-year history in most cases, have demonstrated that restructuring and competition issues are formidable, contentious, and tricky. Many states are still grappling with these issues today and in one case, California, a complete reversal of direction was found necessary.

While the issues will be new to the newly reconstituted PREC, there is plenty of experience and knowledge in the US regulatory community to assist in the process.

The Act describes this unprecedented legislation as the beginning of “the process to transform the Island’s electric power system into a modern, sustainable, reliable, efficient, cost-effective, and resilient to the ravages of nature.”

While the necessary components for a successful transformation of Puerto Rico’s electric industry are in the legislation, the timetable is very tight and expectations are high. However, if Puerto Rico is able to draw lessons from experiences in the US and EU, Puerto Rico will have the wind at its back.

Branko Terzic is a senior fellow with the Atlantic Council Global Energy Center. You can follow him on Twitter @BrankoDuTerzic

This piece is the second by the author on Puerto Rico’s electricity system. You can read the first piece here. The government of Puerto Rico has selected “concession” as the method of privatizing the transmission and distribution assets of the commonwealth’s electric system, Puerto Rico Electric Power Authority (PREPA). This privatization through “concession” of transmission […]